Login to add items to your list, keep track of your progress, and rate series!
Description
Year XXXX, The Age of Chaos, a dictator meets a vampire who has awaken from 300 years of slumber and is hungry for some tasty blood. 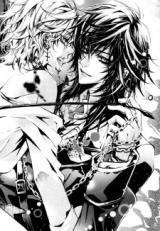 Meh
by suzakufire
July 24th, 2021, 12:05am
Rating: 2.0  / 10.0
R8pe themed, which is common for the 2000s I guess. Plot was all over the place, felt like the artist just dumped everything they thought sounded cool into one story but didn't bother to try and make it make sense. The focus was of course on the smut itself, everything else seemed to be just there to set the scene (terribly at that).

dengreous little pleasure
by dorsa_al
April 21st, 2016, 8:24am
Rating: N/A
there is no special story . it's just more about sex and violence. I mean you can't expect more from 27 pages of one shot yaoi. but generally is good. art is beautiful and yaoi is sensational.

ooooooooooo~
by blueshadows
December 15th, 2011, 3:30pm
Rating: 7.0  / 10.0
Gorgeous, pretty, beautiful rt. so epic. but the story was a bit of a stretch. like, what? a vamp can be tken over (pretty much) by a human? anyone read vampire knight, twilight, or any book with a vampire(s) in it? notice how if they aren't strong, they have superpowers? like, wth happened? ans: it ll died. but really pretty.
Was this comment useful?  Yes

Nice art... really nice art fullstop
by KittyTeea
September 22nd, 2011, 12:06pm
Rating: 7.0  / 10.0
Loved the art, but the story... don't know what to say about it. And as short as it is, it still repeats itself, I mean the vampire bites, the guy takes his pay, and they do this twice. If it was longer it's not hard to imagine what would happen. As for the rape, it was more like the kid vampire (or the guy was just huge in comparison) discovered something new, for a 300 years old vampire he didn't fought much and his analogies at the end were almost funny. Well since it was so short it didn't bother me and again I loved the art.

LOL Vampire!
by Sacheverell
June 11th, 2011, 2:47pm
Rating: N/A
I think this one was made worse by being scanlated. It's not that the group did a bad job if if I was looking at this in a language I couldn't read at all, I could have easily imagined this being a man who likes to do everything violently waiting for his vampire lover to show up for some sexy time. Naturally the whole "capturing" thing is just a game between them.

But no, this human does really capture a 300 hundred-year old vampire. What? Lol! I rated it a six overall because as wonderful as the art is, I feel like the "plot" on its own is like -8. We could only imagine how great this might have been if the plot was on part with the art.
Was this comment useful?  Yes

what lylicadjdjdxn says lol
by juls91
December 19th, 2010, 11:49am
Rating: N/A
when the human took the 300 year old vampire soo easily i was like huh? wtf lol but it was hot lol i liked the art and is just for a fast sexy read lol
it was good, for just sex hahha xD
Was this comment useful?  Yes

shame that it wasnt longer, wudda made a great long running series
Was this comment useful?  Yes

ha
by Trussardi
May 21st, 2010, 9:04pm
Rating: 2.0  / 10.0
The art is exceptionally gorgeous. However the plot only excels at achieving great levels of stupidity. I think this is one of the few cases where scanlating made it worse only because you will know what is going on, and it is better to look at RAWs given that you cannot read them.
Was this comment useful?  Yes

*ahem* as for the story.. the Jahan guy is sexy and the Yuan is cute!! see! i remembered the names!! awww.. if only this was a romance manga..
Was this comment useful?  Yes