Furuya's obsessed with zombies. He collects any figurines, watches any movie, and plays any game with the living dead, and is even only interested in zombie girls. When his cat dies, Furuya begins trying to raise it from the dead using an ancient book of the occult he bought from a shop. But what will happen when he sees the idol of a nearby all girl's school walking close to where he conducts his experiment, wishing to die and be reborn as a different person? 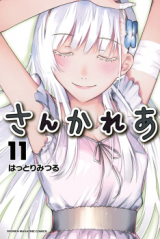 Unfortunately..
by Gandeloft
February 5th, 2018, 3:40am
Rating: 3.0  / 10.0
I think that this is the worst manga for me that I've read. I don't know, I wish I had enjoyed it rather than rolled my eyes as much as I did due to the amount of cliche/things I knew would happen. That could still all be cool though, but this was all written like, as if for a boy who is going to have his first manga experience with Sankarea. I think that yea, as a first manga, for someone unintroduced to the eastern media(anime, LNs, manga), this would be a phenomenal experience actually...
Other than the plot points, I knew as well as I know how much 2+2 is what the characters would say and do.
Rea is beautiful and nice, the scientist girl (I don't even remember her name.. :/ ) is cute, and like with many stories, the ending of this one is the best thing for me. Actually depressed me , what the hell is that ending..
Such a low rating because I'm upset over how good I believe this concept for a story could've been good to me, but it wasn't.

I repeat, that ending, what the hell author.

Edit: 8th March 2021: It's like the author had a great concept but executed it poorly, at the very least for me. Thinking about Sankarea today out of the blue, I've concluded that that ending is a bad thing of the sort that's almost disrespectful to the reader who appreciates and cares for Rea, to the reader who earnestly opened their heart to this story. I don't think it was intentional, I just think it's that bad of an ending. I might be forgetting something, but ultimately, this is my takeaway from this story.

Nah, read something else
by Seregosa
August 14th, 2017, 10:50am
Rating: 5.0  / 10.0
It's worth reading if you have nothing else to read, but it's just average. The author is taking himself too seriously yet is not good at writing serious plot developments. The jokes are boring and I found myself hating most of the characters for some reason.

The ending was a steaming pile of shit to say the least where the author tried to go for a very "serious" approach and finished it off in a way that made everything seem lacking and boring. We also don't even get a proper explanation of what happened afterwards, who ended up with who and other stuff such as how long the mc lived and did the mc get turned into a zombie too in order to keep the heroine company, but looking at the extra chapter that doesn't seem to be the case at all. So, the story was perhaps a 6, slightly above average, but the ending downed it all to a 5 with massive minus points.

What do you have to give around here to get some likable characters and a good, happy ending? Sigh.
Was this comment useful?  Yes

cute story
by butako chan
March 11th, 2017, 3:38pm
Rating: N/A
If you are up for a light hearted story that you REALLY shouldn't think hard about, then this is the perfect read for you. It's funny (not laugh out loud funny), and doesn't take itself seriously at all. So don't expect anything that's deep.
Was this comment useful?  Yes

Hattori Mitsuru has really grown as an author.
by Glad-kun
December 14th, 2014, 11:39pm
Rating: 9.0  / 10.0
His silliness and combination of dirtiness with certain naivety, coupled with art-style feel really good. Even with some weaknesses when tackling serious subjects(which doesn't come up often, but it was the case for Otogi no Machi no Rena) I always liked his style. And with Sankarea his writing grew and went where it didn't before. The dark place.

Sure, it's fairly easygoing in the beginning, but it goes where I didn't expect it to. The dark place.

I expected it to be more like a standard themed romcom manga and it exceeded my expectations. But every time at the last moment it took a step back. This, and a certain plot point really took away from the manga and that's why it doesn't get a perfect score. Details in the spoiler.

Spoiler (mouse over to view)
Amnesia? Really? WHY? It's such a crude and overused cliche. I mean, sure, it helps the story reach the ending... but it's just lazy.

And there was always a step back at the last moment before committing to the "dark" themes. The most rage-inducing example was the second fakeout in the end. The first fakeout after the kiss was amazing. Everything was going bad than took a turn for a good ending and then *BAM* REALITY CHECK! And then... Nah... he survived his heart being eaten. Sure... It made me really angry and frustrated.
Commit to the bad ending or a good one with a bitter aftertaste(like she ate his arm or something) without deceiving . That fakeout really disappointed.

Also I wonder if the anime stops at the same point or continues, if continues Ill instantly go to watch it.
Was this comment useful?  Yes

The Manga is incredibly addicting and hasn’t stumbled over itself yet. It does an amazing job of setting the mood and can be such a deceptively light-hearted romp only to come crashing down to earth with the true problems with caring for a decaying corpse with the strength to snap you like a kit-kat bar and at times, strange appetites that might put you or another loved one on the menu. Intriguing and building toward a climax I can’t wait to read.

Enjoyable light hearted rom-com
by Uthred
June 19th, 2012, 12:29am
Rating: N/A
It's an enjoyable, if often predictable romantic comedy. Nothing earth shattering but an enjoyable read nonetheless. To be honest I have to question the reading comprehension of those complaining that it somehow "changed", from the very first issue there was a heavy strand of comedy flowing through it, up to an including breaking the fourth wall.
Was this comment useful?  Yes

Boring romantic comedy
by imercenary
April 21st, 2012, 2:41pm
Rating: 4.0  / 10.0
The story starts off great. Rich daughter from abusive family dies and is resurrected via a zombie formula created by boy. Boy and girl then explore the effects and origins of said zombie formula and discover a much larger and deeper world around zombies. Sounds awesome right? Should be lots of action and mystery with an intro like that!

Except the plot completely and utterly gets derailed in favor for cheap ecchi side stories and typical shounen school problems. When the story DOES go back to the main plot, the story does a great job of teasing things, before reminding us that NOTHING in this story is taken seriously such as counteracting a zombie berserk state through... love.

If the girl wasn't a zombie, this would be nothing more than a weak romantic comedy. The cast of characters are heavily tied to the plot but consequently feel out of place in the lighter parts of the story.

I Want to Thank the Guy in the Previous Page
by Seijurou
December 12th, 2011, 12:08am
Rating: N/A
I want to say thanks to the one I just pushed out of the page that said 'always always always,' complaining about the manga containing a love triangle. Focusing on a dead girl disgusts me, but now I am definitely reading this one, 'cause I love shit like love triangles (ef is FTW). Plus, the artist is pretty good at drawing.

Great Romantic Comedy
by Anabiotic_Pineapple
November 30th, 2011, 11:36am
Rating: 9.0  / 10.0
I'm a big fan of everything Hattori Mitsuru has ever made, and I personally believe this is his best work yet. Sankarea manages a delicate balance of grimness and lightheartedness that is fairly rare in most series. There is a lot more I could probably say about what makes this manga a great read, but it's hard to put into words for some reason.

Just as you start to think that things are getting to sickly sweet, something tragic happens. Or you'll be laughing one moment and then a bombshell gets dropped. The pacing is excellent and the characters are interesting to read as well.

So far, personal character development has been pretty minor. For the most part, the characters seem to be the same from the start of the manga as they are now, but that doesn't bother me too much. The plot is what has been advancing nicely, and it's kind of a treat to see characters that already feel developed react in the situations presented to them.

The only let down is Rea. She's one of the titular characters, but so far it seems the only reason she's around is for the sake of the male lead. I don't dislike her character, but I'm hoping that in future developments, she's able to be less codependent on that front.
Spoiler (mouse over to view)
To be fair though, given what happens to her, it's not surprising she's the way she is.
Was this comment useful?  Yes