Login to add items to your list, keep track of your progress, and rate series!
Description
From Midnight Scans:

A teacher at Kanae's school has been fired for having an affair with a student. Then, a hot new librarian comes in… Kanae falls in love with the new librarian. However, she sees a ring on his finger...?

Latest Release(s)
c.Oneshot by Midnight Scans over 12 years ago
Search for all releases of this series 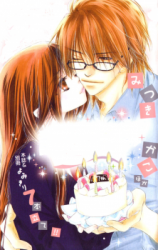 So that what it was about o_O
by Trimutius
January 13th, 2015, 4:51am
Rating: 8.7  / 10.0
I really got ready to read just another shoujo. But, damn, was I surprised! When reading last pages and after understanding what happened, I thought "So that is what ring reminded her of" LOL

Funny and interesting ending, but manga overall is not realistic, but it will surely weird out anyone.
Was this comment useful?  Yes

If you like cute mangas...
by milkgreentea
January 30th, 2014, 4:20pm
Rating: 5.7  / 10.0
Would have given this lower, but its redeeming factor was that they were at least...the last few pages will tell you what I mean. But what kind of mother would let her daughter at the tender age of sixteen...!!! But the ending really was a surprise so that part was good.
Was this comment useful?  Yes

This is soooooooo cute!!!
by Kinky-Chan
November 12th, 2012, 5:01am
Rating: 10.0  / 10.0
Hahahaha! omg. I can't believe the ending was like...THAT. XD
I was laughing at the end! I thought the story would be like any other shoujo manga but omg, it's not! It's so unexpected! This is a good oneshot! Really goooooood!
Was this comment useful?  Yes

WUT? O.o
by Dionaea
June 8th, 2012, 2:58am
Rating: N/A
Bwahahaha XD I actually cheated and read the final page first, but it didn't spoil anything. When I read the entire thing from the beginning I was like "LOL WUT?! 8D" Anyhow, just read it, you'll probably like it ^_^
Was this comment useful?  Yes

D:
by LiitoJ
December 22nd, 2011, 12:18pm
Rating: N/A
am i the only one who is completely confused at the end? i'm not sure what happened or how it happened... i mean... whaaa?! loool! i feel so stupid, i may have to reread this and try to understand it.
Was this comment useful?  Yes

WHAT A SUPRISE!
by KadraDS
December 13th, 2011, 11:35am
Rating: 10.0  / 10.0
As I was reading the story I was thinking. "Aw how adorable, another cliche student-teacher romance." So it came as a definite shock when I got near the end. I was confused at first but ended up laughing out loud. The unexpected ending was most enjoyable. As if the story wasn't cute already the ending added more to my liking of the story. Mitsuki Kako-Sensei is definitely a wonderful mangaka. This was just PERFECT.

Short & Sweet
by twelveball
August 26th, 2011, 10:06am
Rating: 7.0  / 10.0
It's a simple one-shot. I recommend it if you want to smile. It got sorta confusing towards the end, but it did not degrade the stories value. This wasn't typical shoujo- as in I actually enjoyed the female and male leads (something that happens only every so often). In other words....CUTE! Lol :-)

Hah!
by Tatania
July 14th, 2011, 9:45am
Rating: 7.0  / 10.0
I began reading it and soon realized it was just a cliché oneshot about a forbidden student/teacher romance... was I sure wrong! Such a cute story that is sure to fool everyone!

Amazing
by xbelle4everx
July 10th, 2011, 2:17am
Rating: 10.0  / 10.0
Wow, such an amazing one-shot. =D
I love how it makes you think it's one of those usual Student-Teacher relationship kind of mangas, but it's quite original (read the whole one-shot to see what I mean). It's a one of a kind and I recommend that you read it. <3
Was this comment useful?  Yes

Wow
by Mangafan54
June 17th, 2011, 9:30am
Rating: 9.0  / 10.0
I thought i was just going to be another cute teacher-student relantionship, bu then ending is just so....so unexpected i guess ^_^ it really made the whole manga more interesting. As expected of this author
Was this comment useful?  Yes