Login to add items to your list, keep track of your progress, and rate series!
Description
Fusion between two of the greatest mangas of all time. (Dragon Ball x One Piece) 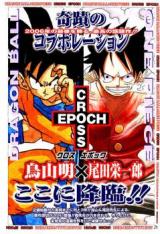 don't take it so serious ;-)
by MySwirl
July 29th, 2012, 2:10pm
Rating: N/A
Oh please, why is everyone taking it so serious? It was cute and interesting! It was not supposed to be super-cool, full of action or whatever. ^__^
They made it out of fun for the reader's fun, not much or deep thoughts are put into this, but it was plain nice. :-)
Was this comment useful?  Yes

Interesting
by westsiders2
February 11th, 2011, 8:23am
Rating: 5.0  / 10.0
if your are fun of both one piece and dragonball youi will probably like this. don't get yor hopes up about some great action or deep plot cause you will be left disapointed this is nothing more than an intresting thing to show how characters from one piece and dragonball will interact if they met.

DON'T expect much! after all it is a one shot!
Was this comment useful?  Yes

Intro to curtain
by dragonlord7012
January 10th, 2011, 6:41pm
Rating: 1.0  / 10.0
All it does is show that everyone is together, son some kinda cross universe. And that they somehow all know each other. They all either decide "to go" or seemingly already have decided and are en-root. The destination? :SPOILER: A DBZ Wish granting dragon assisted Tea party. :SPOILER:
Nothing is accomplished other than setting the stage. Nothing is explained. It's literally, just everyone is hanging out with one, or some, of the other series characters in a way that supposedly makes sense, but not really.
Was this comment useful?  Yes

one word to sum it up: bad
by Onizuka89
March 27th, 2010, 9:42am
Rating: N/A
I can't see why they even decided to make this? it's just a waste of time... closest thing this got to being interesting was Luffy saying something like "it 's so fluffy"... I have no clue why anyone would give this anything better than a 3.
Was this comment useful?  Yes

This was stupid, boring and insulting. I hate OnePiece, but even that manga is a work of art in comparision with this monstruosity.

Awesome fusion??? Uhhh no
by Daedalus
December 28th, 2006, 11:52pm
Rating: 1.0  / 10.0
One could concievably think of a million different ways to present this but in the end it just came out one way..wacky, devoid of any creativity (mild points for pairing Zolo and Picolo and Gramps and Sanji) and just not fun. Perhaps due to the cultural significance of the series in Japan this approach would have worked but coming from America and having seen event appearances with X-men and Teen Titans or the legendary Superman Spiderman crossover from the 70's this just comes off as a trite and neat little creative exercise of the creators. Hopefully one day we will get a legitimate crossover between Shonen Jump titles/ series where they r in character and honestly react to meeting one another while telling atleast an interesting story.