Login to add items to your list, keep track of your progress, and rate series!
Description
Dragon Ball follows the adventures of Goku from his childhood through adulthood as he trains in martial arts and explores the world in search of the seven mystical orbs known as the Dragon Balls, which can summon a wish-granting dragon when gathered. Along his journey, Goku makes several friends and battles a wide variety of villains, many of whom also seek the Dragon Balls for their own desires. Along the way becoming the strongest warrior in the universe. 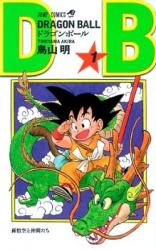 Note: You must be logged in to update information on this page.
Forum Posts Click to view the forum
Spanish television will not air "Dragon Ball" due to "Anti-descrimination" laws
about 1 year ago
When does it get serious?
over 2 years ago
The "Z" is DBZ
over 6 years ago
new short dragon ball manga
over 7 years ago
Dragon Ball: The Magic Begins
over 8 years ago

Would recommend
by MASTER GUYVER
March 30th, 2021, 11:33pm
Rating: 8.0  / 10.0
Not including super(haven't read super) , this was a nice quick read. Things get ridiculous but in a fun way. It more cartoon like then what Dragon ball is known for today.
Was this comment useful?  Yes

great but i would change some things
by pplicker
March 29th, 2021, 12:09pm
Rating: 9.0  / 10.0
the show and manga both really kickstarted me loving anime and manga and while i love the show and concept of the dragon balls i wish they would build more without relying on wishing in my opinion the only really good part about gt is how the dragon balls turned against them of course gt screwed that up too but something like that would fit nicely in dbz I don't even care about the overpowered characters i see that as creativity but i don't like how often god level fighters rely on wish orbs.
Was this comment useful?  Yes

A Good Manga, But Some Flaws
by GamerGadon
January 9th, 2020, 1:52am
Rating: N/A
I read the manga when I had seen Z and also GT, which I love. I was curious and had some idea of what happens in the manga as I had played several games which featured Kid Goku and his adventures. The manga seriously isn't for everyone, as it seems that the genre changed with age, going from Adventure-based to Action-based. Some characters have also become essentially useless, ( read : Yamcha, Krillin, Tien ) as the series progressed and the rivals became absurdly stronger than the last.
I would have preferred if Bulma didn't end up with Vegeta, as I preferred Yamcha over him. It would have set up an interesting concept for future Trunks, as he would belong to a timeline where Vegeta was his father, whereas in the timeline we read about primarily, it would have been Yamcha.
I would also have preferred if there was no Super Saiyan Two, as the One and Three seem perfect, and as the respected author also stated : Even he forgot Super Saiyan Two existed. Two is essentially a One with spikier hair and electric around the body. The vast number of Super Saiyan forms degrade the legend that surrounded it. In my opinion, there should be only two Super Saiyan forms, SSJ 1, with the golden-yellow hair and SSJ2 should have the features of SSJ3. And the Third form should have been SSJ4, which should only be available for those who have their tail
Another way the legend was degraded was that during the Buu arc, two children recieved the forms as well. Gohan getting the form was stretching it, but understandable, as he was already 11 years old, and was training with his father. Goten and Trunks, who are 4 & 5 respectively, should not have achieved the form, as it seems that when they first showed the form, it was in a comedic purpose.
Well, that is all I have to say. Over all, a 8/10 story.
Was this comment useful?  Yes

Pretty Amazing
by Arsene1412
April 21st, 2017, 10:05pm
Rating: 10.0  / 10.0
Cool story, keep focus on fights with good drawings while also being interesting to read, also the character developing is quite amazing, how they interact each other and end up helping themselves at the end, all leading to protect the earth at many times!
Also the plot is the best.
Was this comment useful?  Yes

Ah Nostalgia...
by plotrobert
April 28th, 2016, 4:03pm
Rating: 8.0  / 10.0
One of the first mangas I ever read, and one I always liked more before it became DBZ ultimately. The fights were always a little more clever and the humor a little more genuine. This is still a classic for a reason, there's never been anyone quite like Goku even though practically every shounen hero since has been a copy of him in some way. Though the series does have some flaws (like the pacing and the fact that most side characters become practically useless) I certainly recommend giving it a read.

Rose Colored Glasses
by liquidsin
February 16th, 2016, 7:52am
Rating: 7.5  / 10.0
Dragon Ball may be a classic but that doesn't mean it's a masterpiece.
Spoiler (mouse over to view)
Senzu beans (and their like), two sets of dragon balls, elders that release a person's hidden potential with a pat on their head, and a dimension where a year equals a single day cheapen this series.

classic
by kari+
November 4th, 2015, 4:51am
Rating: N/A
I rather prefer Dragon Ball then Z because characters development. Then kind push to the side in Z and hardly learn teamwork, more like attack one at a time lol but oh well. Though i guess these pages are together. Not mutch to say but a classic. Art are improve over time or redraw and release again to update art.
Was this comment useful?  Yes

Seriously, you guys?
by moonmystery
May 2nd, 2015, 3:43pm
Rating: N/A
How is this so highly rated? I tried really hard to read this, but the power-ups and mini-arcs are pretty dumb to me. The art is also terrible (the bulging muscles are seriously overboard).

I understand this is a classic, but many manga have incorporated the best of Dragon Ball since its completion and improved it tenfold, plot and art. So I don't understand how that so many people rate this manga so highly when there are now so many better stories out there.

The Archetype of ALL SHONEN MANGA
by findy37564
December 28th, 2014, 5:25am
Rating: N/A
im not exaggerate it its true every shonen manga will one way or another steal some element from dragon ball,
and this manga is already withstand the test of time for decades. even to this day remake still coming out, games, anime action figure
this manga has everything shonen series is all about and everything in it is all original to boot
Was this comment useful?  Yes