Login to add items to your list, keep track of your progress, and rate series!
Description
From Del Rey:

The young ninja Kagetora has been given a great honor - to serve a renowned family of skilled martial artists. But on arrival, he's handed a challenging assignment: teach the heir to the dynasty, the charming but clumsy Yuki, the deft moves of self-defense and combat. For a ninja like Kagetora, to fall in love with his master is a betrayal of his duty, the ultimate dishonor, and strictly forbidden. Can Kagetora help Yuki overcome her ungainly nature… or will he be overcome by his growing feelings? 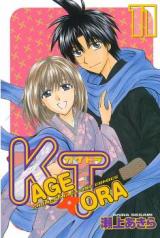 Note: You must be logged in to update information on this page.
Forum Posts Click to view the forum
reverse harem
over 9 years ago
Completely Scanlated!?
over 13 years ago

Ninja fun and romance
by ayaneninja
October 14th, 2020, 8:41pm
Rating: 9.0  / 10.0
Kagetora follows the titular character as he is requested to train the daughter of a royal family in martial arts. This leads to feelings between them developing, and other characters getting into that to make an interesting romantic dilemma. The art is stellar, the characters are fun, charming and filled with personality, and the almost episodic, lighthearted take on ninja stories is a fun and welcomed take. While the art style is undeniably a more shonen style, the story falls into more shoujo stylings, but I can see fans of both being intrigued. If you enjoyed Shinobi Life or the Recca and Yanagi dynamic in Flame of Recca, this manga will be your cup of tea.

Soooo Boring....
by Acradnxy
November 20th, 2019, 4:55am
Rating: N/A
This is the most boring manga that I've ever read. Nothing ever happened in this manga. The FeMC, Yuki is so bland and boring. Kagetora is too dumb and too chicken to do a move towards his "princess", just because he's her ninja and she's the, well, princess. It became so boring, super boring, no romance or any anything happened, ever. Only Kosuke, Kagetora's monkey is the best character in this manga btw.
Was this comment useful?  Yes

Mediocre and unoriginal
by PZcolo
March 4th, 2016, 2:45pm
Rating: 4.5  / 10.0
Dumb, naive and without a trace of originality. The romance is the main theme here and even if it isn't bar it isn't particularly good either and it re-uses a over-used formulas and the comedy hardly got a smile on my face too... if you've read several love-comedies before you won't find anything new here but a rehash of cliched characters, dialogues and events. Also, it's too long for it's own good.
I don't recommend this to anyone save those who have free time and want an easy light read to kill some time.

hurm
by TaoPaiPai
August 7th, 2011, 9:35am
Rating: N/A
there really is nothing going on in this manga
whenever there is even a chance at some form of conflict that could make it enjoyable
that thing,character,situation just get moved away/dissapears
and were back again with the same silly conversations we have read since chapter 1

Dont expect too much from this...
by torrentchan
June 8th, 2009, 6:04am
Rating: N/A
There seem to be no plot whatsoever, or at least no plot that is noteworthy. Though the art is decent, the character development, characters, genre, envirnoment and comedy is below average.

The only thing that managed to freaked me out was the romance. The romance is too strong and made me went "ewwww" which was a first since i AM a romance/comedy reader.

But this manga isnt as bad as i made it sound above, it is a good read (for when you want a light read, something to pass thing or just to experiment new genres). Just dont expect a masterpiece or something near, or even something truly decent: like Angel Densetsu (talking about the genre and theme).

I give this manga a 4, since i AM a very picky person. 1 would be a disaster, 10 being masterpiece.
Was this comment useful?  Yes

Enjoyable
by jackblack901
April 13th, 2009, 2:27pm
Rating: 8.0  / 10.0
There is nothing really new in this manga, the plot and character is original. I does not have much good points about comedy, harem, ninja action, I may blame the mangaka about because it should be done better. It just light and sweet romance.

I deserve 7 point but I add 1 for one of the nicest final chapter I have read.

Doesn't break any new ground but still enjoyable
by Geese1
March 6th, 2009, 4:16pm
Rating: 8.0  / 10.0
I'll be up front and say that there's nothing really new or original about this manga. It's plot and characters are pretty cliched, and have been done many, many times before.

That aside though, I still found it quite enjoyable. The artwork, while not the best I've seen, was still well done and the style pleasing to the eye. The plot, for all it's commonplace elements, moved along at a good pace and never left me bored or wanting. And the characters, while somewhat cliched, were still appealing and a lot of fun.

And I think that best describes this whole manga - fun. It manages to overcome it's rather standard premise and is just a nice, easy, enjoyable read.

So in the end I highly recommend this to fans of the genre. With a nice, easy-to-read style, fun characters and a good ending, it makes a fine read for anyone who enjoys romantic comedies.
Was this comment useful?  Yes

More romance than comedy
by m1sael
February 9th, 2009, 6:50pm
Rating: 6.0  / 10.0
What I liked: Well drawn, romantic all right.
What I didn't like: it is a comedy manga but it's a bit too serious. The pace of the story is veeeery slow.
Other thoughts: I'm a fan of harem series and I always wanted to read a serie where the girl is the center of attention and not the boy. Kagetora is exactly that kind of manga but after reading it I realized that things are a lot more fun when the boy is the center of attention. In short, Kagetora is weak in the fun (when compare to other harems) but it's strong in the romance. I guess girls will like it more than guys.
Was this comment useful?  Yes

Pass!
by Hanjae
October 30th, 2008, 3:08am
Rating: N/A
I picked up Volume 1 at Kinokuniya for lack of anything better to do, and the synopsis sounded cute, if not particularly unique or interesting. Given the lack of expectations, it would've been hard to disappoint me, but Kage Tora somehow managed even that. To be fair, I'll note here that this comment is written with only the first volume in mind; I've only flipped through the 2nd and 3rd volumes before giving them up. If this manga improves drastically later, then I stand corrected.

The main characters of note are Kagetora, the ninja/martial arts instructor/bodyguard, and Yuki, the successor of the Toudou family. Kagetora's supposed to be one of the senior ninja of his clan, but nearly all his exaggerated attempts to save Yuki and help her around at school have failed. Miserably. There is no character depth, because he spends the entire volume blushing at the thought of Yuki and telling himself that it is not the ninja way. Yuki is a complete airhead placed there for fanservice. I find it hard to understand how someone can be that naive and dumb; very little thought actually passed through her head.

Plot... what plot? Kagetora's supposed to coach Yuki in martial arts, but she's clumsy and a complete ditz, so that goes nowhere. The entire story thus far is dedicated to Kagetora blushing and silently berating himself for falling in love with his master, and Yuki innocently clinging onto Kagetora with the mindless adoration of a puppy.

The art is nothing to write home about either; it's fairly typical. Not particularly good, not particularly bad, though Kagetora is definitely drawn better than Yuki. Yuki's facial proportions are occasionally a little off, so readers should prepare themselves if they're really picky about the art.

All in all, I'd say - pass, pass, pass! There are many better manga out there with more interesting characters, better plot, better art, and yes - better fanservice.
Was this comment useful?  Yes