Login to add items to your list, keep track of your progress, and rate series!
Description
From Yen Press:
Maka is a weapon meister, determined to turn her partner, a living scythe named Soul Eater, into a powerful death scythe — the ultimate weapon of Death himself! Charged with the task of collecting and devouring the tainted souls of ninety-nine humans and one witch, Maka and her fellow meisters strive to master their weapons as they face off against the bizarre and dangerous minions of the underworld. But the meisters’ own personal quirks may prove a bigger obstacle than any sultry enchantress. 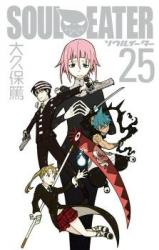 Art: - backgrounds are interesting, but characters.... Closer to the end the author at last finds his style and it becomes much better. But it's too late.

Useless etchi and alittle bit of gore: As some narrators said, It is meaningless. "We will add naked girls here for no reason. Oh, and here we gorry cut people just to show that I can do such action scenes." And again in latest chapters there are no even pantsu-shots, and no one is killed brutally. So why add it in the beginning?

Story and mangaworld: It feels just empty. The world is empty. They go from place to place, that aren't connected to each other. How do they get there? Where is it? Why are you even doing this?
Characters' background is on the surface. But there is nothing down there. All information we have is given in the beginning. Nothing new and "changing-everything" appears later.
Characters made just for MC growth... You have a brother? No one cares! We won't even see him in the story. We don't even know whether you have parents....
The relationship between characters are vague. They are great friends!(Why?) They want to help Chrona! (Why?) Sensei is like a father! (Why? You didn't even know that he died.) Their motivation is too obscure.
Adults who use children as justice-fighters killing people all the time. And the next moment they really need their help they remember that they are children... And nevertheless send them to do all the work.
Great warriors are useless.
World background is delivered too late and too little.

Tooooo much to be frustrated about....

Enen no shouboutai tried to patch story and world holes. But it just tried to justify some stupidity of design and ideas. It solved some problems. But didn't change most of drawbacks.
Was this comment useful?  Yes

Too much fan service, ruins the story.
by MASTER GUYVER
January 13th, 2022, 12:27am
Rating: 4.0  / 10.0
I'm surprised this wasn't labeled an ecchi. Young men and women (as in children) shouldn't be exposed to this sort of thing, it shouldn't be called a shounen. The anime toned down a lot of the pervertedness. There are too many mature themes brushed off for laughs, like rape, abuse, suicidal tendencies and invasion of privacy. It has good world build and atmosphere but it all comes tumbling down with perversion. Every character turns out to be a pervert in some way shape or form.
Would I read this again, heck no. Not because of the plot but because this manga found some way to feel gross and off putting. Literally in the first chapter and four chapters after and every chapter now and then Straight up fan service male and female. I liked the anime so I thought there would be no problems here but nope.

Suggestive:
Slapstick
Portrays growing friendship between the male and female mains (Maka and Soul, there usually aren't friendships explored by those of the opposite sex)

Cons:
Misleading
Too sexual for a shounen
Parts of the story can get really ridiculous
Sometimes edgy (not in a good way)
Unnecessary Dialogue
Constant power ups (unnecessary ones)
Has Characters the plot could have ran smoothly without, including villians
A little racist (debatable)
So about the racism bit:
Spoiler (mouse over to view)
In a chapter that takes place at a party and Medusa gets caught you'll see a black man with his lips drawn in a not so pleasant way. In another chapter Maka compares her zombie teacher (who is hinted to possibly be African)to a Gorilla when talking to Crona. It could be cause of his build but I'm not so sure
Now whether or not this is intentional I wouldn't be too sure since most of the black characters are portrayed in a good light and I don't know exactly what research the author found to use but those were things I spotted.


It would have gotten a 7/10 if it weren't for all the nit pics/ little problems I found.
The story isn't all too impressive plot wise but the story arcs themselves had more meaning, making the most "terrifying" villain of the story a bit underwhelming and rushed because of this. We are not given a real reason to care about them except them being a hindrance.

Not my thing
by ayaneninja
October 22nd, 2020, 12:47am
Rating: 4.0  / 10.0
On completing this manga at the behest of a friend, all I can gather from this series is that her and I don't share the same tastes. The art is decent, but nothing super appealing, and the plot is stereotypical and almost feels lifted from other manga at times, straddling the line of passable. While those are valid reasons to find something uninspired, what really pushes this manga into its 4/10 rating is the characters. They are almost all extremely obnoxious, annoying and too concerned with being "cool" to take seriously. Couple that with when there is a serious action scene or moment that has you somewhat interested, one of them will make a lame joke or crazy face and totally kill the mood of the action, making it move at a snails pace to accommodate all the phoned in, lousy attempts at comedy.

If you are looking for a manga with a similar concept, but executed with a sense of charm and allurement (and fewer uninspired characters and lame jokes), I would recommend you read Shaman King and pass this one up.

Perfect
by Chayto
August 9th, 2013, 8:17pm
Rating: 10.0  / 10.0
Perfect series indeed. The artwork is superb, It certainly does not loose quality when intense fights are taking place. Character development can be seen since chapter 01, and most important of all (in my opinion) is that every arc is important and develops every character and their relationship with each other . Certainly a must read.
Thanks to the author/artist and ofcourse, every group/person that made this possible.
Was this comment useful?  Yes

Keeps dragging itself down
by residentgrigo
April 13th, 2013, 10:12am
Rating: 7.0  / 10.0
I am with the reviews below me. It started out relatively well for a shonen action manga and became more interesting and unique as it went along but the last two yeas at least have been just tedious and pointless. No more plot or characterization just regurgitation and standstill. Hope it gets good again.
And the spinoff is sadly really bad.
Update: And now the series is dead and the ending is the typical unconclusive shonen mess. What a letdown but i still like it enough overall.

Soul mate
by FMACodeBleachMan
February 23rd, 2013, 11:03pm
Rating: N/A
I absolutely love this manga! I'm not one to get hooked into fighting themed mangas, but I was hooked with this one. I find it strange how the partner of a Meistersinger can take a human and weapon form. I liked seeing the partner of a meister in weapon form, and then seeing being able to see their human selves while they are still in weapon form as they communicate with their meister. I think I mainly love the relationship between meister and weapon; both are willing to risk their life for the other. Tht really showed with Maka and Soul. Also, the comedy in the manga was pretty good. Death the kid's obsession with symmetry is hilarious, and it adds more to his character because depending on how symmetric something is, he'll be fired up to fight, if something is asymmetrical, or he'll be staring in awe at how perfectly symmetrical something is. Ironic how he's obsessed with symmetry yet he has three white stripes on the left side of his hair and no stripes on the right. The only think I didn't like too much, was Black Star; he is rather annoying at times. Still, I definitely recommend reading this!!
Was this comment useful?  Yes

Too Fast
by asrodeia
September 1st, 2012, 12:18pm
Rating: N/A
Seems like after the Book of Eibon arc, the story is just rushed to get to the moon. It's a shame, there were quite a few interesting things that would have benefited from a few more chapters of depth.

The only thing to hope for is that more is added when the volumes come out to connect each chapter a little better....

From interesting to confusing
by blackmokona
July 25th, 2012, 9:00am
Rating: 7.0  / 10.0
So it started out great. I *love* the concept of madness, how the best meister is the one straddling the line between madness and sanity, and how I could just feel it consume the characters and the pages. And because the ridiculously exaggerated expressions portray so well the concepts, for such a simple art style, it is strangely visually powerful. I love the sequence inside Soul's mentality because it contrasts the calm of ballroom with the madness. Some characters live in their own head, one crippled with narcissism, How's that for impact?

Later it seems Ohkubo suffers the same dose of drug that leaves his characters looking positively blissed out. After Kid has been rescued, everything just gets extremely confusing, excuse me for not being able to follow long exposition that exist solely to justify the next few action scenes.
Was this comment useful?  Yes

Disappointing downturn
by Uthred
June 15th, 2012, 2:03pm
Rating: N/A
How disappointing, Soul Eater goes to shit about 2/3 of the way through, not even the internet defintion of shit (i.e. it did something I dislike) its just the overall quality drops and it feels entirely flat and tedious. Pity, suppose I'll read on anyway.
Was this comment useful?  Yes

Great Manga
by SilverLining
November 8th, 2011, 1:00pm
Rating: 10.0  / 10.0
Soul Eater is definitely one of my top mangas, and the animes is great too (until the last couple episodes). The development of external character traits is a little hectic, but most series have this problem. However, the internal character traits move at a great pace, and the author has a real understanding for the characters.While the series definitely has some story arcs that are better and more reasonable, all the arcs are good.
Problems: Due to the major theme of the manga (insanity vs. courage) not all the events make sense. Also, how much you like the manga really depends on what you think of the characters. Some may find certain characters annoying (see excalibur) while others may find these same characters funny. The ending of the anime also was...terrible.
All in all, a great story with good character development, and some intense action.
Was this comment useful?  Yes