Login to add items to your list, keep track of your progress, and rate series!
Description
From Yen Press:
Ding-dong! DEAD-dong! Class is about to begin, and you don’t want to be late on your first day of school! Join Tsugumi Harudori in the NOT class at Death Weapon Meister Academy, a school dedicated to training transforming Weapons like Tsugumi and the Meisters who will wield them. Many NOT (Normally Overcome Target) students aspire to join the elite EAT (Especially Advantaged Talent) class, but it may take Tsugumi some time to find her confidence—and a partner—at this crazy school! 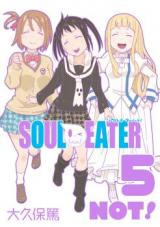 It's good
by Trimutius
July 24th, 2016, 8:33pm
Rating: 9.3  / 10.0
I think it is good as both standalone story and side story of Soul Eater. It has a somewhat interesting gag plot and a nice culmination in the end... Also shows a lot of how setting works, especially many parts which were not mentioned in Soul Eater... Was totally worth buying all 5 volumes...

I read it NOT
by residentgrigo
June 11th, 2013, 9:21am
Rating: 4.0  / 10.0
A pointless spin-off without soul, story or direction. Apparently the author wanted to jump on the K-On train and vomit out a anime. My suggestion to him is this. Cancel this manga and make the original Soul Eater better again.
The main title has been meandering for the last 2 years and needs repair.
Update: And now both series are dead. Well done and better luck next time.

Nice addition
by Curious-Insanity
December 3rd, 2011, 9:43pm
Rating: 8.0  / 10.0
I really like this new series, its cute, and is takes us back to the original comedy side of Soul Eater, the art is cute too, and as for the plot, it explains some things about Shibusen, which Soul Eater doesn't and also introduces the last Gorgon, who I've been wondering about for a while now.
Not to mention I was really excited when Akane and Clay appeared in Soul Eater after meeting them in SE Not! But I also get excited when I see characters from the main series appearing in the background or even taking a central part, like Jaqui and Kim, it was really cool to find out how they became parrtners and why Jacqui kept quite. Its funny though how the translators are confused about the Tanuki jokes...
I can't wait to see where this goes
I'd give it a 7/10 for now, but it might change when the plot kicks in ^^

Soul eater ?? not ....
by ederreu
June 11th, 2011, 11:06pm
Rating: 1.0  / 10.0
Hi atsushi ohkubo san, it seems like you've been reading too much bakuman, you may have thought that you are as talented as nizuma eiji, so you could easily pull off two series at once right ??, or maybe you were jealous of arakawa sensei for having hero tales and Fma running at the same time.

Well, the new soul eater spinoff debuted earlier this year, so far 6 chapters have been serialized, is it a good manga

. well let's take for account these important points i have noticed during this past 6 chapters.

.1 The title
As if the mangaka needed to show us more proof that he doesn't have even the slightest idea of how the english language works, he has given us this joke of a title. i now suspect that he didn't choose the name for soul eater himself , that title just makes too much sense for all other english examples he's given us.

2. The art.
Seems like the author needed to jump into the moe bandwagon, but i'm a little sad when i realize that no-one in his magazine (workers and collegues, let alone editors) told him that his style doesn't suit this kind of story. moe is supposed to be cute, atsushi ohkubo's style is not only immature (on an artistic level) it is also plain ugly, when he can't find how to work out a certain expression or pose, he simply resorts to his world-renowned technique of "stylish" or as i like to call it; lose interest, those sharp angles and out of place expressions are not the way to make up for his lack of talent, granted, this manga suffers less from this than the original soul eater, but it still is a no-no if he makes his characters looks cute, it just makes them look dumb, and unprofessional.

3. The story.
Ohhhhhhh, my God, where to start .....
let's see, when a well done spinoff is created, people generally come looking for it with the original as the precedent, the most well done spinoffs in the manga industry are probably Pluto by naoki urasawa, and saint seiya lost canvas. when a smart author makes a spinoff, he uses the concepts the fanbase is already familiar with, thus no need of extreme exposition and explanation of many fundamental concepts in the story is needed, the reader therefore has an added bonus, to focus on the twists and tricks applied to such concepts, this is a delight for them.
Soul eater not, in this case ... not, atsushi ohkubo smack us in the faces with so many unneeded explanations and mumbo jumbo that there is no real added bonus for the fans of the original soul eater, you're just better reading fanfiction and doujins than reading this. so .... if this is not proper entertainment for soul eater fans, then who could enjoy it ??, well, yuri lovers may, the series has a very important girl/girl relationship as an integral part (or as THE integral ) of the plot, so i suppose ..., wait, oh yeah, this is one of those brain dead yuri series writtnen by men (not to discriminate) who have no idea whatsoever of what women are like, on the inside or the outside. so that leaves like ... no-one, i believe no-one with a clear grasp of how important time is would enjoy this. the characters are unreal and obnoxious, the characters are paper cuts of bad stereotypes, the battles are dull and quiet frankly unneeded in this manga, and overall, it's not even a good successor of his already quality lacking source material.

A good start.
by killercool
January 17th, 2011, 8:47pm
Rating: N/A
Establishes backstory right away, so I didn't really need to know Soul Eater to get a good grip on what's what. No heavy handed insertion of main story characters, so far (just a cameo.) Looks to be a good standalone story.
Was this comment useful?  Yes