Login to add items to your list, keep track of your progress, and rate series!
Description
From Renta!

"I'm sorry I don't bear much resemblance - I love you."

Yamada Torao commits suicide after the loss of his lover and wakes up from suspended animation 250 years in the future. The android tasked with assisting him that treats him kindly and with tender care is the disappointing robot of his former lover at a "30% reduction"...? An intense future love story about a stubborn young man who learns to accept love and pursues his aspirations. 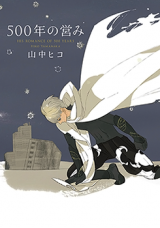 
Serialized In (magazine)
On Blue (Shodensha)

Cried
by aiish
May 1st, 2017, 3:58am
Rating: 8.5  / 10.0
I cried!!! I found this storyline weird and very unbelievable, but I was still immersed with the story and cried like a little baby!!! I honeslty didn't think much for the story but yet I cried!!! The characters and their yearning for each other just made it all the more sad. Thank god it was a happy ending, even though I cried at the end as well.

The beginning was great, but not so much the end.
by herosusan123
December 30th, 2016, 5:51pm
Rating: 6.0  / 10.0
Initially, the story was really unique and promising, but then it started to lose direction halfway through. I would still recommend it though considering that its a short read.

Spoiler (mouse over to view)
I feel like it could have ended earlier instead of having Torao go through another 200 years of sleep. I'm not quite sure why she decided to add on that extra drama at the end. Also, it would have been nice to get into the background story a bit more before all the characters were killed off haha I feel bad to give this a low rating because it started off so good, but there were just too many holes in the story and it felt a bit too shallow.
Was this comment useful?  Yes

Beautiful and deep
by gwkimmy
March 26th, 2016, 11:42pm
Rating: N/A
I'm usually not on board with human/Android romances. It feels fantastical and fake and reeks of nothing but wish fulfillment. This was different though. This manga explores what it means to be human and how love is truly a human trait. Hikaru b may be programmed to love tora-kun and the validity of his feelings may be questioned, but in the end it doesn't matter. Hikaru b becomes something of significant, sentiment value to tora and the only real thing which ties him to the human world and keeps him alive. This in itself says a lot about humanity and I enjoyed how the mangaka put this fact against the backdrop of a world where wars have obliterated most nature and humans modify themselves at a whim and robots have become a significant part of society. The extra is also exceptionally sweet, where the Android wishes for the human trait of hallucinations just to hear his beloved again.

Ugh, so beautiful, brought me to tears. Recommended.
Was this comment useful?  Yes

.. Weird
by OmNom
March 6th, 2016, 6:05pm
Rating: N/A
Am I the only one who thought that this manga has such a weird flow to it? I know this is still BL and logic isn't one of the genre's strong points, but when a story dedicates this much amount of details, time and effort into building such an elaborate sci-fi setting, then readers can't help but expect a tighter grip on the background premise, at least more than what's presented here. The plot holes along with confusing panel cuts and frankly just terrible scene-transitions did Not make this a smooth read for me. The characters also have problems of their own; particularly the main guy with his hissy fits and unreasonable tantrums that make it hard for me to voluntarily feel bad for him. Perhaps the lack of proper time spent on developing the characters themselves, which should have replaced all that piles of information about the setting which did nothing to contribute to the story, played a big part in hindering my ability to understand the motives and actions of all parties involved, even if the plot actually isn't that complicated or difficult to follow. And besides, some of the expressions drawn are rather questionable or too vague as well, so that's another point the mangaka could improve on to make her manga more comprehensible.
Was this comment useful?  Yes

Worth a Read
by greencoathook76
November 23rd, 2015, 2:39am
Rating: 8.0  / 10.0
I feel like I should have cried but I just felt sorry for the guy, its not as heavy as I'd like but it was sweet enough not to be a waste of time. Also there's androids and ~future stuff~ which automatically bumps it up. Overall a nice read

Beautiful
by Dagorkitty
November 6th, 2015, 11:13am
Rating: 10.0  / 10.0
I think this manga was absolutely beautiful. I cried a lot, this mangaka makes me feel melancholic with most of her manga. By the end tough, I cried from happiness, and that doesn't happen really often. This story was a work of art in my opinion. It touched all the right places in me, I completely recommend it, it's really worth the while.
Was this comment useful?  Yes

(I will read on)
Was this comment useful?  Yes