Login to add items to your list, keep track of your progress, and rate series!
Description
Kimito Sugata finds himself hiding in the girls locker room, unable to move or escape the situation as the girls in his school crowd in. Although he originally had no ulterior motives, he found himself panicking as he heard the girls coming in and hid in a locker. Nozomi Komine, one of the shy girls in his class finds him, but surprisingly covers for him. Perplexed but glad, Kimito goes home.

Later that night, he gets a text from Nozomi who happens to live across the way on the same floor of the complex they both live in. She blackmails him into agreeing to show each other's bodies when she ... More...
Kimito Sugata finds himself hiding in the girls locker room, unable to move or escape the situation as the girls in his school crowd in. Although he originally had no ulterior motives, he found himself panicking as he heard the girls coming in and hid in a locker. Nozomi Komine, one of the shy girls in his class finds him, but surprisingly covers for him. Perplexed but glad, Kimito goes home.

Later that night, he gets a text from Nozomi who happens to live across the way on the same floor of the complex they both live in. She blackmails him into agreeing to show each other's bodies when she texts him. Kimito has to abide by Nozomi's insane demands or risk ruining his school life so they both start their little peep show through each other's windows! Less... 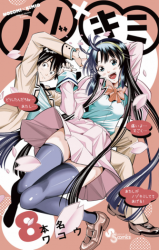 Note: You must be logged in to update information on this page.
Forum Posts Click to view the forum
Nozo x Kimi Ends on April 15
over 7 years ago
Funny enough
over 8 years ago

REALLY A MYSTERY
by cecropiamoth
August 27th, 2017, 12:39pm
Rating: 6.0  / 10.0
Why would the male main character keep running away, when a cute girl is clearly coming on to him? The answer to this mystery might be, he has to do that for there to be a plot to this manga—something to make it last beyond 3 or 4 chapters.

So if that's the answer, then the question becomes, why would the magaka think that such a degree of demur refusal on the part of a boy would WORK as a plot device?

I guess we'll never know. Maybe boys in Japan just have their sex drive totally repressed until they get an Official Girlfriend.

Whatever. One thing's sure: this strange behavior makes this mighty poor material for a western male audience, at least for this member of that group. Too bad! The drawing is realistic and great.

Prefered Nozoki
by hurafloyd
June 11th, 2016, 11:37pm
Rating: 3.0  / 10.0
Same setting, changed some details. The problem is that one of the details changed is that the male MC is a dickless moron. Lame, I loved it when my past girlfriends were that perverted so I definitely cant understand how someone can get "angry" when a girl gets you like Nozomi does unless you're definitely gay and hate girls doing that to you when you like dudes (or you're Theon Greyjoy from Game of Thrones)... *catches breath* you virgins that gave too much rating, go out and get yourselves a proper girlfriend (unless you're a girl and you've got yourself some ideas ;D).

Nozoki was perfect in that regard, they both accepted their "pervertedness" and enjoyed it (for the most part, hell I even got some ideas for my relationships XD).
Was this comment useful?  Yes

Not as good as Nozoki Ana and also the mc is stupid as fck
by moredrowsy
September 7th, 2015, 7:46pm
Rating: 6.0  / 10.0
The premise is very similar to the author's other mature work, Nozoki Ana. However, this series' ecchiness is notched down a lot (no sex or full nude) but with a lot more annoyance from the dense male mc.

Here's the thing:
Main character got blackmailed to be an exhibitionist during their private time at home. They are to open their windows and let each other see full view of their activities, such as being semi nude in underwear. Sounds good? Well, the male mc is like "I HATE THIS."

Why would the male mc hate watching a pretty girl in underwear every night or morning? What is he gay? No. He's not gay but for no real reason he just gets mad looking at the Kimio semi naked. See her bra? Mad. See her panty flash? Mad. She flirts with him? Mad. Does he like her deep down. Yes but still mad. And so, every chapter there's always 1-2 pages intro of him always getting mad at waking up in full view of semi-nude Kimio..........Just stupid.

It's also very episodic with every 4-6 chapters spending time with new minor girls. Unlike Nozoki Ana, there's no overarching story in this series.

Give it a Chance!
by AnimeSolider
June 2nd, 2014, 8:02am
Rating: 7.0  / 10.0
After finishing Nozoki Ana I found this. I read the description and was disappointed that it sounded so similar to Nozoki Ana. However, I was glad that it is not the same series at all, granted it has a very similar premise, it is still very different. I find the main heroine in this series far more likable. Even though their is still far more to go, my bottom line is that you need to GIVE IT A CHANCE!
Was this comment useful?  Yes

Lighter story for the better
by pomoli
September 15th, 2013, 3:06pm
Rating: 7.0  / 10.0
Unlike Nozoki Ana, this one is pretty light-hearted and the story is better wrapped overall.
I didn't liked the gloominess in Nozoki Ana, but this one is decent as an ecchi romance story with some exhibitionism.
Was this comment useful?  Yes

Didn't know
by bull3thole
July 30th, 2012, 6:47am
Rating: 7.5  / 10.0
When I saw this manga updated again, I thought another scanlation group was translating the 3 chapters oneshot again but it turns out that this manga has become serialized. I read the oneshot a while back and it was okay. I felt that it was rushed and like many said it is like this other work name "Nozoki Ana". I would have given the oneshot a 7/10 but now it's different since it became serialized.

The new chapters coming out is good so far. has been okay but I hate how the main character is saying like "WTF is wrong with this girl" when he could be the luckiest guy in school. He is so oppose of his lucky situation that it gets on my nerves.

Well anyways, the new chapters have been okay so far so I give this a 7.5/10 for now since it seems like things are moving a bit too fast for me so I hope the author doesn't rush this manga again.

It Had Potential
by KarnowoB
September 16th, 2011, 6:45pm
Rating: 8.0  / 10.0
Its sad that everyone just saw this as a copy of the mangakas other work. It clearly was just a promotional piece for Nozoki but honestly I feel this one has potential. The storyline wasn't a copy. It was done very similarly but so are a lock of mangas. Take almost any Shonen fantasy and what do you get, some form of magic, enemies, harder enemies, hardest enemies, etc. Same thing over and over. Yet it is still good

This wasn't given enough time to reach its full potential. Yes it would have had a very similiar setting to Nozoki but hey. Lets look at the differences, they are in highschool, they live with parents, they are not direct neighbours meaning the entire sneak around from window to window won't work. Not to mention others such as friend groups etc.

O well Nozoki is still good so we still have that to read.
Was this comment useful?  Yes

I liked it, I don't see why people gave such negative comments
by LittleKittyGroans
April 23rd, 2011, 9:59pm
Rating: 10.0  / 10.0
One of my only qualms about this manga, is that it was way too short a read! I haven't read Nozoki Ana yet, -so I don't know how much of a spin-off this really was or not, but I thought that this manga was very intresting anyway, and from at least the summary of Nozoki Ana, it seems they are different.
Pros on this manga:
1.It has some nicely drawn fan service in it (panty shots, sexy poses, naked kinda??) Nozomi, the main girl was cute and drawn well, as well as the other females.
2.The actual plot-line was good. Pretty catchy and slightly cliched, but it had pretty funny moments in it, as well as down-right sexy situations.

Cons on this manga
1. It was short, only 3 chapters with 16-18 pages for each chapter.
2. The male, and other male peers could have been drawn less in a less comical way. At least a little more attractive as well.
3. Would have liked it if Kimio, the main male of the manga wouldn't run away all the time..... You'd get what I mean if you read it.. But I was hopeing he would be a little more less of a weak character.

Con, but also Pro?
1. The ending was actually good. Abrupt, yes. And it could have been an ending to another opening for future chapters, but still good. It didn't have a ton of lose strings like other manga endings I've seen before.
Was this comment useful?  Yes

I feel like I've seen this before...
by Criminal Intent
March 6th, 2011, 9:10pm
Rating: 5.0  / 10.0
This would be rated higher for me but come on, this is an exact copy of the mangaka's other ongoing series, Nozoki ana. It's just toned down for Shonen Sunday, which takes a way a lot of the charm and wackiness of Nozoki Ana,
Was this comment useful?  Yes