Login to add items to your list, keep track of your progress, and rate series!
Description
From FairGame:

"Live with Sincerity" is Natsuki Taiyou's motto. It's the first day of high school, Taiyou was heading to school and then he meets Hinata during the way there. He fell in love at first sight and suddenly confessed to her. Her answer was yes but then she ran away without saying who she was, but it turns out that she was his classmate. Taiyou felt a destiny between them. However, on the next day, she doesn't remember who he is. Why could that be...? 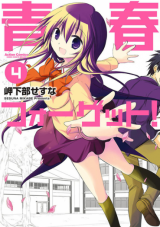 not seinen
by agartha
June 5th, 2019, 10:40pm
Rating: 3.0  / 10.0
Yeah I get it, it's a comedy. The thing for me though is likable kinda down to earth characters. This manga gives off a more juvenile romance feeling... if you can call it a romance. The plot is pretty minimal and kinda predictable. But back to the main gripe, MC is hardheaded. I don't know why mangakas keep perpetuating this hardheadedness in juvenile romances. Sure its a comedy but his level of try-hard is basically more than enough for the love interest to get a restraining order. Love interest is classic tsundere but "with a twist". Again perpetuating tropes. This manga really doesn't add anything new to the genre. You can get a few laughs out of it and kill a little time but its similar in both art and plot to any other with obstinate male lead and tsundere female lead. Not worth unless you are 12 and reading this in 2007.

TLDR;
My disappointment is immeasurable and my day is ruined

Amnesia Manga
by scorcher
July 30th, 2017, 5:47pm
Rating: 3.0  / 10.0
Nothing can really top Chihiro and Renji when it comes to Amnesia Romance. That's because unlike other anime and manga, ef: A Tale of Memories didn't focus on the romance itself but the ideal behind the romance. It is about loving a person who will change into a different person the next day. You are basically loving a person who will die every time the sun comes out. And you have to repeatedly watch as the person you love die again and again. But the story itself isn't just about the tragedy that the couple has to go through. It is about whether or not loving a person entails just loving the quality they have at the moment or loving the person as a whole. Loving someone is more than just loving the person they are now. People change overtime and the person they are now won't be the same person as they will be in the future. To love someone, one must be able to love their past, present, and future. And that is what ef: A Tale of Memories is all about.

As for Seishun Forget, the meaning behind the romance is a little bit different. It focuses more on retaining the memories because the memories are precious. Kind of like the power of love being able to overcome memory lost. But later on, they totally screw that idea and created a plot twist with their childhood memories. In my opinion, they totally killed the whole purpose of the story by throwing that plot twist. If you are going to do a plot twist, at least make the story build up for a plot twist. Otherwise, everything that you did in the beginning will become trash.

Mostly Good
by plotrobert
April 23rd, 2016, 6:30am
Rating: 8.0  / 10.0
Here we have another short series with a premise that at least hasn't been done to death yet. Though the drama can seem a bit forced at times (especially the plot twist around chapter 16) I liked it quite a lot, and at least it felt like things were moving forward constantly. Sometimes I say that I wish there was more story, but to be completely honest I think this particular story would have been better told in 15 or so chapters. In the end I still recommend this, predictable ending and all.
Was this comment useful?  Yes

Unbelievably cute!
by BobbyWibowo
June 8th, 2014, 1:55am
Rating: 10.0  / 10.0
The heroine was simply too cute on every chapters. Although she tries to be cold, her real personality is just unbelievably cute. Well, story wise, it was quite predictable. But it's not really a problem, this was pretty good for a light reading.
Was this comment useful?  Yes

nice manga
by zleonlelouch
June 2nd, 2013, 2:14am
Rating: 8.0  / 10.0
well, its nice and good, but not so overly good to give it a 10/10.... i wonder how can people just give 10 without much consent... oh well
some of the plot looks a bit ridiculous but I still find it good to be read, lovely couple with Hinata being overly embarrassed by every things that Taiyou done for her
I'm in the middle of looking for romance manga kind of like this.... I love seeing the girls being embarrassed and blushing by the male, blushing while she didn't really know why it happened, and get jealous or irritated when the male is being approached by other girls....
so I still find this manga good to be read if you want some feelings like that...
Was this comment useful?  Yes

If I could give a 100 rating I would...
by rexytheking
March 28th, 2013, 12:39am
Rating: 10.0  / 10.0
This is probably by favorite seinen manga ever. Hinata is the absolute cutest thing ever. It's like tsundere without the tsun anymore. Her proclamation for Taiyou's love was amazing and I squealed my head off. It is now pretty much a permanant homepage because her cuteness is pretty much unrivaled. The only possible thing that could have made everything better was a final scene where hinata said "I love you" or something. Super cute. So sad it ended though. The ending could have been slightly better....
Was this comment useful?  Yes

Bland
by SilentFaltrnLesrWatr
January 29th, 2013, 6:57pm
Rating: 5.0  / 10.0
I don't want to be too harsh.. but I don't know why this got such a high score. Honestly it was boring, bland, predictable, the characters were not expanded at all. In fact they barely had a personality. Once I got to chapter 10 or so I just wanted to finish it. Oh and another thing, the author, in order to make it not as cliche the author put in stupid things, stupid things that would never happen and don't even make sense. This series would have been better supernatural because at least those parts would have made more sense.. Overall It was a waste of time, but this is my opinion of course.

Totally predictable, except for the ridiculous parts
by Meins
July 4th, 2012, 5:37am
Rating: 6.0  / 10.0
Art:
Mediocre computer art as seen everywhere else. You can make very nice pictures whit programs nowadays available, but i except from a real mangaka some self-made input in the art. But without originality you can draw mangas faster. What a pity. Well, my two cents in this.

Story:
In the beginning this was somehow funny thanks to the quirky main character. After a BS explanation of why the girl is loosing memory, everything, except for the "coincidences" which happens to continuously pile on each other, becomes predictable. But the "coincidences" are taken from the "Manga 101 genuine plot elements". Of course this doesn't mean that it is bad to use genuine plot elements. But using this many make the story ... boring. So yes, there is a for example: A love rival. Monumental obstacles for the love. Some childhood oaths to other persons which demands now their fulfillment. Self-doubts/minority-complex which cause a character to give something/somebody up. And more.
A main story arc, over all 16 chapter which i have read, doesn't exist. Except for the romance between the two main characters. This is neither bad nor good, it is.
After reading chapter 16 i assume that this going to take long till the happy end. I mean get real, this is a cliché romance, this manga will definitely have a happy ending. And the explanations why the story doesn't end this time will be more and more ridicules.
Character development isn't. Well it's "just" chapter 16.
Spoiler (mouse over to view)
Please don't mix up the return of memory whit character development.

Conclusion:
Regarding this manga: been there, done that. Except for the start setting and the quirky main male character.
I stop now reading. Don't begin reading.
Was this comment useful?  Yes

I'm gonna die from overdose.
by sighing
June 18th, 2012, 4:23pm
Rating: 10.0  / 10.0
I'm gonna die from overdose of cuteness, good story and well handled plot. This is just too awesome. I still wonder just how long can such a story go on for but I feel more and more that it is not what matters. I looooooove this manga, it kills you with sweetness while hanging yourself by your neck with its simple yet efficient plot. The first 15 chapters already placed way above most of the cute romances I've read. Damn, there's no way in hell I'll let this manga go without buying all its volumes, may it be in my language or English or Japanese.

This manga just ended and all I want to do is buy the 4 volumes. A bunch of things were pretty predictible but well put together. This is one of the few manga I've read without ever getting bored.

A-FUCKING-MAZING
by menezes123
May 29th, 2012, 1:02pm
Rating: 10.0  / 10.0
word cannot describe such awesome content. I din't feel such a good feeling since i've read Mahoraba (one of the best, i must say). I felt the same all-around psychological feeling, but never making it as a blocking to the manga, romance-wise and comedy-wise (which was also well-explored) just made that show manga brilliant, hence the analogy with Mahoraba.

Simply put, it was one of the best mangas i've read this year, and i've never read so many manga in my life as i did in this period of time. DEFINITELY woth reading
Was this comment useful?  Yes