Login to add items to your list, keep track of your progress, and rate series!
Description
Utsutsu and Yume Hasegawa have been living all on their own. One day, Yume sees red butterflies and something strange happens to her body!! As the siblings are toyed with by “Pupa,” so begins their tale of heroic love... 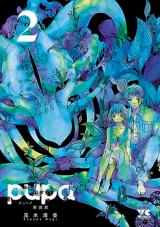 It's just not good.
by Cynistera
February 12th, 2021, 6:42am
Rating: N/A
The incest vibe only gets worse, the art is hard to understand what you're even seeing, and the story is just kind of dumb.

The wife enjoys being hit, wtf?
Was this comment useful?  Yes

Creepy but extremely interesting
by ayaneninja
October 4th, 2019, 3:52pm
Rating: 9.0  / 10.0
Pupa was a great read. I didn't get the incest vibe most people did, I just saw Utsutsu and Yume as having a strong fondness for one another, like they were close as family. The story was quite creepy, and had a lot of emotion in it. My only complaints were that there was a slight inconstancy in thefather's story line, and that some of the earlier chapters that were dialogue heavy had little to no backgrounds at first (but that was not the case as the art progresses). It's a story that really can get to you watching the story of the family, and specifically the siblings unfold. You want things to work out so bad for them, but event after event pushes the siblings further from being a family again, and then closer and then... You'll just have to read it to see how it plays out! Pupa rides the line between horror and drama, and does both really well.

OMG
by Acradnxy
March 4th, 2019, 5:35pm
Rating: N/A
Actually if it's not because for the incest stuff, it's kindda good, I mean the story per se. It's not the F each other, but it gets the strong incest vibe which makes it more disgusting than the gore stuff. This manga is not for everyone, but for those people who like body gore. I, myself, found it very disturbing and skip a lot of the manga to just read the ending. It has sad ending, I feel sorry for them, but seriously... I can't.

As I said before the concept of the story isn't that bad. It's love tragedy but I can't for the gore-y and incest stuffs.

P.S: All the lil sis does is "ONIIIIIICHANNN NO NIKKKKUUUUU!!" Which makes me wanna punch somebody. The anime is sooooo bad, manga is better.
Was this comment useful?  Yes

I first decided to start reading this because an AMV had a few short clips of the anime in it. I hate gore so I put off watching it for about 4 years, though now I'm so glad I watched it! The thing that drew me in was the siblings' deep love for each other. They had been through so much terror and darkness that you'd think they would have abandoned each other for their own safety. But they stick together and accept even the darkest parts of the other (oh gosh they are so twisted). I have never seen a greater love in the manga/anime world. Despite everything being so twisted, their love alone is so pure. It shines like a light in the darkness. Because the scene around them is so gruesome and dark, their love shines even brighter. It truly is a moving love story :,]

All that being said instead of watching the anime, READ THE MANGA* The manga is better than the anime because it goes into more depth and there is greater character development/more things explained. So if you are only going to try one, choose the manga. After about the first volume most of the intense gore disappears and the love story/plot begin moving
Was this comment useful?  Yes

Yeah, seriously, I get why there's so much negative reviews, I admit there's a lot this manga needs to really work on. But it's good points are...well...GOOD.

There definitely are incest themes here, or just too much sibling love to the point of creepiness, but it's that love that the entire story revolved around on. What a brother can do just for his sister, and vice versa. It's amazing, to think that their ways of thinking are actually messed up by our standards, but those decisions can still tug a heart string.

The gore, I eventually got used to, 'cause for me, it serves as an intensifier of the experience. Although sometimes, it can distract me to the point of not even giving a shit about what's going on since it takes all my willpower to keep from barfing all over the place. Yep, the author needs to work on that, I guess. Gore is awesome...in the perfect amounts and in perfect circumstances only.

Lastly, the art. Yeah, it's pretty generic shoujo style, but I adore how it looks sketchy and rough. It's probably only me, but I love it when the art style helps set the mood of the entire premise. Also, how it contrasts the nature of the plot - so much gore subjected to cutesy characters.


Now that I got that covered, I'll discuss some things that I didn't like:

The Plot :: I don't hate, no. It's just that it almost felt random. Like some bored god just thought of something fun to do, and what better things to cure his holy boredom than put a pair of abused siblings in the sorriest chain of events. So far, there wasn't much development on the virus that destroyed both their lives, and I really got pissed off by that.

Lack of development for potentially-important Sub-Characters :: The siblings were very well-developed, but the side-characters aren't. I know it isn't a necessity to do so, but in the manga, I think it is. This mysterious big-boobed chick from this research organization, the father (who, for some reason, really seems important) or the organization itself. In my opinion, there's too much focus on the main characters, and too little on the ones who actually are the cause of all this shit going on.


Yep, Pupa is a potentially good manga, but I've read about 10 chapters so far so I will be updating this review once it's completed.
Was this comment useful?  Yes

decent manga with good potential
by Thangpro23
January 5th, 2014, 7:19am
Rating: 8.3  / 10.0
I dont know why people rate this manga quite low , i think this is a very good manga with good potential . Pupa at first have many gore scene probably make many people turn off , and the story is kinda dark and twisted . But if it just another piece of guro manga with sick characters doing sick shit , i would drop it long time ago . The story of the pupa also have some heartwarming some time , but it also make it even more and more depressive wihich i realy like . The atmosphere of the manga is excellent , it have every thing a horror manga need : ' tension , creepy and depressing ' . I think this manga have very good potential with all the mystery surrounding the plot and the characters .

You think this is a horror manga only? Wrong way
by Cheerthedead
January 2nd, 2014, 9:37am
Rating: 8.1  / 10.0
As i had stated, horror is just one aspect of this manga. I would like to focus more about the emotion parts with the brother and the sister. The blood, the organs laid around, the screaming, the dead bodies are the background, do not pay so much attention to them (even if they have very strong impression).

Here is what i will tell you to look at, the plot, that the one thing you need to know more than anything else. Let the curiosity leads your mind, let the love of those kids moves your soul, let the shaking atmosphere suffocates your heart, you may be on a different corner and see this manga in a much different way.

Now in my personal opinion, this's fantastic, i never expect there is a manga that can meet my standard of horror and love. My idea for many years somehow makes it to the world, that's really interesting to my core. However, i feel sad, usually girls do not like horror and guys do not very into my favorite categories so the chance that there will be a doujinshi that i like is extremely slim.
Was this comment useful?  Yes

Stupidity + Gore
by sculamio
November 22nd, 2013, 4:10pm
Rating: 1.0  / 10.0
The plot makes little sense and is driven by weird coincidences. Basically, the little sister randomly turns into a monster and makes an arrangement to feed off of her brother. There are incestuous vibes from the very start, and they only intensify after every "meal". The siblings are then put into situations that allow for the most violence and gore to be shown as possible.

Art is fairly generic shojoesque stuff (the sister identifies her brother by his flowery hairclip, for goodness sake).

Would not recommend for anyone. If you really want gore/horror, try checking out I Am A Hero (a masterpiece) or Deadman Wonderland (tons of gore + fairly interesting plot). Both are infinitely better than this travesty of a manga.

gore and fucked up
by CrossRyuu
November 16th, 2013, 10:09am
Rating: 7.0  / 10.0
its not the most gruesome manga ive ever read but its certainly super gore plus the fucked up story you should rad this if your onto this kind of stuffs but dont read it just because you want to try reading it well dont even try i don think youll like it but other that the gore everything else is so-so

Keyboard, meet forehead.
by WShin
November 10th, 2013, 10:26pm
Rating: N/A
This is so headbanging frustrating it reaches a new level of awesome.

Like a trainwreck in slow-mo. Basically you have a typical shoujo heroine in the form of the little sister who just cries about everything and does nothing at all. Then you have your deceptively weak from the start shounen hero who finds some hidden power. My opinion is just to:

Spoiler (mouse over to view)
Get rid of the sister. She's being a derp, and screwing up the whole experience for me. Her brother's sacrificing the most out of everyone right now, and she needs to do something to make amends, like sacrificing herself or eating their dad or something. Seriously. And if both of them are supposed to die somewhere along the way, please kill the brother off first and then the sister.

Like other people say, the gore is the fun part. Just don't project yourself into the role of the older brother (ouch!).