Login to add items to your list, keep track of your progress, and rate series!
Description
The story follows a high-school student named Kei Nagai who is caught in a traffic accident, dies, but immediately revives and learns he is not human, but an Ajin, a mysterious creature that cannot die. Scared, he runs away from humans hunting him down but is helped by his friend, Kai, who joins him in his flight from civilization. He then becomes involved in a conflict between human and Ajin and must choose a side.

Note: Only the first volume is credited to MIURA Tsuina.
Nominated for the 7th annual Manga ... More...
The story follows a high-school student named Kei Nagai who is caught in a traffic accident, dies, but immediately revives and learns he is not human, but an Ajin, a mysterious creature that cannot die. Scared, he runs away from humans hunting him down but is helped by his friend, Kai, who joins him in his flight from civilization. He then becomes involved in a conflict between human and Ajin and must choose a side. 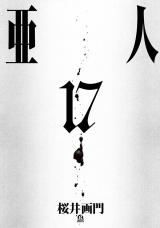 Finally finish this
by Thangpro23
April 11th, 2022, 7:11am
Rating: 9.0  / 10.0
I remember reading this when I was in university for my bachelor's, and that was almost 10 years ago. After reading the first volume, I know that I was in for a ride, and I was not disappointed. Sato is probably one of the best villains I have seen in manga. He may not be the most powerful or sympathetic, but he sure was entertaining. I feel like in the latter part of the manga, he may as well be the main character with the amount of screen time that he has. I really like Kei as the main character as he seems to be the perfect contrast to Sato. The other supporting characters are also good too, as they have their own defining personality, and motivation and have a role in the story, and not just as background filler. Overall, this is a very entertaining manga with a really good concept, good execution of that concept, and overall entertaining characters.

Damn
by BaconPizza
December 25th, 2021, 3:48pm
Rating: N/A
It's straight-up badass and big-brain, all the characters have their own stories, the protagonists and antagonists are all well-written, amazing art, I felt satisfied after reading and want moar
Was this comment useful?  Yes

An unique manga
by lacming
February 19th, 2021, 6:31am
Rating: N/A
This is the first time I've written a review for a manga and I truly think of this manga as an outstanding one among those ecchi and harem stuff(sorry because I hate all those kinds of fan-services, even something related to romance in action, psychological, and horror mangas).
I love the fact that every character is so real - I mean they are "rational" in their own way, especially the protagonist- Kei Nagai. He is not the kind of the main character we always see: "badass", always think of other's sake first, or say "I want to save the world", etc. He is a realistic one, or someone may say he is selfish. I don't have the right to impose my mindset on others, but think more deeply, if we were in his shoes, would we act differently? Who will have enough bravery to be against the government, the "villain" Sato, or the bias thinking of most people who judge Ajin as if they were monsters? If they have, then "how"? How to go against all the things? Will they just shout like crazy" I wanna change the world" or" I will never give in", then wait for a"buff" or an unexpected power coming from rage? Maybe Kei also thought so. He thought that he himself alone can't change anything.
He is a genius, a distinguished strategist, and what? He is just an individual and an individual can't do anything. Thus, when dangers come, he just wanna hide and live in peace. No one wanna die, especially a person brought up in a "rational" environment. However, throughout the timeline and events, his personality changes more or less, or we should say: he gradually opens his heart and tears the safety mask he has been wearing. It's excellent character development, and not only him but other characters have their own good character development as well. For example, Tosaki first appeared as an annoying villain but after that, we learn he had a rational reason to do so and I can't tell that I like or hate him. Sato is truly an unforgettable villain because he is a real villain. It may sound funny but how many villains like him can we find in mangas today? An intelligent, unpredictable, and maniac villain who can make us excited and afraid at the same time is not that many. Every character is real as if they were people we can run into these days.
Lastly, one trivia matter confusing me now is the "real" thought and personality of Kaito. At first, i saw the relationship between him and Kei is like the one between Hide and Kaneki. But when some thoughts of Kaito were revealed at chapter 69, I suddenly understand that he is not carefree and kind as he may seem, but ya, the manga ended, so it is such a loss not to dig more information about himself.
In general, good and appealing art, good character developments, unique protagonist, dark theme(when we consider how indifferent the attitude of people there towards all the horrible events). If you want an action manga in which people always care and think of others first, this is a bad option.

Some people are missing the point of this manga
by AsianG
March 29th, 2020, 9:13pm
Rating: 9.0  / 10.0
Some people seem to really miss the mark about this manga so I thought I would put my quick share on why this manga is amazing. Lets get one things straight first, the torture/abuse of immortal humans in this manga is a super small part that is mostly glanced over other than 1 character constantly referencing it to affect is personality. The real meat of this manga comes with the villain Sato who might be the most entertaining villain to watch ever. Ever time the author feeds us some of his backstory it becomes a joyous moment, and his overall dynamic with the main character is really fun to watch. If you are turned off by the comments about the gore side of this manga I would say to mostly ignore them. It really looks like the reviewers complaining about that side stopped at those chapters. But if you want a fantastic action manga with fantastic art and great world building, constantly talking and figuring out the rules of the powers HxH style then Ajin is the manga for you.
Was this comment useful?  Yes

Definitely enjoying it!
by rninty
August 21st, 2017, 5:26am
Rating: 9.0  / 10.0
There are a few chapters near the beginning where the main character’s personality seems out of sync with his past and future characterization, but that stops and the story is better for it.
Was this comment useful?  Yes

Suddenly Disappointing After Many Good Chapters
by cecropiamoth
July 13th, 2017, 3:26pm
Rating: N/A
This started out as a very elaborate and well-down "outlaws against a cruel society" story, with a great Terminator-type character, and lots of exciting fighting. Now, around chapter 30, it's turning into a "society against a terrible villain" story. I don't know about you, but I find it easier to to root for outlaws. I guess I'll have to drop it.
Was this comment useful?  Yes

Lol what
by That3rdGuy
December 17th, 2016, 10:27am
Rating: N/A
@jeffreymgibson What fairy tale do you live in? First of all, you have a shallow understanding of the world and the people in it. People quickly toss aside their morals for profit. You can think highly of yourself all you want, but you're the same way. These scientists see immeasurable promise by studying Ajin. If you really think there is no more human experimentation these days, you'd be mistaken. Whether it's by the government or a powerful corporation, these things happen behind closed doors.
As far as the story is concerned, the public doesn't really know about the Ajin experiments (something you'd know if you paid attention, as they mention it quite often). The citizens seem to think everything they see on it is CGI (a common theme, makes me wonder if there's any truth to it in reality) or that it's some urban legend, up until the plane crash.
Also, you mistake fear for hatred. Imagine if you watched someone you know get mangled by a vehicle just to regenerate. You'd freak out. It's the fear of the unknown that makes people act irrationally. And yes, background characters tend to be one-dimensional. Fascinating insight. Seeing as the manga revolves around Ajin, I wouldn't expect there to be many humans with much character development.
One last thing, you think this is suited for middle school kids? Are you mentally impaired? A seinen manga for children, that'd be a first. I'm sure they could wrap their heads around the adult themes, like torture or terrorism. Oh, but there's violence and gore, so you must be right lol.

In short, all of your points are based on something besides this manga, because pretty much all of them are addressed. Like the scientist who helped Kei, the fact the public doesn't know about Ajin experiments or if they actually exist for like the first 25 chapters, and the fact that there are some humans that aren't one-dimensional. I wonder if you've bothered reading more than a couple chapters.
Was this comment useful?  Yes

Hmmm...
by jeffreymgibson
May 15th, 2016, 2:11am
Rating: N/A
The one thing I don't like about this series is the numerous atrocities the government inflicts upon the ajin. The experiments conducted on them is just too much. And whats worse, no one seams to care at all. I found myself rooting for the ajin to kill all the humans.

This manga makes humans out to be plastic one dimensional characters and their only character trait is hatred for ajin. It's unlikely that the whole world would hate these guys for no reason. The fact that the scientist can commit the experiments without the slightest bit of guilt is also unreal. This story just lacks any depth.

I could see someone in middle school enjoying this manga, but thats about it.

The numerous clever plans that were carried out kind of reminds me of Death Note.

Excellent art and an exciting read with no signs of slowing down. I would be sorry if the mangaka really returns to ero manga after finishing Ajin.
Was this comment useful?  Yes

Great!
by mercio
March 7th, 2016, 4:34pm
Rating: 10.0  / 10.0
I just hope the end is good enough and not like other manga where the author dumbed down the character to make ending black and white. Good will always prevail over evil or other stupid shit like that.

Spoiler (mouse over to view)
A lot of people hate the main character but I think he's the only one that see the world for what it is.

"People Aren't Against You; They Are for Themselves"
Was this comment useful?  Yes