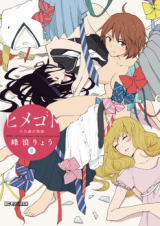 raaaaaaaape
by NerevarineVivec
September 27th, 2018, 8:26pm
Rating: N/A
This manga does some things good. It has excellent pacing and every chapter leaves the reader wanting more.

But oh man, does the author rely on rape and sexual assault to move the story along. In the first couple chapters, literally every character has sexually assaulted and attempted rape of the main character. And even later on in the story, characters being raped, character were raped, happens waaay too much.

The main romance feels way too force. So the main character has some masochistic tendencies, shown at the start. So when when the first character sexually assaults her its shown as something she wants, and even starts being attracted to the person who did it. But when the childhood friend character does it, then o shit its a big deal. And then the childhood friend characters is just thrust into the background and never thought of again until its convenient to the plot.
Was this comment useful?  Yes

Better in the beginning
by 801crazed
January 16th, 2018, 8:28am
Rating: 8.5  / 10.0
This was a lot better in the beginning but then it out stretched out a bit too much. Some of thr drama in the middle was kinda pointless. I still enjoyed this, but it should have been at least 2 volumes shorter.
Was this comment useful?  Yes

Amazing
by aroptua
September 4th, 2017, 4:12pm
Rating: N/A
I think part of the appeal were the short chapters initially.
The story ends abruptly, kind of, but it's so rewarding and each chapter ends in a cliffhanger, naturally. But these kids, man, after every single page you just want them to figure things out for themselves and have a happy life.
Spoiler (mouse over to view)
Also, one of the oddest love-triangles I have ever seen.

This was just wow.

Good
by Dr. Love
August 15th, 2017, 5:12pm
Rating: N/A
Following the lives of dysfunctional teenagers/early-twentiers coming to grips with love and sexuality has always been a weak spot for me. I really like the cast, and every one of them feels fleshed out and their complexes/insecurities thoughtfully examined. Definitely recommended
Was this comment useful?  Yes

so unique and interesting
by countingwounds
June 25th, 2017, 5:57pm
Rating: 8.0  / 10.0
full of twists and unique-ness, one of the more interesting manga series I have read in a while! Had it's downsides, but it gets you reading it until the end. The characters have a good back story and real side to them a lot of series don't explore. Very nice!
Was this comment useful?  Yes

Wow this is awesome
by Trimutius
June 6th, 2017, 5:12am
Rating: 10.0  / 10.0
It was very nice going through the manga and then even the ending was exactly what i hoped for... I definitely recommend this. Though if you don't like cross dressing or prostitution theme you have been warned, there is a bit of that right from the start...
Was this comment useful?  Yes

Train wreck with nice clothes
by CCheshire
February 8th, 2017, 10:39pm
Rating: N/A
So far I've read up to the last vol and checked out the raws so I have good idea how the story ends.

Spoiler (mouse over to view)
Nothing is resolved. The entire manga series would have had a decent ending where Yoshiki finds out about Kaito and Mikako at the hotel and says CYA. Also, she returns to being friends with Sho (WHy) at the last chapter. How do you even justify even wanting to know such a person?

It's frustrating since ever step forward there's 10 steps backwards in their relationship and I'm so tired of love triangles in manga. The best ending would be a retcon where the MCs just never meet each other at college and get on with their broken lives. It's a shame since the manga-ka had a decent idea but just never managed to make it work with the pointless loldrama scenes.


Skip it unless you like endless drama and cute outfits. Also everyone except Yoshiki has a terrible personality from beginning to end.
Was this comment useful?  Yes

I just want these kids to be alright
by transbikes
February 7th, 2017, 1:24am
Rating: 10.0  / 10.0
As I'm writing this the last volume is being translated. And. I. Am. So. Nervous !!! Ive grown so attached to these kids and I just want them to all be okay and to finally come to understand and know and love each other as I know they all can.

The characters are all very three-dimensional and they each have their own sets of unique, intense baggage. Throughout the story we get to see how they are slowly working to overcome their issues, with many steps backwards before they go forwards, etc. The characters are all fairly self-centered and become inter-dependent upon each other to reflect their own self-worth - and while this narrative can be stiffing at times, it is what makes the characters believable and compelling. Like most humans, they are inherently flawed. And while their actions are often misguided, it is with good intent. The story & writing overall feels very realistic and I know that this manga can be A LOT for some people, but I really do recommend it.

It has prevalent themes of identity exploration and each character goes through their own personal journey of trying to discover who they really are after having hidden behind a "mask" personality for so long. Gender and sexual exploration are central themes, and while I might otherwise be turned off by the amount of explicit content in this manga, it is used with purpose and is necessary for the story, honestly.

I wouldn't recommend going into this lightly, but if you're up for a terrible torrent of emotions, then get ready, cause its a wild ride.

I really hate this manga
by equalbutdifferent
October 26th, 2016, 12:14pm
Rating: 1.0  / 10.0
It invokes a lot of negative emotions. It also forgets to mention the fourth character in the manga called Sho and he is basically the character everybody picks on in the manga. The manga is reverse equality and reverse feminism. It basically supports that you shouldn't respect women or other peoples rights by showing that they will only mistreat you and take advantage of you. If your a person that is against women rights and people dressing the way they want to dress this manga will support those beliefs.

Amazing art, but the story isn't for me.
by Moys
June 26th, 2016, 9:36pm
Rating: N/A
I really like this manga's art, not even the "kinky" side ( it was still nice though ), but mostly the girls's face. What i really enjoy to see is pretty and girly faces, and this manga was full of it, so I was happy to find this manga, the story seemed to be interesting and going over modern questions about gender and identity, so why not. I started to read, characters were interesting, girls were pretty, but then it got pretty fucked up from my point of view and and became harder and harder to read. I managed to read around 40 chapters ( the art really kept me from dropping my reading ) but I couldn't anymore so I stopped and then I'm writing this half-assed review. Honestly this manga is good but just not for me, I won't say that it's too "mature", just too complicated, and I don't like that in romance mangas.

My favorite manga genre is romance but i can't stand when its too disturbing and dark like in this story, I like simple and cute ones, so if you're like me maybe this manga won't be for you. If you're looking for gorgeous art and a complicated romance story with a lot of twists, perversity, traumas and that you can stand when the romance isn't light-hearted, this might become one of your favorite mangas.
Was this comment useful?  Yes