Login to add items to your list, keep track of your progress, and rate series!
Description
During the turbulent Bakumatsu era, the Shinsengumi defend the capital city, Kyoto, and the Tokugawa Bakufu. Its vice commander, Hijikata Toshizo, is a man everyone has dubbed "the demon." The top Shinsengumi swordsman, Okita Souji, looks up to Hijikata and swears to see to the achievement of his vice-commander's dream. But deep within Okita resides a man who hates Hijikata with a passion, and that persona is about to awaken... 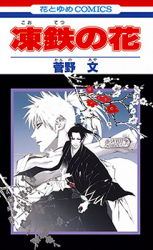 Beautifully drawn.. but
by naczyls
June 8th, 2014, 1:06am
Rating: N/A
The art is really beautiful. The plot started out as having much potential. After the first chapter, things winded down and it became a rushed plot..
Not really worth the time reading it..
Was this comment useful?  Yes

Kootetsu no Hana
by brenda307
January 6th, 2013, 7:34pm
Rating: 9.0  / 10.0
I actually found Kootetsu no Hana to be very interesting since I don't really know anything about the Shogunate security force during the Edo period. Also the manga has beautiful art and is an extremely short read with only three chapters to it.
Was this comment useful?  Yes

shoujo
by jjchan
June 27th, 2011, 10:12pm
Rating: N/A
haha to be honest i only looked at it for the art, since the cover was pretty. unfortunately there's only one chapter scanlated, so i didn't get to enjoy it much. ): i'd advise giving this a pass unless you can read the whole thing.

anyway, a note: i believe "shoujo" refers to manga published for girls, regardless of content--this was in hana to yume? then IMO it's most definitely shoujo, the surest marker for distinguishing series is the publisher. there are a plenty of other atypical shoujo out there but they're drowned in the legion of fluffy cliched stories.

and it's only now that the boundaries are blurring? since gender-neutral magazines are starting to appear.
Was this comment useful?  Yes

Mini Review of Sorts
by HCB
February 15th, 2009, 2:34am
Rating: 6.5  / 10.0
Set in ancient times where swordsmen roam the lands for their own beliefs and loyalties amidst political undertones. Sounds familiar? Doesn't it remind you of Rurouni Kenshin a.k.a. Samurai X? This story also takes place during the Bakumatsu.

From my understanding, the genre of a manga is generally established by whatever magazines they were first published in. I do realize that this is published by Hana to Yume (well known for their shoujo titles), but aside from the pretty male faces, this manga certainly isn't shoujo. Read it, and you may just agree with me it's more fitting categorized as shounen manga.

I suspect the artist's previous titles have always been clear cut shoujo, and hence, this one got picked up by Hana to Yume too.

As for Farfalla's comment of "a bit shounen-ai", hmm... Let's just say that whatever bits of shounen ai anyone can possibly wring from this can be compared to spotting hints of shounen ai between Naruto and Sasuke, i.e., you can certainly interpret certain scenes that way, but I sure don't see it here even if I'd like to. :-/

The art is pleasing on the whole, although it could do with more work on the combat scenes. (Or maybe elaboration on that is what it takes to elevate this properly to shounen manga status?) Eye candy nevertheless, despite being a somewhat forgettable volume.