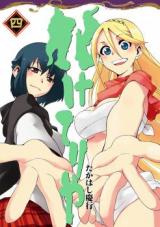 What to say...
by Seregosa
August 6th, 2017, 5:04pm
Rating: 6.0  / 10.0
Well... Yeah. It's an acceptable manga, it's pretty interesting, it's a little bit above average but not much so I'll give it a 6/10(5/10 is average). The pacing is a bit out there, it goes from start to end too quickly. I enjoyed reading it, but there was also a lot of things I didn't quite like. The worst part of it all was probably the ending. I hate endings with partings, loss of power, death or anything sad, the ending of a story should always be very positive is something I believe in. I especially hate stories like those where someone goes to another world, becomes all powerful, gets lots of lifelong and then just abandons it all and returns back to earth where they'll return to just being a normal person, losing their power and friends, no, I don't care about if they had family and friends back on earth, unless it's possible to go back and forth between worlds and bring people with you, it's just not worth it after all you gained compared to what you had on earth. In the first place, the reader never gets to know the backstory and circumstances of the hero back on earth, so it just gives negative feelings to abandon all that we did know of for something we don't give a fck about.

Well, I got out of track, but the ending in this one was similarly horrible.
Spoiler (mouse over to view)
Every youkai he got to know just faded away and he can't see them anymore? they fulfilled their purpose and we get one of the crappiest endings ever complete with a "we will always be watching over you?" kind of thing?
He'll never see them again? Don't screw with me, endings like that suck more than when someone returns to being an average person from being ridiculously overpowered after suffering through ridiculous ordeals

Worth reading because it's short, if it was longer I would've gotten even more attached to the characters and would probably have sent the author some authentic swedish surströmming by mail, set to explode on arrival as a thank you for that ending.

goddang fast
by whitespade
July 24th, 2014, 2:58pm
Rating: 7.1  / 10.0
this is one of the fastest and most compact manga i had ever read. the beginning and the ending is so fast, that i cannot process most of the happenings, and the 'feel' is also heavily compromised i cannot sympathised with any of the characters. which is weird because the middle part felt kinda dragging and 'filler-ish' as lots of things that happens there is not very important.

i really wish the mangaka put more thought in the pacing, as the characters, the plot and the twist are actually pretty good, but the execution is just sub-par. its a pretty short shounen considering, so you wont waste much if you read this but dont expect much if you do read.
Was this comment useful?  Yes

Should you read it
by Silvergoku
June 24th, 2014, 8:28pm
Rating: 7.7  / 10.0
The manga has an interesting plot and it starts off not in the best ways however it does get better towards the end. The plot develops and we learn what is so special about Naoya Kamitani. My only warning is this is not for romance fans its more a supernatural manga with a good story. The ending is alright, but not the way I would have wanted it to end but its an acceptable ending.

Intro wasn't that bad...?
by Padawan
July 12th, 2013, 11:31pm
Rating: 7.0  / 10.0
Despite the comments about the intro being lacking, I thought it wasn't that bad....
It wasn't so terribly nonsensical or weird, but it was a bit rough in its execution. The main character may seemed to have acted strangely (some say stupidly) in such dire situations (in the 'Orientation' intro chapters), but I thought it was understandable if you think about it. But well that's just my opinion.

In addition to the 'youkai' theme (similar to Nurarihyon no Mago, as someone mentioned below), the story seems to also focus on themes of 'fighting against those who oppress', and 'don't judge a book by it's cover'. The main character has a sad past, which is why he's so set on improving himself, change his luck, and rise over those who oppress. It's easy to misunderstand the youkai at first, but they are ultimately a mischievous bunch, and you just gotta read on to know what their real intentions were.

I gave it a 7 because although I find it to be alright, this type of manga just isn't exactly what I was looking for.

Also, can someone change the image above? It's highly misleading and not an accurate depiction of this manga imo (well, unless that's the actual manga cover...). The description is also misleading and contains spoilers (well, sort of).

All in all, I think this manga is misunderstood haha~

A textbook example of a terrible start
by thischinksays
December 30th, 2012, 4:21am
Rating: 7.0  / 10.0
Don't judge this manga from the terrible premise. The first two or three chapters are not only nearly nonsensical, they're also sloppy and downright insulting to the reader's intelligence. The MC is completely unrealistic at the start but luckily, things turn around. Baketeriya is a good example of the saying "It can only get better from here".

Baketeriya has teething problems but it quickly gets itself on the right track and starts telling a good story. Baketeriya is similar to Nurarihyon no Mago in that they both involve an army of youkai. There are a couple huge differences which make Baketeriya a completely different experience. First off, Bake is written to get your emotions to flare up. It almost feels like a rage manga. Luckily, it doesn't go too far into the rage territory. Next, Bake went the slow romance with comedy route with drama arcs. The youkai army feel more like side characters rather than the focus.

This isn't much of a seinen but then again, there aren't many chapters out right now.

Read this if you're looking for something a bit silly that will also get you a bit fired up.

Of Course Not
by Castellan
October 5th, 2012, 4:05pm
Rating: 10.0  / 10.0
Of course the description isn't accurate. When I wrote it it was like chapter 1 and we decided to go against spoiling the story. After chapter 7 comes out, the overall plot will have hit its stride and then will be the time to update the description.

Ch7 is out and the description is updated
The category we decided on, "slice of afterlife" is perfectly appropriate. Plenty of manga staples and plenty of originality built upon those staples.

The story starts off oddly enough. Idiotic, hard working, apparently badass kid gets into an ultra-prestigious school thinking he got in through sheer smarts. But nope, he was accepted to be a literal sacrifice to the youkai confined there. Bitter? Yup! Learned his lesson? Nope!

The story then spins off into typical manga hijinks with girls fawning over him, comedic friends egging him on and non-stop comedy antics. Still think the description is accurate?
Was this comment useful?  Yes