An assassin is retiring after he finishes dodging bullets from his current assignment, all while fantasizing about his future leisurely life, when a strange woman throws a little boy down to him and begs him to, "Save this child!" 14 years later, instead of managing a fancy art gallery he's doing manual labor and raising an increasingly distant teenage boy but he's happy to provide a happy home for his new son until he realizes why Ryuunosuke has been acting so strangely....

An assassin is retiring after he finishes dodging bullets from his current assignment, all while fantasizing about his future leisurely life, when a strange woman throws a little boy down to him and begs him to, "Save this child!" 14 years later, instead of managing a fancy art gallery he's doing manual labor and raising an increasingly distant teenage boy but he's happy to provide a happy home for his new son until he realizes why Ryuunosuke has been acting so strangely.... 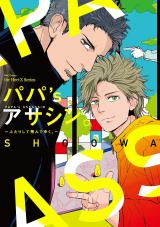 In vol 1 and 2, their father-son relationship is so damn sweet. I thought in later chapters the son will find someone else that is more important than his dad, but then I found some chapters of vol 3 in a foreign language... yeah, I'm not into incest (yes yes he adopted a son out of his own will, but this is still incest to me) so I'll pretend volume 3 doesn't exist.

I really hope the mangaka is still creating BL manga because I like their works a lot!!
Was this comment useful?  Yes

I love this so much???
by zakiue
September 10th, 2022, 5:09pm
Rating: 10.0  / 10.0
If you're going to complain about this being a father-son romance, just... don't read it. But it's so much more interesting than just that one element! There's plot! And the art is bangin. And the characters are multidimensional. And also man, I get it, ur dad IS hot
Was this comment useful?  Yes

So good
by varianthart
July 10th, 2017, 10:58pm
Rating: 9.0  / 10.0
I'm so confused as to how someone could not enjoy this. I loathe incest(or incest-like) stories for the most part, but this is gold. The characters are so well fleshed out. They're truly whole beings and not cliche at all. I love that Shoowa neither neuters nor overly fetishizes her characters, and that they are allowed actual sex lives, complex thoughts, and multiple partners without it being drama. her humor is perfect for me as well. There's no way I could write this off just because of the incest-ish vibe, and to be honest, we don't even know yet if it's going there beyond what has already happened(nothing).

The story itself is interesting. She hasn't just thrown two men together and had them fall in to bed. This is two volumes of compelling story with NO sexual relationship between the main characters. That is a good thing, as far as I'm concerned.

A Horrendous Joke (~Ch.10)
by chocolatecroissant
June 17th, 2017, 2:56am
Rating: 2.0  / 10.0
I've fond memories of Shoowa, but this mess? No thanks. Incest (or, rather, the titillation of) is not uncommon in the Yaoi/BL genre and it is usually so ridiculously done that the plot matters little. However, this story tries to play off the incest tag by drawing attention to the fact that they are not blood related yet adding in every way which the older man *is* a dad. Then they throw in a 'serious' crime backstory. Uh. You lost me. There are uncomfortable facts throughout the story and the presentation isn't nice when attempting to mix in other nationalities. Props on the pretty good sex life by the son in the beginning, though.
Was this comment useful?  Yes

Loving It
by sarin68
September 20th, 2016, 2:55pm
Rating: 9.0  / 10.0
I'm really hooked on this kind of art style at the moment and have to say I'm very happy with how comical some panels can be only to be followed by an incredibly serious panel like in the latest chapter. The incest thing is mildly creepy but the plot with the French guys searching for Ryuu is awesome and I want spy-dad to go full badass. Too bad updates are slow...
Was this comment useful?  Yes

not a one volume manga
by lovelylynx
June 16th, 2014, 11:27am
Rating: 9.3  / 10.0
The over all story is good. Wasn't too sure how it would end or what would happen. Unfortunately I didn't see that it was still an ongoing series and the end of volume one leaves you at a climax.
Was this comment useful?  Yes

wOW
by khmershinobi
June 10th, 2014, 5:02am
Rating: 10.0  / 10.0
There's something about Shoowa's works that seem to hit all of my right spots, and by that, I mean the good ones. Despite her sketchy style, she somehow manages to make her scenes very erotic, which in my opinion, is a big plus. I love the adoptive son in love with his adoptive father scenario as well. Very titillating. And the fact that the son is bisexual(?) and quite experienced at that while his father has no idea of his promiscuous nature is somewhat of a VERY huge turn-on for me. I would like to think they'll get it on later, and when they finally do, it will be incredibly satisfying.

The story is quite funny, and I have to admit, it's easy to sympathize with Ryuunosuke, especially when he's in love with someone who possibly won't love, or can't love him back.

All in all, it's a great read so far, so I'd give it a go.
Was this comment useful?  Yes

@-@ ehh?
by concf
November 27th, 2013, 8:44am
Rating: N/A
Spoiler (mouse over to view)
@-@ what with the guy who looks like daniel ??? Mhh I wonder if that guy id actually daniel from the past who comes to the present for some reasons?a relative?? XD I just don't get it after all
Was this comment useful?  Yes

thrilling!
by gwkimmy
August 22nd, 2013, 10:05pm
Rating: N/A
i love this manga so much. it manages to be an exciting slice of life manga while being provocative and sexy in each chapter. i can't wait until ryuu and daniel's past comes to light (and maybe even some action?! daniel used to work in the underground, after all).

i love you shoowa-sensei! everything you make is magic <3
Was this comment useful?  Yes

Initial thoughts
by MirayAllen
April 1st, 2013, 8:44am
Rating: 8.5  / 10.0
I was so terribly disappointed after Iberiko Buta to Koi to Tsubaki I could hardly stand it. So I went and re-read everything I have from Shoowa's. And then I found this and now I'm hooked and aching for more.

Personally, I'm not a big fan of incest unless it involves half-brothers or cousins, which I can pretty much deal with. But father/son is absolutely grotesque to me. I almost didn't read this because of that -- I mean, the sexual tension between the two is undeniable (esp on Ryuu's part) but the father clearly feels like "the" father. However, because their real relationship is made clear from the very beginning, I could easily chew around that and keep my mind on the prize, repeating to myself that this is yaoi after all, ah-ah.

That being said - I hope I haven't spoiled anything, I don't think so -, this is truly enjoyable. The pace of it, like usual of Shoowa's, is appropriate, the art-style is back to what I craved for, the storytelling, the beautiful, pitch-perfect-captured moments, the twists... I'm really loving it <3
Was this comment useful?  Yes