Login to add items to your list, keep track of your progress, and rate series!
Description
Keita Suminoe has two older (not blood-related) twin step-sisters who love him in a lustful way and have no problems expressing it. They even like to compete about it; much to the laughter of his friends (which he usually endures without problems). One day they come to his school to give him his lunch, resulting in him getting angry due to the atmosphere. To counteract his anger, they confess their tender feelings for him in front of everyone and leave. Feeling sorry he chases after them and says that he'll study hard in order to get in the same high school as them. 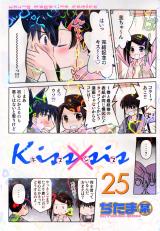 Note: You must be logged in to update information on this page.
Forum Posts Click to view the forum
Kiss x Sis Manga Just Has Two Chapters Remaining
9 months ago
Who do you want Keita to choose????
over 2 years ago
KissxSis could be cancelled
over 6 years ago
Ch 64
over 9 years ago
One of best ongoing romances in recent chapters (spoilers)
over 10 years ago

Drastic change in pace, there is a clear main herione
by tameflame
June 11th, 2015, 4:15am
Rating: 8.0  / 10.0
For the first 60 chapters the author gave each girl equal attention, but after that its clear who our MC gets with, this herione received so much attention that she absolutely outshines every rival. The author wrote himself into a corner now.
Was this comment useful?  Yes

More like Kiss x Teacher, amirite?
by AquarianDemocrat
December 29th, 2013, 5:34am
Rating: N/A
Ok, I don't blame this for being simplistic or borderline-h. I really don't. I do blame this for heroine-swapping 60 chapters into the story.

Simple is OK. Nonsensical is not. What a joke.

Hentai-without-sex is point on
by residentgrigo
March 9th, 2013, 6:42am
Rating: 1.0  / 10.0
This series a joke as it manages to fail on every level as both a storytelling device and as a romantic comedy. It also fails to give you the good hardcore porn will give you because it lacks "real" sex. Just fetish trash and highly creepy teasing but what else should I expect from a man who started his "career" with piss swapping lolis and futanari rape? Stick to Koi Kaze (8/10) if you want to read about incest and read the reviewed Ike! Inachuu Takkyuubu (7,5/10) if you want to read an amoral sex comedy.

It is original in its own way compared to other harem series though >.>

I usually don't give out a rating till I'm done but had
by Trey21
January 3rd, 2012, 9:38pm
Rating: 8.0  / 10.0
to get this one out of my system pretty good unique so far it has it's cliche parts but it's what you the author does with them that make it interesting like characters but I'm routing for the Teach though
Was this comment useful?  Yes

Good Ecchi
by McCasper
November 13th, 2011, 3:21am
Rating: 6.0  / 10.0
If you're looking for ecchi goodness and you don't particularly care about step-incest, this is the manga for you. compared to other harems, the girls in this one are refreshingly open about their feelings. The protagonists also gradually warms up but if you ask me, it was more entertaining in the beginning when he resisted more. Good ecchi.
Was this comment useful?  Yes

Spoiler (highlight to view)
why should he be paired with only one. to love ru got canned and had a true harem end. but she also made a damn good point, he would be the ruler of the universe and to hell with earths laws, you rule the universe, you make the law, lets all be together. now this whole manga is based on a "taboo" if you call step siblings a taboo, so why not break some more. i mean in the bit i have read of it, the two sisters seam to be a hell of alot close than sisters should be, and almost all the conflict starts with them not wanting him to be with he other instead of her. in all honest i think that him deciding that that law is retarded would be the best ending for this manga. again im not to far into it so i may be wrong.
Was this comment useful?  Yes

One of the ecchi greats, must read
by dufus397
July 13th, 2010, 10:33am
Rating: 9.6  / 10.0
After reading up to Chapter 38(the most recent chapter released when this was written) I can safely say that KissXSis is my favorite ecchi manga of all time. Why is it so good? For starters, the main character, Keita, isn't searching for an unobtainable girl that eventually falls for him. His twin, non blood-related step sisters, Ako and Riko, are the ones in love with him, and they openly show it(even infront of the parents, which fully approve and support it).

The two sisters are what make the manga so popular. They each want to get Keita, they each kiss him ALOT and because of that there's plenty of conflict between the two. The funny part is how each sister tries to isolate Keita and herself, and what they have planned.

Another thing that should be noted is that this manga loves to poke fun at relationship situations looked down upon by society, such as Student-Teacher relationships.

At this point
Spoiler (highlight to view)
By chapter 8 or so(don't remember which exactly) Keita has a flashback of when he was young and how he wanted to marry both his sisters. His father replies by saying that it's illegal, which saddens the young Keita. In later chapters, he openly admits that he loves them both, which makes it clear that Keita will have to make a decision one day: Who will he choose? The sweet, closet-pervert Ako? Or the tough, honest Riko?

It's because of the decision, and how they both are given the same amount of focus, that I really hope it doesn't have a Harem/improper ending. to-LOVE-ru, a series I fell in love with, had the same problem with the ending. Keita needs to choose one of his two sisters, and we, the readers, should get a foreshadowing when the manga nears its end, about who Keita will choose. His sisters love him too much, and he loves them too much, for Keita to not pick any.


In short, excellent read, every chapter forces you to read the next!