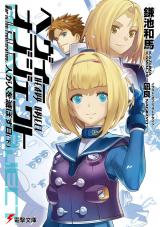 can be a bit repetitive
by SAimNE
March 16th, 2014, 2:34am
Rating: 9.0  / 10.0
That's really my only complaint here. the characters are pretty fun, the situations are disastrous, and there is tons of both action and comedy. Unfortunately there is no plot progressions aside from quenser forming loose allies with so many important parts of world powers and mercenary groups that he could probably take over the world if even half decided to stand by him

i wish they would develop the characters, but the in depth weapon, power, and economical analysis's of the setting combined with the likable characters is enough to make this an entertaining read. cant wait for volume 8
Was this comment useful?  Yes

Not a masterpiece, not necessarily trash
by Kaosu
November 5th, 2012, 4:55pm
Rating: N/A
Up to Vol 3 and the only thing that seems to be continuing is the main plot. The romance is terrible, as nearly every female is a tsundere type of sorts and even then the author spends about one line per (sometimes less) chapter expanding on it.

The formula seems to be the same every chapter Hero 1, 2 go out and become a large force in winning against the enemy. At the end of the volume, all of their hard work is ignored, minimalized, and turned into some shitty gag. Everyone has a good laugh about it and it repeats itself in the next volume. Theres no real comedy in this, only characters doing stupid actions and others responding stupidly.

And there is diddly squat for character development. I'd only read this if you like action with mediocre everything else and/or you have nothing else to read.

In short, its not bad, but there isn't anything brilliant about this. Its well written, but it falls into the traps of recyclable cliches done wrong. The 'main plot' moves quickly, which can be good, but it loses out on a lot of elements due to it.
Was this comment useful?  Yes

Deus Ex Machina plot about Crippling Overspecialization.
by Yousuke
June 18th, 2012, 11:48am
Rating: 5.0  / 10.0
Heavy Object. A seemingly invincible giant mech. And by invincible it means it can withstand nuclear attacks, shoot uncountable lasers, move at the speed of sound, and is probably powered by a magical unicorn. However each and every one of those Heavy Objects comes with a fatal flaw that is completely ridiculous and unforseeable. Best of all the design flaw in question is so dire that the two protagonists can take it down without much effort or resources. And this is exactly what this novel is about..
Our two favourite heroes encounter one of these so called Heavy Objects after another and take them down by asspulling err exploiting their weaknesses. The author shines with brilliance in that regard, because each and every exploit is so farfetched and unforseeable that you'll feel silly if you so much as spent a second of thought on the story.
I'm being harsh, because no matter how much the author tries to conceal it with his logical explanations of the fatal flaw of the mech. They're Ass Pulls.

A Masterpiece.
by gundamgundam
May 9th, 2012, 10:30pm
Rating: 10.0  / 10.0
Heavy Object is the new work of the creator of the Index/Railgun franchises, and as to be expected, it's truly good. The story takes place in the future, in an era where flesh-and-blood-soldiers wars are a thing of the past. The battlefield is now controlled by monstrous machines known as "objects", which are gigantic and so indestructible that nuclear weapons are no match for them. The strength of countries are now measured as the number and strength of the object possessed, and soldiers no longer fear the battlefield since wars are fought between this terrible weapons of mass destruction.
The protagonists of this story are Quenser, a student that hopes to be an Object designer in the future and Heivia, radar analyst. The two of them are thrown into an unexpected crisis, and to survive they'll need to destroy the enemy object after theirs is annihilated. Could they, a mere flesh and blood soldiers, defeat a 50-meters-and-100,000-tons monster that cannot be defeated even with nuclear weapons? Can they, armed only with their wits, courage and a bunch of low-powered explosives and weapons which would not even scratch the paint of the monster change the way war is made forever and the first ones in the history of humanity in defeat an Object, a creation that can destroy an entire country in a matter of minutes?

This novel is way better than the manga, which was all resumed and barely adapted ONE chapter of the novel. I started reading it with mixed feelings because of this, but I'm blown away with how much better the original story is. It's no wonder it's selling so well in Japan.
One of the sad things you may have noticed is the attitude some small number of people in the Western "fandom" have against Kamachi Kazuma and have begun a campaign to defame and slander his work, in order to discourage the translators/scanlators and hurt the fans. Please, to all the translators/scanlators who may happen to read this: don't be discouraged by ignorant comments like That3rdGuy, be sure that there are always people reading your amazing work and is always grateful for all you do for us.
Again, Thank you very much for translating this and I truly can't wait to read more of this brilliant novel.
Was this comment useful?  Yes