Login to add items to your list, keep track of your progress, and rate series!
Description
The year is 2095. Magic has been tamed as another form of technology, and the practice of magic is now a rigorous discipline. Brother and sister Tatsuya and Miyuki Shiba are just about to start their first year at the renowned First Magic High School of Japan. But the school's ironclad rules mean that the brilliant Miyuki enters the prestigious Course 1, while her older brother, Tatsuya, is relegated to Course 2--and that's just the beginning of their troubles. 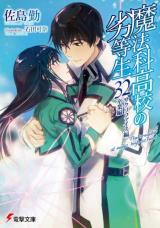 Note: You must be logged in to update information on this page.
Forum Posts Click to view the forum
Yen Press licensed
over 6 years ago
Makouka Koukou no Rettousei Gets Anime
over 8 years ago
Genre
over 9 years ago

One of the best well-written Sci-Fi I've read
by Ainzley Kaidou
June 1st, 2021, 5:03am
Rating: N/A
I actually watched the anime adaptation first then read the continuation on manga. What I like about Irregulars at magic highschool was that, it's clearly explained and how the magic works is so detailed. I suck at science so pardon my useless brain cells.haha. I admit, there are things that are hard to understand but nonetheless, this is so fireeeeee! I like how the author pairs those women whom (for me) admires Tatsuya-san in that 'way'. It's not a HAREM! If someone says it is, then they never watch nor read Mahouka Koukou No Rettousei. Also, I don't think Tatsuya's capable of loving someone. Perhaps, if he did, it is solely for Miyuki. The MC is a god. He's one of the most powerful OP I've known. He's impenetrable. I don't know how Miyuki and Tatsuya's relationship gonna work since they're siblings so I'm having mixed feelings about it. Definitely a must-read! Must watch! One of the most well-written sci-fi everrrrr!


Personally, I don't find this,in any way, BORING! Why? Simply because the plot is 100% different and intense too! Also, I like how women aren't depicted as weak but a freaking BADASS!

Depends on what you are looking for
by Arkani
January 7th, 2017, 7:30am
Rating: 8.0  / 10.0
Why would you read this novel? Only if you are in love with powerful protagonist because this here this guy is a god. If you want to read this novel for a story line I think this is not for you. If you don't like incest - bad luck - the brother complex here is too strong. If you are looking for order and structure and something unique .... maybe. The novel is written kinda strange because not every chapter offer good details. But there is definitely tension here even tho' you know the outcome.

My opinion - I liked it. I enjoy badass protagonists. I am bothered by incest thingy but whatever.

Characters: 7 - there is not much development in characters which is kinda lacking but I was never bored by them.

Story: 7 - there is no particular storyline - kinda sad about it but at the same time I understand. Imagine your daily life - could you convert it into interesting storyline? Ofc not. This has some interesting parts in it so that's why I rate it 7.

Enjoyment: 9 - as I said - I love badass protagonist who fucking owns everybody and people STILL try to underestimate him sometimes. Tatsuya is a fucking god.

Perhaps I'll reread this in the future when yen press catches up and see if there's any difference.
Was this comment useful?  Yes

Interesting novel
by clowred14
September 4th, 2015, 4:12am
Rating: N/A
The entire story is well written but somehow loses itself in details trying to predict how a society will react to "magicians", or in other words, technology which could boost the low human fighting capacity to almost god like levels. Its heavy on details, and only the anime can somehow make all the details seem interesting. Otherwise its quite a headache trying to understand all the concepts as their logic is purely fictional. Anyway, the story is over many others as we have an MP that is truly interesting. We don't see him fooling around trying to make a harem for himself, getting easily flustered and making stupid mistakes. If killing is the good option, he can resort to it. This is something that the character portrayed as a "Mary Sue" or "Gary Stu" often complain about the morality of such actions when the law can punish them with detention even if the the other party is a portrayed as a clear header killer with no intention to reform himself. Tatsuya is OP, but that's only in long range. And because he always need visual confirmation of the target it becomes easy to make him lose his standing as long as the situation forces him to be unable to use his full capacity. So... yeah, for those that comment against how OP he is .. If he was not OP, then why would he be the MP?
Was this comment useful?  Yes

well
by Azure_1802
July 4th, 2015, 10:10am
Rating: 3.0  / 10.0
I don't hate overpowered characters, I really like them to be exact. However, I cannot handle every character of this series, especially the main protagonist and his little sister. They are exactly what we call "Mary Sue" and "Gari Stu". [Spoil]The mc is described as if he is god himself although noone else except his sister (and some others) knows about that.[/Spoil]

The story is somehow boring, there are too many explainations that explained somethings understandable into some complicated things then get you all confusing then the mc appears and everything's solved
Was this comment useful?  Yes

It's a great story
by digital_cielo
December 2nd, 2014, 12:03pm
Rating: 8.0  / 10.0
Overall it's a great story but it has it's faults like not enough description of characters and too much detail to the explanations. The thing people say that Tatsuya is a bad main character is wrong though. He is a well thought out character he is technically overpowered yes but only in things he excelled in and he is under powered in everything else
Was this comment useful?  Yes

Didn't like the main character
by begi
September 4th, 2014, 3:06am
Rating: 3.0  / 10.0
The story starts nicely, but later main character gets too OP. It would have been better for him to be weaker and eventually get stronger. As someone mentioned before many girls fall for the main character, but he cares only for his little sister and will kill tens of people just because they meant harm for her. I mean he is so OP that he could have just sent them to prison. Who likes "heroes" that kill humans "that" easily, you can't possibly root for them.

I think it's written by a twelve year old.
by RockoDyne
July 5th, 2014, 7:57pm
Rating: N/A
Spoiler (mouse over to view)
First, every character is a mary sue. Every last one of them. Tatsuya, only being the sueiest of them all, should always have "he's also a ninja" appended to any description of him. Tatsuya is a super genius and secretly the master technician taurus silver, known the world over for his creations. He's also a ninja. Tatsuya is a magical super soldier with the powers of a god. He's also a ninja. Hell, they even have a kiss to unseal power trope going on. Why such a seal even exists is beyond me as all it apparently does is seal god level power down to just demigod levels.

Basically, the author's character creation process is thinking something is cool and throwing that on top of a character.

Second, every woman is beautiful, yet I have no idea what any of them actually look like. Seriously, there are no descriptions of physical characteristics past the first intro blurb. With one exception (because it's apparently relevant to her character/powers), you will never even be told what a character's hair color is. All that is left is completely nondescript descriptions of women's beauty that, had the author been sixteen, would have rankings of them based on how bangable they are. You will suffer elaborate info dumps about fashion however, which essentially regresses over a century so exposed ankles basically equates to slutdom.

Third, it's all exposition. The author is pretty much only interested in info dumping the psychobabble of a magic system. There is nothing that can go unexplained and frequently goes explained far before it's even relevant. If you don't like spoilers you might as well punch the author in the face. Frankly if you don't see what is going to happen it's because you're asleep and skipped better chucks of it. The least it could have done was have Tatsuya unveiled as a badass in a fight, but no. By the first fight there were already several instances of Miyuki saying Tatsuya is more capable than her, but more than that, you have already seen Tatsuya in ninja training, so you already know Tatsuya is a ninja. All of the fights, being the explanation filled clusterfucks that they are, are just boring with outcomes made up way before the fight even starts. The story just lives by the motto "tell, don't show."

I wish I could like this, but it's just boring. No matter what I look at, I just can't find enough that I don't see huge faults in. The characters are all perfect(ly flat), almost all the conflict comes from unaffiliated parties that don't really care about Tatsuya and co. (they just happen to be working too close to him), there are no reveals as everything has already been explained, and simply put, the author never put time into actually writing a story that is interest.
Was this comment useful?  Yes

This series' writing is painful to read
by Fundefined
February 12th, 2014, 12:53pm
Rating: 2.0  / 10.0
I'm not sure whether its the author or the translator's fault for this light novel's terrible style of writing, but this series is unreadable.While light novels in general tend to tell instead of show, Mahouka takes it to the next level with its endless amounts of dull descriptions, boring narration and painful syntax. There might be an interesting world here to be explored and the illustrations are pretty good; but as is, this is an editor's worst nightmare.

Tatsuya is a BADASS! he is basically what you call a product of Lelouch and Wolvering gemmed into one...NerdgasMMM

Overall a Great read and definite RECOMMENDATION!
Was this comment useful?  Yes