Login to add items to your list, keep track of your progress, and rate series!
Description
Anise can't believe her luck when she finds herself in the same high school as famous former child star Siva. Although the cool and handsome Siva seems unapproachable, Anise manages to become his friend. But her happiness turns to surprise when she discovers Siva's secret: for years, he's been switching identities with his twin brother, Cipher!

Latest Release(s)
v.1 c.1 by BubbleMilkGreenTea Scans over 7 years ago
Search for all releases of this series 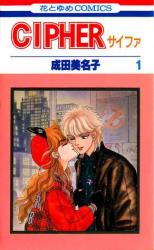 Note: You must be logged in to update information on this page.
Forum Posts Click to view the forum
Volume number?
over 11 years ago
Cipher vol4-12??
over 12 years ago

I give it a good score mainly because of the female lead.
Was this comment useful?  Yes

Reading this in 2015
by Piyochan
June 11th, 2015, 9:30pm
Rating: N/A
Personally, I really liked this manga! AND I think the art's gorgeous even though it's an older style. The characters undergo a lot of growth throughout. There were times I didn't get what the twins were thinking but I actually liked that too. Maybe that's weird but to me it makes them more realistic because it's like you're trying to understand a real person.

Yeah the romance is less prominent later so I can understand why people were disappointed (it's a shoujo after all). I didn't really notice though because the manga brought up other types of love, such as love for your family, friends, and for yourself.

Now I have to read the spin off series

A life story
by poppyevil
November 3rd, 2012, 11:48am
Rating: 9.0  / 10.0
Some people complain about how the story kind of fades its romance towards the end, but i think it's reasonable for the mangaka to do so, because Cipher isn't a story to just satisfy a hunger of romance with full of unrealistic drama, but a story with a sense of actual life in it, and in actual life, nothing simply goes as you expect it to, people don't just stay with each other for the whole time in a closed world, or make up after a argument and happy ending. Sometime there will be a new person come into your life, bring you a new air and your point of view will be shifted. That's how we grow up, and how we change. If Cipher and Siva continue to stay together, they would never realize what they are missing and thus can't never be complicatedly contended with themselves..

It's more of a josei towards the end than just a shojo, because just like norman human, characters also need to grow up and therefore grow up, as the manga process. So deal with it people.

Personally i love the manga to death, i love the art, the atmosphere and the 80s-ness of it.

Damn this manga
by MaZzAx
May 25th, 2011, 3:48am
Rating: 5.0  / 10.0
Spoiler (mouse over to view)
I have put it on my complete list but only because I'm finished with it! What a waste of time.
It started off really good and I was getting quite into it although I was confused by the twins most of the time. But then ---spoiler--- Siva gets himself a love interest and a chapter or so later she dies. From this point it started to make me cross. First Cipher leaves Anise because he thinks it's his fault - ridiculous, then it starts to feel like a manga that has no particular main character and nah it lost me completely.
I guess it probably would have got better but a manga is only good if it holds your attention all the way through.
Not very impressed, especially because I let this interfere with my revision time <_<
Was this comment useful?  Yes

ehhh
by chaos7angel
April 9th, 2011, 4:50pm
Rating: 6.0  / 10.0
it was ok but it was insanely long and to me after a certain point the manga kinda fell apart. I actually stopped reading and skipped to the end which wasn't all that exciting to me. Although, if you do like the art tyle and the nonconventional story it's good. Also, if you want a different twin scenario this is your manga.
Was this comment useful?  Yes

Mixed feelings
by naomi
February 26th, 2011, 11:27pm
Rating: 6.0  / 10.0
So I read this in one sitting, through the night actually, because the beginning was so good. But then, of course, the complicated stuff with the twins started to unravel and that, for me, was where it fell apart.

Spoiler (highlight to view)
I think it's pretty obvious, but it was when Dana died. It was just... so unbelievable, I had to literally slap myself to make sure I wasn't dreaming. Okay, I understand the the manga-ka needed something to split the twins up and find their true selves. But how it was done lies the problem.

I honestly didn't care one bit about Dana. She just appeared out of no where, and there wasn't enough time to build any feelings for her before bam, she's dead. So then that leads to the twins splitting. We have these volumes of their lives apart and how they change. Excellent. But truthfully? I didn't care. I wasn't even reading the pages properly. Skimmed it. Actually less than skimmed it. I was that bored. Mainly I didn't care for the new side characters either. But that was probably because I was just impatient for the twins to reconcile.

And when they did? Anti-climatic. That's all I can say. I don't know how else to describe it. Oh, maybe with a sigh as well. Roy and Anise's relationship? Nothing much to say there either.

The characters I loved at the beginning, I began to despise, especially Jake. I know he lost the one he loved, but was it really necessary to treat Anise in that way? No matter how much she reminded him of her, it felt like the relationship they built at the beginning didn't exist.

I shed a tear at the end. Not because I was sad it finished, or happy. But because I read something I ultimately didn't enjoy and wasted a whole night. I'm so disappointed that I'm typing this at 7am because I can't sleep. *slams keyboard*

Of course, it's my fault. It just means this series just wasn't my thing. But I never stopped hoping the manga-ka would change something and bring it back to the way it was at the beginning.

Memorable
by purfect_kutie64
May 8th, 2010, 10:09pm
Rating: 10.0  / 10.0
I finished the whole series in one day. The beginning was REALLY good! But then in the middle of the series till towards the end, the romance kind of fades away and focuses more on psychological problems. The series was really good though. Cipher isn't a typical shoujo. It's dark, has depth, and good characters.

--This is one of the more memorable manga that I've read.

A time trip
by akari_mizunashi
February 13th, 2009, 2:52pm
Rating: 9.0  / 10.0
Some people complain about the overwhelming "80s-ness" of Cipher. I personally love it! There are countless references to 80s music and television, the characters are all decked out in full 80s radicality, and the Michael Jackson doll dressed up in Barbie clothes may just be my favorite inanimate object ever featured in a shoujo manga. The portrayal of New York has a few flaws - it's obvious the creator has never actually seen the grittier areas - but it's actually pretty accurate and very well-drawn, especially compared with some other manga's idea of it (i.e. Marmalade Boy). The characters aren't collections of stereotypes like most shoujo mangas, and they too are very well-drawn if you don't mind the 1980s giant-eyed style (which I happen to adore). The premise is pretty ridiculous (this is 1980s shoujo, after all), but the storyline is still lovely and you may find yourself really caring about the characters.

Interesting Story
by sweeteden
September 16th, 2007, 6:31pm
Rating: 8.0  / 10.0
Although the art is not that great since it was made in the 80's; I gave this manga a chance and I actually quite enjoyed it a bit. I'm still reading it--I finished volume 7, moving on to volume 8. The story is pretty good and moving as well. Good characters--the main female character is not annoying and or weak. It's good so far and can't wait to read the rest! :]
Was this comment useful?  Yes