Login to add items to your list, keep track of your progress, and rate series!
Description
Yamada is the plant appointee; tending the school's garden of flowers on her own. She isn't the slightest bit athletic, she's actually quite clumsy. However, that doesn't stop her from having feelings for the star athlete in the class next-door, Kase-san. Slightly shy, Yamada is reluctant about her feelings for the enthusiastic Kase-san. Slowly but surely, the pair are helping each other to grow in confidence for both themselves and their budding relationship, each blush and brush of the hand at a time.

Seven Seas Releases:
Volume 1: Kase-san and Morning Glories
Volume 2: Kase-san and Bento
Volum... More...
Yamada is the plant appointee; tending the school's garden of flowers on her own. She isn't the slightest bit athletic, she's actually quite clumsy. However, that doesn't stop her from having feelings for the star athlete in the class next-door, Kase-san. Slightly shy, Yamada is reluctant about her feelings for the enthusiastic Kase-san. Slowly but surely, the pair are helping each other to grow in confidence for both themselves and their budding relationship, each blush and brush of the hand at a time. 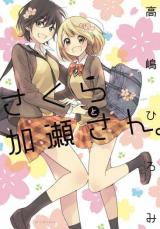 no real conflict
by riko_dewayne
November 28th, 2019, 4:36am
Rating: N/A
the conflict is pushed to be there. but i believe this could be better
Was this comment useful?  Yes

Fluffy RomCom Can Appeal to Anyone
by Bronia
August 22nd, 2016, 6:55pm
Rating: 9.0  / 10.0
The art starts off very sketchy, but as the story progresses so does the art- both get stronger as Takashima-Sensei gets a feel for her characters. The story arcs are very sweet and you can see Kase and Yamada grow as characters and as a couple. They go through the usual relationship hurdles, but one thing that's really great is that they avoid that old GL cliche "But... We're both... Girls!?". Yamada and Kase don't really have any issues surrounding the lesbian aspect of their feelings for each other, leaving room for Takashima-Sensei to explore their relationship in different directions.
It's a very fluffy manga but it's also quite realistic. These are two girls on the brink of adulthood as they discover their feelings for one another and try to figure out how to fit their relationship into their lives and their futures. It's a 9 because no manga can be perfect: the early art, some weird anatomical issues, etc... But Kase-San is so darn close to perfect! It's worth the hype that surrounds it amongst yuri fans and I 100% recommend it to anyone whether they are seasoned yuri veterans, casual yuri readers, or even people who like romcom slice of life manga with no preference for yuri.

Kase-San is tame enough that if you look past the girl-girl relationship, it can appeal to basically anyone who is looking for a sweet romantic comedy slice of life about those wistful last years of high school. Anyone who likes coming of age stories and stories about growing up could give Kase-san a try, even if they don't usually go for girls love manga.
Was this comment useful?  Yes

One of the better shoujo ai stories
by plotrobert
April 21st, 2016, 9:04am
Rating: 9.5  / 10.0
Really I don't have much to say about Kase-San besides "it's great". I mean the relationship actually progresses, they're a very sweet couple and I just wish there was more of this story. Sometimes I wish there was a little more... plot happening in the plot but I really do just enjoy it overall.
Was this comment useful?  Yes

Just consider it a depiction of the fluffiest warmest young love in a high school setting. There's no drama just elevated levels of happy. Recommended for people that want adorable love without any icky complications. An interesting note about Kase's character
Spoiler (mouse over to view)
is that she's a pervert. She has an active interest in Yamada, one where she goes the distance to subtly sneak a peek. Something you don't see really at all in this genre. I personally love that bit of her personality.

Top notch yuri romance
by Matic3d
July 24th, 2014, 1:22pm
Rating: N/A
This series has the potential to become one of the great titles in its genre, rivaling "girl friends" etc. I hope it gets a lengthy serialization: the characters are adorable, the art ranges from very good to inspired, and the story is solid and leaves the reader wanting to see more. If I was an editor this title would be one I would give top priority, if it can continue as good as it is now for 3-4 volumes it will be a go-to manga for decades.
Was this comment useful?  Yes

Pretty average
by MatrixM
April 28th, 2014, 11:15am
Rating: 6.7  / 10.0
read up to ch 8 (incl valentine's extra). In a way I like how they're both so oblivious, probably convincing themselves that things aren't as they are, as folk often do.
But mostly just average. Definitely shouldn't be rated third shoujo-ai on this website. I'll keep with it for now, though.

So cute it brings tears to my eyes.
by silencecomes
November 12th, 2013, 5:10am
Rating: 8.0  / 10.0
Seriously, it really does.
This is an adorable and pretty enjoyable yuri, which is pretty rare now-a-days. You a fan of sickeningly sweet yuri? Give this a try.
Was this comment useful?  Yes

Morning Glory and Kase-san
by NightSwan
March 16th, 2013, 3:03pm
Rating: N/A
So far, it's been quite adorable.
I can't say it's the best shoujo-ai out there, but it's certainly cute and nicely developed, even though I would have liked a more in depth look into the characters' lives and relationship.
The art is very pretty and the outfits as well as the girls are stylish and pleasing to look at.

Takashima Hiromi's work definitely appeals to the old perv in me.
Was this comment useful?  Yes