Login to add items to your list, keep track of your progress, and rate series!
Description
From Storm in Heaven:

Ten years ago, there was an explosion at Hisano's apartment building. She would have been there, but she'd been hit by a bike ridden by a boy in blood-stained clothes. He dropped a fake gem when it happened, and she's been hanging on to it as a good-luck charm ever since. Now Hisano's in high school. One of her teachers was murdered, and the police are investigating. A young man suddenly appears carrying the toy the gem belonged to. And perhaps... can he also see the hallucinations Hisano has always been plagued with? Everything is connected as the pattern slowly rises ... More...
From Storm in Heaven:

Ten years ago, there was an explosion at Hisano's apartment building. She would have been there, but she'd been hit by a bike ridden by a boy in blood-stained clothes. He dropped a fake gem when it happened, and she's been hanging on to it as a good-luck charm ever since. Now Hisano's in high school. One of her teachers was murdered, and the police are investigating. A young man suddenly appears carrying the toy the gem belonged to. And perhaps... can he also see the hallucinations Hisano has always been plagued with? Everything is connected as the pattern slowly rises to the surface. Less... 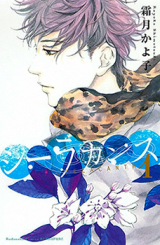 Good Buildup
by LUEser
April 5th, 2019, 11:05am
Rating: 6.0  / 10.0
Simple read with a good buildup. It doesn't really drag or rushed, I really appreciate this. It's got a few elements that I feel doesn't entirely mesh together
Spoiler (mouse over to view)
i.e. mental state (sheep), prostitution (killer), betrayal (female john), childhood (MC, Killer, and female john), etc.
because the incorrect characters are executing these problems. It didn't make entire sense as to why this character is making Choice A when the other character had more reason to make that choice. I just felt like the mangaka was trying to put some twists in the plot but didn't really think things through to make it more dramatic, or for what really matters to me, make common sense. So although the plot was generally well received by me, the thought process was a bit confusing. The artwork is, in all honesty, pretty typical but I like that the characters are distinguishable. The plot had very good tones: it was a little deep and emotional at the beginning with tones of "darkness"...as in, childhood darkness with signs of neglect and abuse, but towards the end, it was more enlightening. It was very rewarding.

I honestly just read this because i didn't want to commit to a long read. This is generally good. I would still recommend it.

-
by tohzuki
September 27th, 2015, 2:58pm
Rating: N/A
the art is good, the characters are interesting when examined alone, but as stated before the pacing is awkward. the mystery is good and hisano is your not-so-typical psychologically wounded protagonist, but the length of this manga take away from its overall potential. the relationship between hisano and yukinari is developed awkwardly, and even with all the explanations given by the ending, i still felt the characters were still lacking and the mystery and psychological aspect fell short.

Interesting but also a bit strange
by moonmystery
April 20th, 2015, 12:19am
Rating: 7.0  / 10.0
The story was pretty captivating until the end, when the twist turned an inevitable tragedy into a happily-ever-after... I thought that was a bit cheap.

The sheep stuff was also pretty interesting, but honestly I wished the manga dived into the issue of both people seeing sheep more. The pacing was another issue.
Was this comment useful?  Yes

Pretty good~
by Ariaofthesong
August 11th, 2013, 10:47am
Rating: N/A
While I admit that it was pretty good (acutally it was very very good) I did not find it to be perfect. There were a few flaws and plot holes I noticed that kind of turned me off, but other than that I enjoyed it immensely.

I loved the fact that the main character isn't whiny, isn't stupid, and does not care much about what other people think. I really loved the fact that she was slightly crazy... I mean a sheep...? Lol. And she knew this. I was surprised at how interesting she actually was and how she understood that love didn't have to be pure on the outside because it was pure on the inside. She connected with the male lead through an experiance that changed both their lives, and the fact that they both lived a very fragile and tragic life.

The male lead was perhaps the most interesting one I've come across. He wasn't any of archetypes, he was damaged but gentle, easily hurt, soft and hard, pure but not innocent. Even the fact that he was a prostitute didn't bother me. I felt so much for him that I overlooked that fact. In the end I was happy that he found someone that accepted him wholeheartedly, even if he may or may not have been a murderer. I think both of them are on a path of healing.

AND THIS WAS A SHOJOU MANGA! lol.

The only problem I had was that I knew exactly who the murder was in like chapter three or four. I had to wait to confirm it, though.
Was this comment useful?  Yes

Good one
by ColorlessHuman
March 14th, 2013, 6:27am
Rating: 8.5  / 10.0
Nice read. Story was very good. The psychological touch was the best. Though it didn't dive deep into the psychology, but it was executed fine. The romantic atmosphere was pleasant, unlike other shoujo manga. This is probably the best shoujo manga I've read (I didn't like any other that I read so far).

Characters were okay. Not much developments, but the emotions and thoughts of the MC was depicted pretty well.

Art was good, for a shoujo demographic. If it were seinen, then the art lacked shade and power.

Overall, it was a fine manga. I'd definitely recommend it.
Was this comment useful?  Yes

Sheep.
by kichiX
January 18th, 2012, 11:58am
Rating: 5.0  / 10.0
Everytime I read something like this, be it a manga or a book, I am always tempted to (and in most cases do) read the ending. I didn't with this, but after having completed the whole thing I can say this: skipping to the ending would not have helped me at all. This, I think, is a good thing. It means there is more to the story than can be shown in just a chapter at the end.
I wasn't expecting much of this manga. It's a story that has a surrealistic edge to it and I felt, after finishing it, that I didn't really understand, but at the same time, the questions had been answered. When I read other's comments I was slightly skeptical that a double suicide from ten years ago and the murder of a maths teacher could be so neatly linked and connected in just two volumes. I was proven wrong; the whole thing connected and it still had a twist at the end. A story I would recommend.

the sheep!!!
by whitespade
December 23rd, 2011, 5:02pm
Rating: 8.6  / 10.0
i...dont understand? i mean the mystery is good enough to stand in its own, why need it? of course solitary psychosis is acceptable but shared hallucination is just too weird. anyway, this story is quite long for a simple mystery but its because the stylistic choice where one page only have 3/4 panels. the art is nice, and the characters though not well developed it is good enough to carry their weight for the whole two volume.
Was this comment useful?  Yes

Gripping psychological drama.
by Hanjae
November 6th, 2011, 9:22pm
Rating: 7.0  / 10.0
This is was an interesting and gripping tale that begun with the murder of a maths teacher at Hisano's school, which turned out to be very much connected to a chain of events that happened 10 years ago. The psychological side was really well done, too, with a lot of twists along the way that kept things unpredictable. My only problem echoes the one mentioned in a few other comments; the ending felt really empty. Hisano seems to finally move on, but what about Yukinari? The way they seemed to want to find a way out through death at one point also felt really sudden, and nothing's ever mentioned of it again. The only character I really liked was Kentarou.
Was this comment useful?  Yes

It's touching, it's good and I'm happy to say it wasn't a waste of my time. I'm feeling strangely satisfied, but somehow a bit empty, too, it got me thinking.
The ending wasn't bad. Still, quite short and not clear cut. It's not the best ending around, but it also didn't have any glaring flaws.