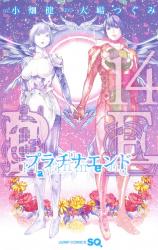 Note: You must be logged in to update information on this page.
Forum Posts Click to view the forum
Platinum End Gets TV Anime in Fall 2021
over 2 years ago
First impressions.
over 4 years ago
Platina End's mc
over 5 years ago

What the hell
by jay_walked
September 9th, 2017, 4:54am
Rating: N/A
Now now, it's always great to have unexpected characteristics or MCs, but I sure didn't appreciate the MC's cowardliness this time. As a review above has said, the creators' names attract me. However, after reading about 4 volumes of Platina/Platinum End, my reaction was a "What the hell <insert interrobang> " Frankly, I'm thoroughly disappointed by the protagonist and his love interest. The only character I liked was Nasse, since she had some sense.

MC - Our protag Mirai starts off as this kinda desperate for happiness but a good heart guy. He means well, no lie. We can admire what a great citizen he was, with his honest love for the love interest, Saki. However, he later becomes a total goodie-two-shoes who's unable to do shit even when he has a chance. YOU CAN'T GO THAT FAR. It seems that he's unable the realize that he's in a sort of death game, where the competitors are hunted like animals. I liked that he was realistic at first, until he started going all "I WON'T USE THE WHITE ARROW" and refusing to hurt anyone. He was a terrible MC.

Love interest - I didn't like Saki at first because she was a bit useless and made Mirai her slave/victim/whatever. So my opinion didn't really change once I was midway through the series. Mirai was getting ready to fight Metapoliman <is that how you spell it? I can't be bothered to check>, and surprise surprise, Saki cannot join him to fight Metapoliman. Of course, looking at it strategically, she really couldn't fight him. But for the love of character development and some actually contribution, I found her pretty damn useless.

In conclusion - art is great, plot would've been great, character development is annoying and may be nonexistent.
Was this comment useful?  Yes

Where do I start?

The art is good as expected from this duo. The premise? Not so much. I admit it's been a while since I've read a popular angel manga, but squishing a "death game" theme into it feels a bit jarring. I put "death game" in quotations, because as of the last chapter I was reading, nowhere did it mention that the only way to become God is by KILLING the other 12 God candidates. It is never explained HOW the next God is chosen, only that there will be one. As far as I know, the current god picks his successor. The current god also chooses which of his angels get promoted/demoted, and it is revealed that he does so almost randomly. So given this info realistically you can do nothing and have a 50/50 chance of becoming the next god. There's no reason to kill.

Unless you are a sociopathic villain-archetype bent on gaining power due to a traumatic life experience, who's coincidentally also a genius. Which this manga has.

Now, let me get to the Main Character (MC). His character design (and costume!) screams Edge Lord. It's a skin-tight black metal suit with a mask that only covers the bottom half of his face. And it come's fit with an Assassins' Creed hood! He's also a bit of a wuss. Don't get me wrong; I get that he's a nice guy (coward), but there's a limit to how much of a Mother Teresa a character can be without coming off as cringeworthy/annoying. I wish he were more decisive cause I can't stand spineless MC's who live by a "code" (his is "rather get kicked in the face than kick someone"). His morals are kind of unrealistic considering the "kill or be killed" atmosphere, but I guess this is what happens when a manga is serialized in a shounen magazine.

All of the characters' motivations are so straightforward and bashed into the readers' faces repeatedly. It feels like an insult to the readers' intelligence. To put it bluntly, it's two-dimensional. I was attracted to the names of the this manga's creators, but I don't know how much longer I can stomach it.
Was this comment useful?  Yes

Fail
by kronpas
July 8th, 2016, 8:37pm
Rating: 1.0  / 10.0
Common battle royale plot, great art ruined by underdeveloped protagonists. You d expect some sorts of development from him now after 10 lengthy chapters, instead he keeps spout the same nonsense. Its so wrong on many levels to let him whine incessantly 'dont die dont kill' on the same panels as a dying of illness man planning his death match. The art is greatly improved from Death Note but the plot suffer horribly, so sad to see my fav duo mangaka fail so hard this time.
Was this comment useful?  Yes

Disappointing
by Katsono
May 31st, 2016, 5:35am
Rating: 6.0  / 10.0
After giving us Bakuman and Death Note, two works which had each their own appeals and were really great, you would of course expect a lot from this new work of Ohba, the mysterious author who sometimes cooperate with Obata. Unfortunately, this is nothing like their previous combination, and here we have a rather disappointing and even mediocre manga.

The first chapter did not have anything amazing, however we were still given a sight of how much Obata's art has improved over the year, and finally there was indeed something which looked like an interesting idea, the premise being that an angel gives our main character special abilities, which was quite reminding of Death Note.

However, it all goes wrong when instead of having our protagonist wreak havoc in a way similar to Death Note, or even do good deeds, we instead have a competition between more people chosen by other angels to decide who will become the next God. Will the winner be chosen over his good deeds or capacities ? This was never explained, and it doesn't really matter since it turns out to be a battle royal with everyone trying to be the last man standing.

Still, it could have been a good manga even with such a plot but it fails horribly. The main character seems wise at first, hiding and waiting for other to act, but instead of becoming the fisherman he gets stupidly caught by his love interest who coincidentally turns out to be a chosen too, and makes him her slave. Following that, they act like wuss and keep hiding without doing anything. The story then either shows them doing literally nothing but hiding in their house, or battles between other people.

And here again, it's just horrible. From Ohba and Obata's duo, you would expect smart battles similar to what happened in Death Note, or even something like Hikaru no Go but certainly not. Here we have absolutely nonsensical but "wise" battles with random explanations thrown at every stupid action. What's even worse is that they aren't even on the same footing since the beginning, because the angels aren't on the same level either and not everyone possess every power like the main character.

If not for this being the work of two authors I greatly enjoyed, I would certainly not continue reading something so mediocre, and the art still rises my appreciation by a lot more than it should be. I would not however recommend reading this to anyone, as it's nothing but disappointing.
Was this comment useful?  Yes

Cool story, good premise but...
by GodricKharg
November 17th, 2015, 12:24am
Rating: 7.5  / 10.0
Don't get me wrong, for the 99 cent price at Viz Media it's an excellent manga to read and follow. And while I instantly see how I will enjoy the story as it unfolds I can also see more of how every story is just another rehashed of another.

While it's true here, it still seems to be interesting.

Our MC is severely depressed, his parents killed years before and forced to live with his aunt and uncle who force him into slave labour.

Our MC DECIDES TO END IT ALL.

Our MC however has a guardian angel. Her goal? To help him find happiness.

Unknown to our MC however, She has 999 days to do it, or he looses.