Login to add items to your list, keep track of your progress, and rate series!
Description
The story of how Qiu Tong and Sun Jing met and fell in love.

Original Webcomic is published on the author's Weibo. 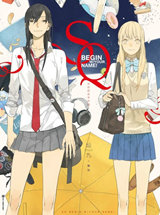 Note: You must be logged in to update information on this page.
Forum Posts Click to view the forum
Chinese internet anti-gay law...
over 4 years ago

One problem is that some of the chapters are like extras that are out of order. As in the author is writing the main story and then will throw in a comic that happens at a different time and it's confusing especially when for example one christmas special appears ot have them alraedy living together, which I assume means after high school (which is like at least 3 years in the future cos Sun Jing is 1st year)

Oh! and the art is so so good! All the girls look so cute and the half the guys handsome in a realistic way.

Edit 2: Shit...so turns out almost nothing has been published in a couple of years bar the very rare chapter/extra thanks to CCP censorship laws.
Damnit...this series was too good to be true T.T

I love this work!
by coffeepancake
July 17th, 2019, 1:46pm
Rating: N/A
The art is amazing and the writing is hilarious. I find myself often grinning or smiling when reading through the chapters. It's a great pick-up if you want a light yuri/shoujo-ai read.
Was this comment useful?  Yes

SO HAPPY
by iamananimeniac
November 12th, 2017, 8:30pm
Rating: 10.0  / 10.0
the art is so prettyyy :3
Also Sun Jing's mum actually WORKS (really rare in manga/manhua) and when the girls run they actually run like normal people

*shocked from happiness* It's fun to read too

One of the Cutest Things I Have Ever Read
by bunnyteeth
August 23rd, 2016, 10:31pm
Rating: 9.0  / 10.0
I really love this. When I read this, I get such a goofy grin on my face from the absolute cuteness of the characters relationship! If you love adorableness and shoujo ai then definitely read this because it's just so much fun to read. The art is gorgeous and it's fully in color (if you like that). The chapters are pretty short, but there's quite a few out already and updates are relatively frequent and steady.

Seriously, there is such a shortage of girl love content that this is a real treat for anybody who wants some more diversity in their reading. It's very sweet and cute and hilarious and light-hearted with little drama or typical misunderstandings that happen in a lot of shoujo romance manga so it's a refreshing read.
Was this comment useful?  Yes

This Is Great Stuff!
by 5Cats
July 5th, 2016, 8:14pm
Rating: 10.0  / 10.0
It moves along slowly, with lots of side-stories, and sometimes is clunky or weird...
But overall? It's is just fantastic! The characters are so real-life, the art is realistic and yet beautiful, and the story is just riveting.
Cast aside your doubts about the format, or "it's not from Japan" or Yuri, and just read a terrific story being told by a master.
Was this comment useful?  Yes

Eye-openingly, jaw-droppingly STUNNING... this from someone who'd have scoffed at the very idea of a full-colour, made-in-china yuri manga
by Aadieu
September 7th, 2015, 9:30am
Rating: N/A
Melts riiiight through your preconceptions. This is no knockoff and no wannabe. No pale immitation here... if anything, it OUT-YURI-MANGAS most yuri manga.


...still no clue if the author is a diehard orthodox yuri j-manga fan or this is how top quality Chinese webtoons are supposed to look, but color me shocked, impressed, and ashamed of any prior predjudice I had.
Was this comment useful?  Yes

Fantastic
by BubuMC
July 18th, 2015, 8:09am
Rating: 10.0  / 10.0
Yuri/Shoujo-ai are my favourite genres, and since this was the highest rated Shoujo-ai, I figured, why not try it. The format took a bit of getting used to: it has short strips instead of normal chapters (maybe that's just a manhua thing; I haven't read any others), and the story doesn't really go in a linear fashion all the time. However, after you get past that (it isn't difficult), it is a fantastic work. It is hilarious, and it has some really adorable moments, which I love.
Was this comment useful?  Yes

Funny as hell
by Lyrad
May 26th, 2015, 2:25pm
Rating: 10.0  / 10.0
Like RAGApeace below, I too don't usually reads Yuri but the art gets me interested since it looks awesome and the first page of the first chapter hooked me for being golden.
It's short and all over the place chronologically but it's undoubtedly hilarious as well as adorable with the couple's interactions. It also have an awesome non-romantic male-female best friend.
Was this comment useful?  Yes

I don't usually like reading Yuri but...
by RAGApeace
April 5th, 2015, 10:36pm
Rating: N/A
...this was too hilarious not to read. That and the couple was very sweet. But more to the point, Sun Jing is one of the best, and the funniest, romantic leads I've ever had the pleasure of reading. She makes you really want to cheer for her (poor girl). I especially love her bromance with Qi Fang. Oh, they're just too much. I've been wanting to read a good female/male super-close-but-only-friendship and this one just hits it perfectly.

Yes.
by NightSwan
February 19th, 2015, 2:02am
Rating: 9.0  / 10.0
This is freaking adorable and hilarious. The inserts are just beautiful and titillating.
Basically a GL counterpart to Old Xian's One day - 19 days.
The main difference though (besides them being girls) is that there's mutual expressed affection between the girls (and I don't think that's a spoiler, given the description).
I love it.

I laughed out loud several times.
Was this comment useful?  Yes