Login to add items to your list, keep track of your progress, and rate series!
Description
(note: "giglio" means "lily" in Italian.)

A wounded soldier with a disturbed mind kidnaps the priest who tries to help him. He then has the brilliant idea of going AWOL with the priest. He's in the middle of the African desert in WWII, with supplies running low and his sanity (or is it his morality?) long gone. All that's left is pleasure and agony. And maybe, eventually, death.

Reprinted in volume 1 of Re:Collection

Latest Release(s)
v.1 c.1-2 by Dangerous Pleasure over 12 years ago
c.1 by Mysterious R over 15 years ago
Search for all releases of this series 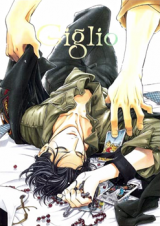 basically written by a random number generator
by lilliful
October 27th, 2014, 8:20pm
Rating: N/A
I've read a lot of yaoi since becoming interested in the genre 14 years ago, including other works by this author, and works with equally or more controversial themes. More than anything, this work is nonsensical -- a veritable non-sequitur. I didn't find it shocking, gross, hot, or even interesting. My response is a mere "huh?"
Was this comment useful?  Yes

well done
by MirayAllen
June 1st, 2013, 1:21pm
Rating: 9.0  / 10.0
I'm impressed with the author's ability to convey such a varied range of feelings in so short a time. I wouldn't mind, of course, if this had been longer, but not because I was in any way unsatisfied with it; I just wish I could keep delving further into these characters, into their rotten, painful, beautiful life. You don't need a multi-chaptered story or an endless number of volumes to fuel, to flesh out the characters: a good storyteller will do it regardless space, and that's what you get from this wonderful tale. Can't wait to check more of this artist's works.

The art was a straight 10 out of 10 and more.
Was this comment useful?  Yes

moving
by Suiren-nyan
May 25th, 2013, 10:33am
Rating: 8.2  / 10.0
I kinda feel like puking righ now, heh. The 2nd chapter was pretty upsetting. But this doesn't mean the story is bad or gross, your impression doesn't have to be like mine. I think it's a quite unique, interesting (or maybe it's just shocking and disturbing?) story. The characters aren't anything special (in my opinion, I don't like either of them-- maybe if the story was longer...) but the situation is.

I admit I have mixed feelings because if not for that bit that shocked/upset me, I would probably consider this one-shot kinda boring. I don't priests and religion stuff...
Was this comment useful?  Yes

interesting and disturbing
by cookiepie
September 6th, 2012, 7:04am
Rating: N/A
Was the soldier shell shocked or just highly immoral. He attacked a priest with little remorse. Why didn't the priest scream or fight back in the tent? How old was the priest? He looked to be in his early 20's, the soldier in his 30's. The monastery's reaction to the young priest being raped should have been explored more to a greater extent.
Was this comment useful?  Yes

okay.
by countingwounds
August 13th, 2012, 6:31pm
Rating: 7.5  / 10.0
not as eye popping really, in my opinion, but to some degree it was. it was edgy, and skimming on themes without going too much into depth with them. Good thing? Bad thing? That's really up to you. I thought the sex scenes were pretty hot, though. The art was wonderful. Those are really the main reasons for the high rating.

Did we all read the same manga?
by supmaguire
July 15th, 2012, 9:06am
Rating: N/A
It was too short. The characters were not fleshed out enough. I'm not bashing the controversial plot, but this manga should not be rated highly just because it has an edgy theme. I guess I'm giving such a low rating b/c i WANTED there to be more than those 2 measly chapters--I felt irritated by the end like, "what, this is it??!!"
Was this comment useful?  Yes

Emotionally Touching
by Bunny-chan
July 3rd, 2012, 8:11pm
Rating: N/A
The Art: A+ (it's very well done and the attention to detail is wonderfully mastered, as expected of Inariya)
The Story/Plot: well thought out and made with love, most definantly

Fusanosuke Inariya weaves emotion, fantasy and tragedy in this tale, with some of the sad truth of the battlefield. Men got appendages blown off in WW II, it's wasn't uncommon. Orlando getting his penis amputated shouldn't be too much of a surprise to the reader. This is a tragedy story, a tale to pull at your heartstrings and make you cry and think about the cruelty of being human.

I give kudos to this work.
Was this comment useful?  Yes

finger biter.
by otakuness
May 19th, 2012, 1:44am
Rating: 8.5  / 10.0
i was like damn only two chaps? i mean i thought i missed what happened in between but that was it.. and the castration part was like a joke. a surprise liek saying, "you want sex? here i cut of my penis so no sex for you! haha!" it just felt like that but whatever its still so hot and the sweet restraint, dear god, help my soul! im not suppose to want it but dear god it is so hawt. the art is gorgeous! its just that its felt skippety~ thats my one critique and i kept looking for some sort of continuation but theres none so i guess thats it? couldve been longer damn it.
Was this comment useful?  Yes

I've got to give credit to Inariya. She pulls off my fetishes so well and accurate I could just kneel over and become her dog or something. This was a particular favorite of mines. What started out as a tragic ending up in a similar situation. It's very compromising and leaves you with goosebumps, if you're really feeling the theme here.

One of those "Forevers"
by blueshadows
December 1st, 2011, 8:32pm
Rating: 10.0  / 10.0
This story is one of those things you remember forever. it's so beautiful and touching.
i kind of didn't like the
Spoiler (mouse over to view)
part where he was castrated and all, like ew.
but the
Spoiler (mouse over to view)
part when he was first raped was funny-ish (pray? seriously?) and when he wanted dante after the rape (hate>love??)
was pretty good to.
Was this comment useful?  Yes