Login to add items to your list, keep track of your progress, and rate series!
Description
After losing a game, Sora Andou finally felt the limit to his talent and decided to quit soccer before middle school graduation; however, a surprise meeting with Shiki Wakamiya, the representative of Japan's national women's soccer team, enabled him to see again what he used to see―the pure joy of the sport that shaped him into who he is.

This is the story of a boy who inherited the will of a girl, and a series of warm encounters―from friends to strangers―during the journey to his ultimate goal: to become "1/11" of the world's best soccer team. 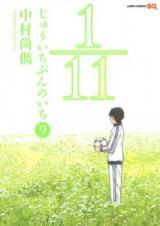 Note: You must be logged in to update information on this page.
Forum Posts Click to view the forum
1/11 manga gets film adaptation
over 9 years ago

An incredible sports manga
by Katsono
May 20th, 2022, 11:09am
Rating: 9.5  / 10.0
At its core, 1/11 is a football manga but it's also a sort of coming-of-age story about multiple people whose lives end up having something to do with the main character. That's right, this is a manga about a football player, but almost the entire story is seen through the eyes of other people and this is what makes it incredible.

Every chapter is about why someone would start playing football, their motivation, or sometimes a different subject but with the same problems: why does one get motivated to do something or why do they invest themselves into an activity? It may be about football but what it shows could apply to other sports or hobbies. It also shows that football isn't just a sports for pros or people wishing to reach the Champions' league, sometimes it's just a game you play with friends or an activity you do to release stress, and that's fine too.

The narration was really great, constantly alternating between people who're related to our hero Andou and who have their own life problems, while at the same time keeping an eye on the main character. It establishes a character who you learn to know, but at the same time remains quite mysterious as you don't see his inner monologue or ever follow him directly. The story follows most of his eventful life and at the end of it feels like you've read a bunch of articles about a popular football player's life. His reasons of origin, what kept him playing and the hardships he went through, but not much more than that. It was an interesting way of seeing things and it kept the manga short while also allowing the author to move forward every chapter, unlike most sports mangas which follow a character from close-up and are usually centered on a fixed period of time like high school.

Very good soccer manga with various characters
by Theoneyedsnake
August 19th, 2020, 8:25pm
Rating: 8.0  / 10.0
The manga was great without a doubt. The characters had their own unique personalities which really made their own unique plots and growth interesting.

If I had one complaint, it would be that the manga doesn’t feel absolutely complete. There are characters mentioned to be important people to the protagonist, but never had their own stories. There is even a really big event that never got an arc, which based on the mangas writing style should have one.

This doesn’t mean that the manga isn’t well written or doesn’t have an ok ending. But if it had just one or two more volumes to tie everything up and make a better ending, it would be amazing.
Was this comment useful?  Yes

a very good, very varied manga
by Swifft
September 12th, 2016, 5:12am
Rating: N/A
I have not read the entire series, only what's been translated, but I thought pretty much all of it was A+ material. I wrote a review explaining my thoughts in length. To summarize: it's a strong "tearjerker" series, but because of that I'm personally worried over whether the attempts to get you sad, hopeful, or tearful will get old as the series continues. Thinking positively: although it's a "soccer manga" a lot of the time it's a "tangentially related to people who are involved with soccer" manga which means at the very least there's varied subject matter. There's also the fact that the series bounces around in time, and is not linear, making it unpredictable or interesting given the perspective you're building up. Definitely deserves more attention regardless of whether or not the quality keeps up.

FANTASTIC
by Lacream
August 2nd, 2013, 3:57pm
Rating: 10.0  / 10.0
I can't really describe it but this manga is so moving that i almost creid after each chapter. The characters and their stories and attitude are coming to the fore. The Stories are told unbelievable well and are very intoxicating. So just read it! It's really one of the best Mangas i ever read!! READ IT! OR YOU REGRET FOR THE REST OF YOUR LIFE! IT'S AWESOME...JUST READ IT!!!
Was this comment useful?  Yes

Special
by dirx65
November 13th, 2012, 6:43pm
Rating: N/A
It's been a long time since i've read a manga which actually makes my hair stand up from the drama. This manga displays some deep topics concerning the character's lives and the reasons why they play the game which they love which is football.
Was this comment useful?  Yes

Top Notch
by gokai
July 9th, 2012, 4:49pm
Rating: 10.0  / 10.0
The art is good and clean and the story is superb. The first three chapters each focuses on a different character. So that might be a turn off for some but you should really read this for the great writing. The story is more realistic so I would say this is more a Seinen series rather than a Shounen one.
Was this comment useful?  Yes

I Can't Believe It
by yuno19
March 9th, 2012, 2:32am
Rating: 10.0  / 10.0
It has been years and years I keep only one manga get my full 10 point. And it has been even longer since I expect nothing much from sport manga (for how predictable it is). But today, things changed. This particular manga get a 10 for how sweet it is. Sweeter than even most non sport manga. To sense-scan, congratulation for getting your hand on this manga earlier than anybody.