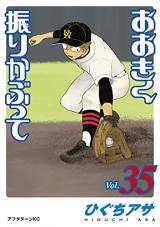 Real characters!
by MondSemmel
November 8th, 2015, 8:11am
Rating: 10.0  / 10.0
This manga deserves all the praise it gets, and I won't repeat all of it here. What stands out to me in particular, though, is how big of a difference it is to have a female mangaka draw a sports manga. I've read (parts of) a gazillion baseball manga, including all the Adachi manga (which I adore), Major, Diamond no Ace, Last Inning, etc. Most of these share themes like hot-blooded or coldly efficient protagonists, infighting among team mates, insane amounts of training, and more. But Ookiku Furikabutte is unique and uniquely realistic in its depiction of aspects like parents' involvement in the game, self-doubt, growing up, communicating properly, and so on. Truly remarkable - and so much fun, too!

The dynamics between pitcher and catcher are another highlight. I can't think of a sports manga protagonist with a weaker personality than his, and this lends the series so much character. In fact, all characterisation in this manga is excellent! Even support characters feel like persons, rather than tropes (tsundere, hot-blooded...).

Basically, I can't praise this enough.

It was a bit difficult in the beginning due to Mihashi Ren's self esteem issues. But I liked how every character had their own personality, and while I sometimes was unable to differentiate between characters in Nishiura and even outside of it, I couldn't help but relate to how real the characters were. The best thing about this manga is that realistic quality. Each person had their weaknesses, and some knew it, some refused to acknowledge it, some didn't understand what their problems even were, yet all of this tied seamlessly into the storyline as it progressed. I'm speaking about the team members of both Nishiura and the other schools, such as Musashino and Bijou. I was also impressed with the level of attention given to the other schools.

Awesome!!
by kekkaishistar
April 9th, 2013, 7:45pm
Rating: 10.0  / 10.0
I tend to be very picky on what manga I consider well done. Oofuri or Big Windup is one of the few that I believe is extremely well played. I generally don't like reading or watching sports anime/manga, simply because it tends to over-exaggerate the characters and the sport. But Big Windup isn't like that. The baseball in this is really reasonable and like many people have already said, the mangaka DOES know her baseball. She can create such amazing realistic plays- the fruit of her 10 year long hard research years have definitely paid off. I love Nishiura's baseball team, its filled with all these interesting characters with incredibly different personalities. Its interesting to see how their love for baseball really ties them together. I love Mihashi too. He's a shy crybaby and though he does get on my nerves sometimes, I find him to be a very enjoyable character, especially because of his incredibly funny facial expressions. Tajima- is one of the characters you will definitely love, he is very gifted but never flaunts his wide range of abilities. Put Tajima in any position on the baseball field and just naturally he shines bright. He has a lot of self confidence, is optimistic and hilarious. Well made character foil to Hanai.
The catcher, Abe was also well made. He is very perceptive during the game, has a tough attitude and plays it cool majority of the time - except of course if Mihashi irritates him (happens often

Coach Momoe, the advisor, and the manager- are also well made characters.
I could go onto list every character in this story simply because they are all so memorable.
Every character is well developed from opponents to the Nishiura Team members to the parents- we get an insight into their thoughts and see baseball through their eyes.

What did fall a little short for me was the art- but just a tiny bit, since I love her style. With just a little bit more practice drawing, the mangaka will be to create a very unique style

Best sports manga out there
by arouraleona
September 8th, 2012, 6:15am
Rating: 9.0  / 10.0
The mangaka really knows her baseball. That's the first thing that REALLY stood out to me. She also knows that she's sneaking in some super BL into what is essentially a romance-less sports manga. Think Gundam Wing. But more. Because she's been known to create side art (not quite dj, but close) of Mihashi and Abe being very ... close like...

The characters are generally fantastic (it's impossible to hate Tajima), and the sports are beyond well done. Fantastic find! Please read!
Was this comment useful?  Yes

Character Development
by Chibiheaven
May 28th, 2012, 1:45am
Rating: 8.5  / 10.0
I first caught on to this particular manga when I saw my sister watching the anime. She was about half way through the first season when I sat down to watch a bit. My first impression was: "The main character is wayyyyy too wimpy, definitely not my thing" So I ditched it without a second thought. I came across it later on and decided to give it a chance and watch it from the beginning. Although he still does occasionally annoy me, I understand the reasons behind it. You can see development not only in the main character but the rest of his team as well.

I think this is immensely interesting, it's a unique spin from the other baseball/sports manga and anime out there. Though it may not be just anyone's cup of tea, I suggest giving it a try before writing it off.
Was this comment useful?  Yes

Really really really love it
by monkry
May 18th, 2012, 6:12am
Rating: 10.0  / 10.0
I really really love it!
Seeing they form the club from nothing, and seeing they win and lose, I felt like I'm there with them...
Ah that's why I like story where they form something from nothing, because It's like 'I watch them from nothing to something', it kinds of harboring a feeling... hmmm how to express it in english... kind of... affection? Feelings like 'I'll always support them!'.
Not to mention the development of the main chara, Mihashi. He's very, very unique. Sometimes I really want to slap him with chair, but he also adorable I think, because he also tries as hard as he can.
And alllll the Nishiura player is sooooooooooooooo adorable!!!! Very, very, very adorable!
Gyaahhhhh I hope Higuchi Asa will end it, at least, after Nishiura reaches Koushien!
I beg you please make it as long as possible Higuchi-sensei!!! (/ T0T)/

Decent but poorly paced
by Uthred
January 6th, 2011, 8:39pm
Rating: N/A
As the subject says, its a decent manga that gets progressively worse as it goes on due to woeful pacing. Quite simply the games take too long for no valid reason (i.e. even though the games are long theres very little in the way of character or plot development). It gets especially bad in the later volumes where single games span multiple (200+ page) volumes
Was this comment useful?  Yes

love it <3
by hachi88
December 16th, 2010, 6:37pm
Rating: N/A
at first i just had a lot of free time and i started searching for a new series and ookiku seemed to have a nice review. i need to be clear i know nothing about baseball and after reading the manga i know a little. what really catch me was the characters personalities, mihashi´s funny faces and the fact that even though it´s a sports manga there are no superpowers or highly unlikely to be real techniques (prince of tennis, hajime no ippo, etc) the realism it´s like a breeze of fresh air
so in two days i end up reading every chapter available out there and like a junkie i am suffering from withdrawal xD
so i recommend it! ok you might be disturbed from all the shonen-ai insinuations *but then again if you contextualize it they are not creepy* i get it even though i am a female i don´t enjoy it ¬¬ but then again as a friend once said to me "every shonen manga can be yaoizable" so don´t turn down this awesome manga just because there is a few a like you between men.
ah! and the art may seem weird and ugly *never thought so actually but there is people who thinks that way* but it grows on you.
Was this comment useful?  Yes

Has some strong points
by Deva
May 5th, 2010, 4:57am
Rating: N/A
- very realistic
- extremely good explanations of baseball, even if you know nothing about baseball you can understand it
- great female lead, unique in every way
- mediocre art and I have to say most of the characters look kinda ugly

Sounds like a great baseball manga ? Well it would if it weren't for the primary protagonist. I don't mind wimpy characters and crybabies but this manga takes it too far. Ren Mihashi cries about everything (and I mean everything) after a while it was just too much for me.
All the strong points of this manga couldn't help me to ignore the major turn off, the unbelievable unrealistic protagonist.
Was this comment useful?  Yes

Nice baseball manga~!
by angeline_chong94
October 24th, 2009, 2:55pm
Rating: 10.0  / 10.0
At first I was just reading at it half-heartly, but soon, it became more and more interesting! And there are some part where it made me laugh! Mihashi face is interesting to look at. The anime also very nice~!
Was this comment useful?  Yes