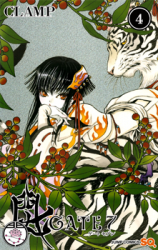 Note: You must be logged in to update information on this page.
Forum Posts Click to view the forum
4 Volumes (Complete/Discontinued/Hiatus)???
over 5 years ago

Pretty But Shallow
by Nemurenaiyo
May 17th, 2016, 5:57am
Rating: N/A
This is a classic, typical sort of CLAMP manga. It's undeniably beautiful and intricate but the downside of this manga (like most of CLAMP's works go) is that the characters have no depth. The story has no depth. And it is fast-paced but it's just difficult to get into (no matter how many times you re-read the previous pages or panels) because it just has no depth. So it's a total waste of good, interesting characters (if you take them at face value, anyway).
Was this comment useful?  Yes

See, the thing about Gate 7 is that if you want to understand the story, you have to pay really close attention to what all the characters are saying. Clamp actually does a fairly decent job explaining the universe they created in-series, but the only problem is that they spend pages explaining. The constant references to historical figures too might be a bit confusing for those not familiar with Japanese history (though, in my personal opinion, it isn't too bad as long as you read all the explanations).

Other than that, though, the art is absolutely gorgeous. (Of course, it is Clamp.) The characters are interesting enough. And the central mystery (about who Chikahito is) is actually compelling enough for me to keep reading.

I definitely would not recommend Gate 7 to everyone though. It's not a good series for a light or quick read, and it's one of those manga that work really badly as a serialization because you can't remember all the important bits for next time. It is definitely worth a read, if you have the time and brain power for it.
Was this comment useful?  Yes

Not bad but a little suspicious
by Tsuzuki
September 12th, 2012, 9:09am
Rating: N/A
Well I've read just the first volume so I can't really judge it yet but Subaru-kun looking guy (with the X sorrowfull look in the eyes) and the Watanuki like Chikahito, make me fear for another crossover manga. I mean after Tsubasa, this thing of the crossovers is became quite annoyng to me. Why not end X and Drug and Drop instead?
Was this comment useful?  Yes

Typical Convutlated CLAMP
by superman89
May 24th, 2012, 4:10am
Rating: 3.0  / 10.0
In a nutshell. A bunch of guys who look like women stand around acting like they're the greatest thing since sliced bread. A boring MC that has done nada nothing, but stand at the side giving us history lessons for the entire three volumes.

Not sure what the one reviewer means by don't quit early, because nothing has happened since their review. It's been 15 chapters or 15 months and the plot has hardly moved anywhere. The MC, ah who cares he's useless. I got tired of waiting for him to do something or something be revealed about him, but it just doesn't happen.

I'll come back in a year or two and see if the story has moved any.

subtext in every single relationship
by blackmokona
April 12th, 2012, 11:06am
Rating: 6.0  / 10.0
It's practically a tragedy that the art is CLAMP at their most consistent and detailed and basically mature, though not quite as stylistic as xxxHolic. But the Chikahito is utterly bland and Hana is unrelatable. They obviously have big ambitions with the plot, which makes it all the sadder.

Character introduction is basically "It's []!" // "You mean the one who []". And for all the trouble it's really hard to keep track of all the characters. Color code your friends and enemies please.

This one misses all the hallmarks of good CLAMP storytelling -- genuine chemistry and profound underlying questions in simple premise, but hits all their bad habits -- irretrievable plot threads with subtext in every single relationship.

Too scattered to be fun
by bunny_tsukino
March 30th, 2012, 6:23am
Rating: 5.0  / 10.0
The first book took a bit, but I started enjoying it. I'm halfway through the second and it's just off the rails. Instead of fleshing out the characters that have been introduced, new characters keep popping up left and right. It's hard to keep track of who is an oni, who is a friend, who is part of the core group, and so on. If they had focused on the main cast of four for a volume or two, I'm sure I'd be really loving it, as the art is beautiful. Too bad, I can't keep the characters straight when a new one is introduced every 10-15 pages.
Was this comment useful?  Yes

Stunning art, confusing plot
by Chokolade
December 26th, 2011, 9:49am
Rating: 7.0  / 10.0
I know there are many others like me who read the first chapter and was completely lost. For a change, this CLAMP manga needs a thorough understanding of Japanese folkware and stories to relate to the plot. I don't know whether local Japanese readers would find this easy to follow, but I personally would prefer not researching all that background info just to read one manga.

However, the artwork definately makes up for that- I find this one of CLAMP's most beautiful and detailed mangas. It's stunning- just looking at the colour pages makes me sigh in pleasure. I'm also impressed that despite CLAMP numerous charcater desings, they have managed to introduce countless new unique charcaters who all look unique and orginal.

I would say that even if you don't know an eyota of what's going on, then Gate 7 is worth glancing at for at least its captivating art.

Wow, strong reactions but no logic to them
by artdjmaster
October 23rd, 2011, 3:18pm
Rating: N/A
The reviewers below all have expectations for this manga, but they're all wrong to even have any. It would not be a good idea to reference past CLAMP works in this manga because that would not be fair to new readers. It is good that they started fresh (and maybe they will introduce old CLAMP characters later on).

I personally see much depth being added to this manga. As usual, CLAMP starts out the story vaguely, but you can see what the whole story will be about in the first volume from Dark Horse. The story has to do with opposing forces: Tachibana is light, Sakura is shadow, and Chikahito and Hana are in between (except Hana "takes in all things" and Chikahito "leaves out all things"). It's very good to see CLAMP tackle philosophy yet again. It's what makes a CLAMP manga.

I know Hana right now acts very cute, but obviously CLAMP has placed much emphasis on this character so we will see her/his importance very soon. This manga is definitely better than Kobato, I hope it goes on for a long time.

This review is based on the print edition from Dark Horse (released October 2011).
Was this comment useful?  Yes

Enjoyable
by liquidsin
April 27th, 2011, 10:50pm
Rating: 9.0  / 10.0
Coming from someone who hasn't read any CLAMP stories thus far, I'm really enjoying this series. The actual plot and background begins in chapter 3, which is ironic as others have already trashed this before seeing what it's truly like. It's easy to compliment the art style, and I'd easily recommend this manga to friends. I'd probably wait for a few more chapters before doing so, though, but that's only so that they could get a better sense to where Gate 7 is going.

CLAMP??..
by akurashy
March 6th, 2011, 2:50pm
Rating: 3.0  / 10.0
I love CLAMP, the art is awesome like always but .... I think most of the comments got it right onthe character resemblance, nothing original to bring out new characters, I'm expecting more references from their past mangas (like they always do..... *sigh*)

I don't know if this is the "downfall" of CLAMP, maybe? I hope not, for now it's just two chapters out I'm willing to give it more time, hoping they won't bring out more references from their previous work