Login to add items to your list, keep track of your progress, and rate series!
Description
Lazy, deadbeat manga author, Niki (pen name: Kaoruko Goutokuji), finally caught his big break! Except for one problem: his almost supernatural inability to do just about anything! But with a hot, elite business man, Shoji Tatsuhiko, as his childhood friend who constantly looks out for him, who can blame him? 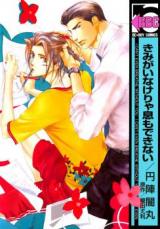 I liked
by Airendy
September 9th, 2014, 10:00am
Rating: 9.0  / 10.0
I loved this manga, but what particularly annoyed me in the beginning was the Niki, I thought that he had had some disease or something along the way that he agia.Mas after it began to show in a way that I liked him, he was starting to become independent means but still fluffy ... Already the-one year old Mitou Shouji, i hated when he quit the Niki and was even though but, I loved it when he saved.
Was this comment useful?  Yes

So-so
by varianthart
June 29th, 2012, 1:32am
Rating: N/A
I recently revisited this because it had been a long time since I originally read it. I differ from most of the comments here because I actually quite like niki. In the very beginning he was a bit much, but I think the backstory adds a bit of depth to him and I found myself relating to him. On the other hand, I dislike shouji in a lot of ways. The story starts off a bit annoyingly, then gets really good, then goes back off in to a direction I didn't like.
Spoiler (mouse over to view)
I don't mind that niki ended up being spoiled in the end, but I do mind that shouji started behaving forcefully when his original intention had been to let niki grow as a person. He became very cold without a very solid explanation, and it wasn't just an act. You don't stay by someone's side for eight years and then suddenly decide overnight that you're going to force yourself on them. Especially when it seems you never had any good reason to hold back from the start. Blah.
So, if it hadn't been for that and the story had gone in a different direction, it could have been a favorite of mine, but that's how it is.

Don't be fooled
by Sunahm
January 18th, 2012, 4:20am
Rating: 8.0  / 10.0
When I started reading this, I seriously almost stopped after the first chapter because I thought niki was SUCH an annoying and worthless whining leech. I don't know why I even read the second chapter, I think it was just sheer boredom...

But I really have to say, Niki gets WAY more bearable and I actually even started to like him! I usually can't stand the super weak and clingy character in any romance, yaoi or otherwise. But the whiny and clingy Niki starts to suck it up a little and show some effort, and the overly righteous shouji who always knows best digresses a little so that there is not such a huge disparity between them.

I am only halfway done, though, so more to come!

update (and possibly a little spoiler): I was hoping that in the end he would have shown more character development, but it seems like niki went straight back to square one -.- im glad it ended up being a "happy" ending anyway.

More....
by blueseeker
November 26th, 2011, 3:40pm
Rating: 9.0  / 10.0
I wish there was more of these characters, but i guess after getting their HEA, anything else would be too boring for some people. This story has the right balance of drama and cute, making it quite enjoyable.
Was this comment useful?  Yes

Love!
by Gattaca88
November 23rd, 2011, 6:46pm
Rating: 9.0  / 10.0
I highly recommend this manga. I have to say this, the seme and uke balance each other out so well. They really love each other and the title explains it all. Shoji and Niki can't live without each other.

Enjoyable with realistic elements
by Sasageru
May 26th, 2011, 5:12pm
Rating: 10.0  / 10.0
The title sums it up. I really found this to be enjoyable, but it does have a slow start and remains slow paced throughout. However, the characters and their dependancies on each other are what makes this such a nice read. The art is lovely, my only complaint is the panel ordering, sometimes its a little hard to follow which portion of text comes next, but otherwise its very well done. I also enjoyed that this had realistic elements to it, things that many manga's ignore or gloss over or rush through in order to push ahead more interesting points. In this, it keeps those points and uses them to the best advantage. I like that from a personal standing.
Was this comment useful?  Yes

Kimi ga Inakerya Ikimo Dekinai
by angelkurisutin
May 7th, 2011, 3:55am
Rating: 9.0  / 10.0
I found the relationship between Niki and Shouji very interesting. I don't think Niki's as weak as some would believe at first. He seems to have developed some anxiety issues from when he was younger. He gets upset over little things, is restless when Shouji isn't around, and has several nervous habits, such as biting his lips or scratching his neck because of the eczema until it bleeds. However, though he relies heavily on Shouji, he's not quick to accept the same type of help from any other. And even though it seems like he falls apart when Shouji's not around, he still remains dedicated to his career and even tells himself that it's not worth giving up life over. Not to mention he took risks and put his career on the line when the situation with Kanae happened. And he did so calmly, not despairingly.

Honestly, the character I'd more quickly criticize is Shouji. Shouji is the typical seme. He cares for Niki, then hurts Niki in a misguided attempt at making him happy. Then, despite how gently he's treated Niki all along, he's very possessive and rough during sex. I don't blame Niki for becoming depressed when the friend he's had since childhood, the friend who's taken care of him with a smile for years, suddenly abandons him without any explanation other than he's fed up. Niki's love for Shouji is sweet, but Shouji's love for Niki can be a bit confusing. But, overall, I liked this manga. I'm kind of the odd one out, and would read it for Niki. Perhaps he's a bit unrealistic (as are the majority of characters in manga), but his story is interesting.
Was this comment useful?  Yes

more than you would expect
by drifting
July 24th, 2010, 4:23am
Rating: 8.0  / 10.0
I dislike the weak, needy uke as much as any other person, and on the surface Niki appears to be just that. As the story progresses however, Niki kind of pushes past the stereotype. Don't get me wrong, he's still terribly weak and needy (especially for a 27-year-old!!) but...somewhere along the line, he becomes "real'. He's weak and needy, as well as childish and naive, because he has completely depended on his best friend Shouji for over a decade. In a way, it made sense. It's still an unrealistic situation, but less than you might expect. I found it fascinating to see how he and Shouji reacted when conflicts arose from their abnormal relationship. If you think this is just a sweet story, you need to reread this manga. After a few chapters, you get a deeper look at just how much Niki depends on Shouji. Like elisegrey mentioned, this manga has some serious, almost disturbing undertones.

I thought I would end up ditching the manga after the first chapter because it looked like the stereotypical "weak uke helplessly depending on the strong seme" situation, but I ended up being drawn into the characters and finished the story with relish. There is more under the surface here than you would expect. While this manga wasn't perfect, the combination of the neat art, the surprising uniqueness of the characters and the complexity of their relationship made me like it enough to give it a whopping 8 points. Cheers!

Can't Breath Without You Around~
by Disremembrance
October 8th, 2009, 11:06pm
Rating: N/A
Oh, how I wish I could feel like Niki and feel so happy continuously. Even though I was grinning from ear to ear just now after finishing up this story, I have to go back down to earth and be sane for sometime more. Aww and cuteee, sweet but the sadisticness just kind of makes me go... "What?" "Uh, okay then... I'm just gonna fast forward to the more loving part." It just isn't my thing, and it never will be.
Just go read and enjoy this series, kay?
Was this comment useful?  Yes