The protagonist, Boreum Park, is the daughter of a goddess and a womanizing taoist. Stolen from her mother at birth, she lives on earth with her father Chun Park. Her whereabouts are hidden from her mother by the protective charms set up around their house and she is always forbidden to leave them. When on the prowl for women one day, her casanova father comes across a man playing the flute. As they get to know each other he falls in love with the man. In order to stay close to the man he offers a marriage proposal for Boreum to marry the man's son. Thus stirring thing... More...
From Easy Going Scans:

The protagonist, Boreum Park, is the daughter of a goddess and a womanizing taoist. Stolen from her mother at birth, she lives on earth with her father Chun Park. Her whereabouts are hidden from her mother by the protective charms set up around their house and she is always forbidden to leave them. When on the prowl for women one day, her casanova father comes across a man playing the flute. As they get to know each other he falls in love with the man. In order to stay close to the man he offers a marriage proposal for Boreum to marry the man's son. Thus stirring things up in the heavens when her mother finally finds Boreum's whereabouts. Less... 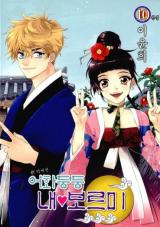 Dammit! Stop Friendzoning Good People!
by Gwynhafra
October 8th, 2015, 2:09am
Rating: 2.0  / 10.0
I have only been able to read the English and Chinese scans of this series so far, and unfortunately I can't read Korean so I can't tell what's going to happen, but from what I see, it's going towards the usual favourite trend of manhwa to throw in a heroine with a tragic or unfortunate background, a jackass main male lead, a wonderful yet unattainable secondary male lead and a love rival (secondary heroine). For this manhwa, the protagonist/heroine's father is a huge jerk who objectifies women and treats his daughter quite poorly.

Spoiler (mouse over to view)
He bangs and impregnates women just to get an heir, and when the child does not meet his expectation, he abandons them. Apparently he has knocked up a lot of them before he deflowered the protagonist's mother. He kidnapped his newborn daughter and trapped her in the same place for 16 years, left her constantly alone while he went to bang his random women, and did not keep his promise of teaching her Taoist arts.

Unfortunately, his inexperienced daughter ended up liking the same type of man her mother did too - A huge womaniser who judges women based on looks. Granted, he's the first man the protagonist had ever set eyes on, but I wonder how she could fall in love at first sight with his face when her father is already a pretty face himself, so she should have been desensitized.

Secondary male lead may not be a pretty boy type like the main male lead
Spoiler (mouse over to view)
who is an obvious uke if you read one of the scenes
, but he's stronger, way more useful and more compassionate towards the heroine. I'm not putting too much of my money on the heroine ever falling for him though. If I'm reading the pattern correctly, Heroine has to endure a one-sided love towards hubby who has all manner of women draped in his arms yet is strangely unaffected by STDs, then one day he'd have a change of character...er...I mean heart, and Heroine is obliged to forgive him and go back to him because that's what good, submissive wives are supposed to do.

The plus point of this manhwa is that the art is pretty clean, and the premise seems interesting. The downside, however, is that it can get very frustrating for some girls to read (even though it's obviously geared for shoujo). Putting aside probable intended values like forgiveness and humility, this manga also promotes vanity, judging a person by their face and love can be attained as long as one is pretty
Spoiler (mouse over to view)
well who am I kidding. It's a Korean manhwa so of course...
.

The way I see it...
Spoiler (mouse over to view)
protagonist is going to continue to angst over hubby, but will have her happy ending once she breaks the curse and turns all pretty again. Hubby is going to profess his love to her once he realises she and the golden haired girl are the same person. For the first half of the series, female lead will be the one putting in effort into saving their marriage. Male lead will only start to woo her when he realises secondary male lead sees his wife as a person and may actually risk getting her. Secondary male lead continues to get friendzoned, but will end up hooking up with secondary female lead.

If anyone has read and finished the Korean manhwa, please do tell me if this really is the direction this series is going. I'm not too sure I have the heart to continue this. Putting it in spoiler text is fine too.

main female ....basically women in this manga are treated as lowly.....which pissess me off//
by ajaykumaryadav
October 15th, 2014, 6:39am
Rating: 1.0  / 10.0
Male lead is stupid bastard......always call our heroine ugly and doesn't care for her...
Female lead is treated as shit in her new house..even though she doesn't know much about new environment.. ..
Basically she previously lived in mountains with her father...then also she never complain and always support our hero(bastard)
She is humiliated every second by anyone ...even though she never have illl feelings towards other.
Women are portrayed as object in this manga
Mangakar doesn't respect women...

enjoyable but...
by shaffia
June 13th, 2014, 1:42am
Rating: 6.5  / 10.0
well,, i think this story is enjoyable, furthermore there's so many comedy in it. I read it, and i came to like this story. But later, i found that the main character isn't the only focus in this story. I don't know what the writer think, but there's so many story about supporting character, and in some volumes, the story about the main character almost forgotten. On top of that, the male lead has lack attitude. It makes this story more gross. so, i can only give the 6.5 point for this story.

Funny!
by MissModern
February 9th, 2013, 10:11pm
Rating: 9.0  / 10.0
I can't wait for the whole series to come out.
Spoiler (mouse over to view)
I love the fact that the egotistical male lead is scared of the protagonist, who is supposed to be beautiful.
Was this comment useful?  Yes

Cant wait
by Snowytimes
October 13th, 2012, 6:28pm
Rating: 10.0  / 10.0
for the next chapter! It's so nice to read. I haven't read a manwha as good as this with an understandable plot for a really long time. Manwhas are usually hard to follow but this one is so clear cut and funny. The main character Boreum is so likeable and beautiful no matter what anyone says in the manga.
Was this comment useful?  Yes