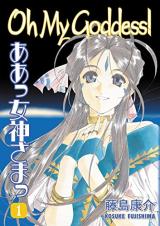 Funny charming and entertaining
by Shimaqan
May 25th, 2022, 4:19am
Rating: 9.5  / 10.0
A classic tale of generic mc get to live with a magic girl but with motorcycle and angels/demons
There is actual progression in the story with the years passing and his situation changing, the mg is very lovable and the other characters are entertaining, the 48 volume few away without a moment of boredom despite it not relying of drama to make it engaging.
Was this comment useful?  Yes

Simply charming
by ayaneninja
October 14th, 2020, 9:26pm
Rating: 10.0  / 10.0
As much as I love Chinese food, sometimes I wish I'd dial a wrong number and end up with a goddess as a best friend like Keiichi managed to do. That's how our story begins, a quiet college student wrong numbers his way into a magical adventure beyond his wildest dreams. The ranks of goddesses living in casa de Morisato quickly expand to include not just Belldandy, the selfless, kind goddess first class, but also the equally beautiful and hilarious scientist Urd, and the childish, robotics genius Skuld. The adventures, romance, motorcycle races and supernatural battles these characters find themselves in are some of the most enjoyment I've gotten turning the pages of a manga. Antics are had, feelings are conveyed and magic is made within the pages of Aa Megami-sama, it is one of the most charming and wholesome stories I have had the pleasure to experience.

Love this series.
by kari+
May 19th, 2015, 2:42pm
Rating: 10.0  / 10.0
I was really disappointed with the ending because...there....NO KISS?! It's there wedding!? After all these years...unless I miss a page. It's sad to see this series go and with an open ending. I was really hoping to see a cute ending, maybe a flash forward in time of them with a small kid maybe 4 year old and see Belldandy as a mother now. The ending was soo rush...but ah well...maybe in the future the artist will do a short ch for fun.

Love the art work and going back and rereading the old vols and seeing the old art. Love the story, love the art style, love the detail that put into the art. There so much I love about this manga. XD. Humor! Though Belldandy seem to get more durp near the very end...In the older volume it seem like she was more maturing and understanding how humans are and how the humans world works.
Was this comment useful?  Yes

Definition of Conclusion
by Silvergoku
March 24th, 2015, 6:06pm
Rating: 8.5  / 10.0
Really great story from beginning to end. The struggles of Keichi and Belldandy will melt you. My only gripe is for a 48 volume manga that has been going for 26 years, would be amazing if the conclusion was longer but the conclusion is there regardless.
Was this comment useful?  Yes

Best romntic anime manga
by Feridius
January 12th, 2015, 12:41am
Rating: 10.0  / 10.0
Love this manga!!!hope the author makes an extended version of the ending since i felt the end was a bit rushed!!!! Hope he makes a one shot special issue with what happened to all the characters in the future!!!lthe opening theme of season 1 of the anime was amazing!!!!!best opening theme ever!
Was this comment useful?  Yes

hurm
by TaoPaiPai
December 20th, 2014, 9:30am
Rating: 4.0  / 10.0
they mix
1940-values when it comes to woman
boring and sometimes long "motor" sport arcs
and the horrible yelling of main characters name
BELLDANDY
KEEEEEEEEEEEIICHI
x10/chapter
aka romance

the romance feels so silly
these ppl/gods are adults[10 000 years? who knows]
but they behave more like 7-8 year olds who hold hands, walk to school together and promise to love each other forever

Urd ... well she was the sexobject back when it started ...but then she is hardly in the series until around volume 25-30 something and then she is pretty much just in the background again
even the mangaka did not like this piece of shitcharacter

Skuld made this manga worth reading
since she is a kid[or 50 000 yo...?] she can get away with how she acts
and it fits
and...she is super cute lol
the mangaka seems to think so too since he made a new series with a skuld proxy as one of the MCs Paradise Residence
Was this comment useful?  Yes

awesome yet sad
by dremondtanic
June 7th, 2014, 4:23pm
Rating: 9.0  / 10.0
I havent been with this series as long as many many other who been reading from since the day it came out. But its still leaves a hole in the heart to see such good series end. Good series, good art(ofcourse to be expected from an illustrator for most of the tales series games) work, lovable characters. Not much to complain about, end was a little rush but still it ended right in my belief. I like how the ending leave the viewers to imagine whatever hardship they will deal with their life and ofcourse the fun.
Was this comment useful?  Yes

25 years!
by Otakkun
May 27th, 2014, 6:55am
Rating: N/A
Well, it's been 25 years of AMG, 25!!! That's really amazing. For me it's been somewhat closer to 15 years since I had access to the internet and started reading this through IRC channels. What an amazing ride it has been.
Was this comment useful?  Yes

I love it
by 3Ravens
September 2nd, 2010, 6:10am
Rating: N/A
I really love this It has really struck home for me as I can feel the depth of their love ,Bel has a personality similar to my wife's so I would love to see them get married ,if you marry a Goddess does that in effect make you a god? then they could live forever in heaven I've read all the mangas to date seen the anime series both seasons and the ova's And read the novel "First End" and
Was this comment useful?  Yes