Login to add items to your list, keep track of your progress, and rate series!
Description
Dr. Ginkaku's is a genius with a wide array of knowledge, but he's also a germaphobe who hates people and is very much a loner. However, he receives a great amount of support from his skilled and talented assistant, Aki Kayanoya. Even though Aki respects Dr. Ginkaku, he's troubled by how the doctor is always using him to test out the naughty machines he's invented that make him squeal in pleasure. Aki dreams of working with Dr. Ginkaku to help rebuild the city, a major research project the doctor abandoned long ago, but will it come true...!?

This is the deluxe complete edition which contain... More...
Dr. Ginkaku's is a genius with a wide array of knowledge, but he's also a germaphobe who hates people and is very much a loner. However, he receives a great amount of support from his skilled and talented assistant, Aki Kayanoya. Even though Aki respects Dr. Ginkaku, he's troubled by how the doctor is always using him to test out the naughty machines he's invented that make him squeal in pleasure. Aki dreams of working with Dr. Ginkaku to help rebuild the city, a major research project the doctor abandoned long ago, but will it come true...!?

This is the deluxe complete edition which contains rare color illustrations, previously unpublished chapters, and a newly written story!! Less... 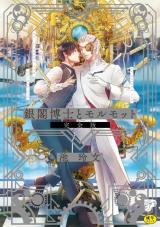 Smutty and over the top
by Namiya
April 18th, 2014, 4:05am
Rating: 7.0  / 10.0
Most mangaka sometimes just wanna draw something totally crazy, just for fun, so maybe this is Ike Reibun's turn?
It's a somewhat comedic piece, clearly focusing on the smut, with a minor futuristic plot.
Don't take it all too serious!
I liked that the doctor has OCD but makes sex toys, and the way from not being able to touch anyone or anything, to having sex!

If you're up for a ton of smut, including robot (dog) sex, then give it a shot! The art is gorgeous as usual and the smut is very well done!
Was this comment useful?  Yes

Different
by poisonousrose1517
November 3rd, 2012, 9:56pm
Rating: 7.0  / 10.0
it was an interesting story. There were parts that threw me off a little, Made me think "What the hell, What kind of sh*t is this" I think anyone who has read it, know what part i'm mainly talking about it. But the story was not bad, it was kind of weird, but it kept me interesting and of course the smut wasnt bad either. I'm not gonna not recommend it but i'm not gonna recommend it either. Just read it if it seems interesting to you.

Maybe it's the 'guinea pig' setting, and the off-putting reactions of (what's-his-name?) the uke.
Maybe it's the really twisted (not in a good way...) and cringeworthy relationship they have.
Maybe it's the pseudo 'character development' of the seme, that felt extremely obnoxious to me.

eh....
by Kinky-Chan
June 8th, 2012, 7:57am
Rating: 9.0  / 10.0
I've gotta say, this manga is a lil weird. But although it's weird, that's why it's interesting! I find the robot sex toy quite...creepy. I mean, it's like...I dunno how to explain, but just creepy. Other than that, the flow of the plot was alright. The characters are funny and nice. It's a nice read but keep in mind that most of Ike Reibun's works are hardcore themed! x3
Was this comment useful?  Yes

Stop exaggerating
by Serendipity_
May 31st, 2012, 3:25pm
Rating: 7.0  / 10.0
Oh come ooon, it wasn´t that bad. People should stop exaggerating. I´ve seen alot worse. If anything, it was a little disturbing ( the robo-dog thing ), but nothing else than that. It was a typical smut manga with, in my opinion, an original idea to a smut-plot or whatever you wanna call it.
I liked the manga, it was funny and I didn´t get annoyed with it´s smuttyness like I usually do with other manga in the same category.

Give it a chance, it isn´t THAT bad and it isn´t either THAT good.

intriguing
by cookieslov3
May 30th, 2012, 10:29am
Rating: 8.0  / 10.0
I had put off reading this manga for a long while cuz (judging from the cover) I thought it was another horrible attempt of a yaoi trying to add some 'substance' to the story by adding demons n dragons or machines n wat not (i.e. crimson spell)........ but apparently I have far underestimated Ike Reibun
truth to be told, it's arguable that this manga is another eccentric, way over the top, meaningless smut. But if you ignore a large portion of the sex scenes (esp the first few ones), you're left with quite a kickass sci-fi story. The concept of a crippled human society is certainly not new, but the author has managed to present it in an intriguing way, relevant (we can see references of pretty current issues), and if u look deep enough, there're some very interesting ideas and perspectives.
what put this story on a solid 8 for me though, is actually the art. I mean usually, when a yaoi tries to go down a fantasy or sci-fi route... it never turn out well, especially in an artistic sense but I have to admit that ike reibun nails this one. Most of her other works carry a more japanese oriented supernatural or historical feel, and to go from that to this, is an amazing feat! Any artists could draw well given the right amount of practice and attention to detail, but to be good across many genres require an absolute versatile imagination, if not, a vast amount of research! And it's not like she just threw in a few robots n call it a sci-fi, there's machines, gadgets, building structures and mechanisms for god sake!
with that said, like any other works by this author, this manga still gives me mixed feelings - I enjoyed it, but I certainly won't put it anywhere near my top favorites, I don't love it, but I certainly will remember it. Nonetheless, I'd recommend it to anyone with an open mind and wanna get away from the usual relationship/drama-centric yaois
oh and I almost forgot, there is a romantic story in this, for me, it just pales in comparison to the aforementioned aspects of the manga - so there's not much I can comment on, but I'll try anyway. The characters are very weird, but not too unrealistic by yaoi standard, there're more than one dimensions though im still not sure if that's good or bad. What I can say is that you do feel like rooting for them by the end even without being very emotionally attached
Was this comment useful?  Yes

wait a momento!
by juls91
May 27th, 2012, 8:13pm
Rating: N/A
i will go with lifeincircuit about the beastiality issue. This mangaka is known for very smutty scenes and yeah maybe the dog was a little... even she said it herself in the afterwords, but after all that sometimes hard to swallow images, theres a cute and funny story. I personally liked it, she has better titles but the art is always oh so good and is not that much of a deal the things you see here...

Of course if you are reading yaoi for the first time, or you are just starting to, its better to read other things for a while then come back, thats all.

Does not contain beastiality....
by varianthart
March 24th, 2012, 10:25pm
Rating: 8.0  / 10.0
This series is a bit smutty, yes, but not in a bad way at all. I've seen nothing disturbing in it at all, personally. The "beastiality" is a robot dog sex droid, which doesn't exactly count in my book. Ike reibun is quite good at bringing heart to things which could otherwise be really cracky. I think this is a good example of this as it is NOT just smut, there's actually a sweet and somewhat engaging story in there.
Was this comment useful?  Yes

So, brace yourself for a few chapters of eye gorging sex, afterwards it's all good.