Login to add items to your list, keep track of your progress, and rate series!
Description
From ADV:
Ahiru wishes to become a beautiful ballerina, but her two left feet always get in the way of her dreams. All of that changes when she is given a magical pendant and is suddenly transformed into Princess Tutu, a graceful dancer who is lighter than air. But not all is well for the crowned princess of pirouettes. The boy of her dreams has a broken heart, and Tutu must collect the shattered pieces to make her beloved Mytho whole again, before a darker dancer takes his heart away forever. 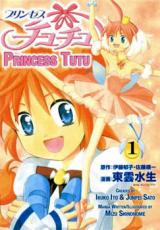 Meh
by SinisterTwist
May 14th, 2015, 11:10am
Rating: N/A
If I'd seen this before the anime, odds are I'd have liked this more. The artwork is OK and the story is fine, although the lack of a real conclusion kind of hurts it.
Spoiler (mouse over to view)
This is one of those "the story never ends" series. The bad guy is beaten, but you never get to see Ahiru land her prince. Instead she's still fighting it out with Ru for his attention. Never mind that the majority of us wanted to see her with the other guy...

This is OK, but it's definitely something you get at the library or buy from a friend. I'm fine with alternate endings to series and the Onegai Twins series is a great example of this since the anime and light novel ended differently, yet was still entertaining. This? This was just "meh".
Was this comment useful?  Yes

Why does this even exist?
by HoneyDippedLemons
February 5th, 2014, 3:31pm
Rating: 1.0  / 10.0
Who decided it's a good idea to create a manga based on an already existing anime, and than make the manga have a completely different storyline... (a bad one at that)
Princess Tutu is a great and unique anime that's extremely underrated and this stupid thing is just going to prevent even more people from watching it. Forget that this thing exists and go watch the anime (and don't be put off by the title and the art, I know it seems childish, but it's not and it has one of the most interesting storyline I have ever seen).

Anime before manga
by Death_By_Muffins
June 16th, 2013, 8:49pm
Rating: 3.0  / 10.0
The anime and manga are almost absurdly different in Princess Tutu. Unlike other Anime/manga pairs, the anime predates the manga, so if you're looking for the original source, go with the anime, not only because it was first but because it's better.

For some reason, almost the entire plot was changed for the manga. I have no idea why, but there is probably nothing the two have in common except for the character names.

I'll just come right out and say that I don't think you should read the manga if you're going to get into the anime. Yes, the manga's shorter, so if you're looking for a quick read, it works, but it doesn't register on the same emotional level as the anime does. Now, I could sit here and talk about the anime all day, but I won't. Please check it out for yourself, because it really is a little-known but beautifully done show that could use more fans.
Was this comment useful?  Yes

The difference
by samyd104
August 6th, 2012, 8:28am
Rating: 10.0  / 10.0
The anime and manga are different in their endings. I won't spoil it but I must say the ending of the manga was better because the people who deserved each other the most got together. (in my opinion). The anime was wonderful! It was my 2nd anime and still has a big place in my heart. It was very beautiful but the ending just crushed my heart. So be prepared... but a lot of people were fans o te couple at the end. So maybe you will be too. Give it a try though! Oh yes, the manga was a little off and weird for me but it was still Princess Tutu! So I read it anyway. It's a short read so it wouldn't hurt

Anime is way better
by mercury160
May 15th, 2012, 8:54am
Rating: 9.0  / 10.0
I actually watched the anime first before reading the manga and definitely, the quality of art, the storyline and romance is way better in the anime! The manga is much more straightforward while the anime plays upon possibilities, and really appeals with a darker atmosphere and emotions. Princess Tutu is definitely not your average fairytale story so definitely give it a chance!
Was this comment useful?  Yes

Anime vs Manga
by Twilight_Moon
October 19th, 2007, 2:11pm
Rating: 4.3  / 10.0
The anime was awesome, but the manga is different. I feel that they didn't develop the characters well enough in the manga. The manga takes away from the anime's more fairy tale-ish set up.

Tutu anime
by kelena93
March 1st, 2007, 5:05pm
Rating: N/A
I absolutely loved the anime version of this and the manga characters look funky (well Ive only seen the manga cover O.O;) well the anime is awesome so whoever hasnt seen it yet, I request you do so immediatly^^
Was this comment useful?  Yes