Login to add items to your list, keep track of your progress, and rate series!
Description
Kang Eun Ju loses both her house and job at the same time. When she discovers a working position at a mansion, she immediately grabs the chance! How will her life as a live-in caretaker in a mansion play out, with a rude employer she immediately butts heads with?

A story of unusual people in an unusual mansion! 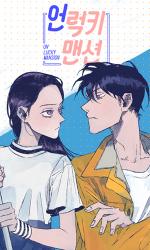 
Category Recommendations
Writer's Block of Romance
The President Is My Neighbor Cousin
Love Revolution (232)
My Friend's Dad
Are You Going to Eat?

Unique and Good
by BillianWonner
June 5th, 2022, 9:57pm
Rating: 9.0  / 10.0
For me is a must read if you like romance manhwas who actually got a nice storytelling and are not just copy-pasta from an niche, art is also pretty unique, not the most fine one but definitely has personality

Good characters and development aswell
Was this comment useful?  Yes

Super unique, aesthetic af, and funny as all hell
by donaldlau
August 25th, 2021, 6:36pm
Rating: 9.0  / 10.0
The story just invokes so many emotions it's absolutely hilarious at times, and sad at others. The character chemistry is off the charts, and the art style is super unique totally breaking from the typical mould. This webtoon is just absolutely amazing. It's short and sweet, and wraps up perfectly...with a bow on top.
Was this comment useful?  Yes

Definitely worth reading
by YuriTachikawa
November 30th, 2020, 5:40am
Rating: 10.0  / 10.0
This was a nice journey, seeing all the characters mature together. Contrary to others, I didn't feel like this was a slow burn, rather than that it felt really natural the way they fell in love. The storyline of the main FML was too realistic for a Josei (in a good way), since I was definitely able to sympathize with her. Though the main group of 6 people were each eccentric on their own, their dynamic works well together and I enjoyed their interactions. I actually like this kind of art style and the bits of humour fit well. The most note-worthy thing were the novel-like monologues, maybe it's the influence of having a writer as a ML. The ending was concluded well and satisfying, even with an unexpected element. Only thing that I have to criticize is the too heavy atmosphere introduced at the beginning, because it doesn't match the atmosphere that developed afterwards, but it's nothing too disturbing.

Sweet, Funny, and Realistic
by gloriousmangalover
March 24th, 2019, 6:24am
Rating: 8.0  / 10.0
- I absolutely ADORED the FMC in this one! Eun Ju is such fun! She’s brave, charming, funny, and refreshing. She’s the “cool savage” type, which makes her maturity in addressing issues all the more awesome!
- MMC was dark and mysterious, but served later as a cute and hilarious character. (: You’ll get why when you see his room. He’s absolutely hilarious, and I actually laughed out loud quite a few times when reading his words to others.
- The friendship bonds are strong with this one. Since it’s a boarding-house manhwa, the six people living inside are bound to be super close. It also sets a mood for romance later.
- A reviewer already said this, but, yeah, it’s a slow burn. But, like another reviewer said, it’s still worth it. The sweet moments between FMC and MMC were just so cute.
- Character development was smooth, but it did mostly happen in the later part of the series. I would say that they still retained most of the same characteristics, save for one character who changed completely, just that they become more fleshed out and a little more mature. This is especially obvious with the twins. I would say that Eun Ju started “growing up” as she dealt with work and love tribulations.
- Plot development was a little sluggish in the beginning. Some parts felt a little unnecessary, but then again, this is a slow burn, so it’s up to taste.
- It’s uniquely realistic. Just what I would expect of a josei. It’s down-to-earth, shows real-life struggles, and doesn’t use too many cliches, except for the “super dark backstory”, but the author is able to execute it well. The characters are mature enough, act their age when the time is right, and their communication with each other is so honest and open.
- Nice, unique art.

TL;DR: Such a change! I really, really loved the characters and their relationships. This manhwa had phenomenal art, a cute romance, a very slow burn that slowed down the plot and character development at some points, a well-executed plot with a few cliches, and an overall realistic, hilarious interpretation of life. Therefore, 8/10.

Slow burn
by CCheshire
December 13th, 2017, 1:16pm
Rating: 8.0  / 10.0
I picked up the series on a lark while I browsed recc'd and surprised how the artist is handling pacing which is nice since a lot of times it ends up being draggy for seasons upon seasons. So far we have the main defined couple who thankfully did not go with cats-and-dogs style of relationships so I do see potential for a realistic take on dating. The supporting characters have pretty active lives w/separate problems and do help each other out which is great to read.

Overall art is take-it-or-leave-it but I have to give the artist props for working on interesting bgs vs just throwing furniture around in 3D modeling programs. All the characters are recognizable and have distinct looks and quirks which is always fun vs everyone wearing the same shirt for every scene forever.

Spoiler (mouse over to view)
The one downside I would say that I hope the main story doesn't take too long for the awk confession scene since it's already in S2 and we've confirmed their thoughts already. Also, I want a nyan-themed room too...

Worth it
by hippie.rocks
October 16th, 2016, 1:07pm
Rating: 10.0  / 10.0
This webtoon is really interesting! The female lead is atypical; she stands up for herself and is hilariously vulgar. The art is also immensely unique, it's rough yet beautiful -- I haven't seen anything like it. Overall, highly enjoyed it and would recommend.
Was this comment useful?  Yes