Login to add items to your list, keep track of your progress, and rate series!
Description
Atsushi, an ex-chef, Torajirou, a high school baseball player, and Nakagawa, a famous ex-composer (all 3 losers in life) started up a Convenience Agency. Then, as if fate had a hand in it, Nakagawa once again crosses path with Takahashi, an incredibly talented young composer, when a job that needs Takahashi's expertise arises, rocking the three's otherwise quiet life towards a whole new direction. From making you laugh to moving you to tears, this is a story of love and peace, and the world as seen by losers. 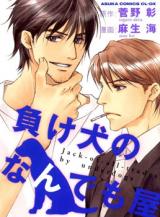 Asou Kai's talent is wasted.
by angelinarose5
March 25th, 2013, 11:57pm
Rating: N/A
I wanted to read this because the art was familiar as Asou Kai but I didn't notice that the author was someone different. Needless to say, as I read I became aware that Asou Kai did not write this. This was so all over the place it seemed like there were three different couples being focused and in the end no one's love life is resolved. Another thing that irked me was the vagueness. It's like there were so many deep conversations there isn't time to focus on go further into one without cutting back on the plot part of it. So in the end, everything is half assed.
Was this comment useful?  Yes

Very nice, but too short
by calstine
April 13th, 2011, 8:52am
Rating: 7.5  / 10.0
Makeinu no Nandemoya is definitely a rare gem in the cliche, plotless world of BL manga. It would have been wonderful if the mangaka had been granted enough time to reveal the characters' pasts in greater detail and follow the progress of their lives for a few more years.

The characters are interesting, and each one has a likeable, non-cliche personality. It was both moving and funny to see their defeatist attitudes towards life, and their constant denial of the reality of their situations is very believable - being something that almost anyone can relate to, at least a little. The morals behind the story are simple, but profound. And the silly "love conquers all" mantra was not flaunted here, not even once.

My favourite character by far is Nakagawa's first wife. She has an incredibly strong personality: the type you rarely see among female characters (in any demographic). I also found it quite touching that despite having left Nakagawa without hesitation, she still cares about him - though not in a romantic context. This gives her a three-dimensional quality that's quite an anomaly among women in BL. In fact, I'd have loved a few chapters focusing on her relationship with her girlfriend...but with this being a female-oriented manga, it's quite understandable why the mangaka wouldn't have wanted to take the risk.

All in all; a sweet, quick read. Despite the unrealised potential of the plot and its obviously truncated length, I'd recommend Makeinu no Nandemoya to anyone who thinks they're up for a meaningful, softcore shounen-ai with a humorous undertone.

Edit: It appears that this series actually has a sequel! Fingers crossed that it'll someday be scanlated, though there doesn't seem to be much hope of it right now.

Don't expect coupling!
by MightyMaeve
February 18th, 2011, 4:26am
Rating: 8.0  / 10.0
Wow! This was great: the pacing, the art, the dialogue, the plot, the characters--everything! Except it did't go anywhere... It was all just like a lead up to what was to come... and then it never came. But there is a 2-volume sequel (not licensed / scanlated), so it's hard to give a proper analysis.

Still, it's worth reading for some very poetic and wonderful life truisms. It's really just a moment-in-time where our four heroes learn a very important lesson together about living life.

Aw...
by Oriolidae
December 31st, 2010, 6:37pm
Rating: 6.0  / 10.0
I must confess, I did not read the genre description properly before I started to read this manga. And that came right back at me. I expected a yaoi story, but it was actually one of the softer shounen ai stories. I expected some smex, and therefore ... I was a teeny-bit disappointed.

Yes, the plot was great and politically correct and sweet and all. Yes, the art was NICE, and the dialogues fine. But I just can't get rid of this disappointment. For once, I actually caught myself thinking this had too much plot (while always complaining about most yaoi stories not having any plot, yes double-standards, I know). Hahaha.
Was this comment useful?  Yes