Login to add items to your list, keep track of your progress, and rate series!
Description
Hayasaka Yoshihito was so impressed by lawyer Mikami Haruhiko that he decides to work with him at his small law firm. But it's not quite what Hayasaka's expecting. With the sexually harrassing lawyer Katayama Masaki who doesn't seem to do anything, scary secretary Shingyouji Miho, and Mikami himself who isn't quite the way Hayasaka remembers, things are about to get interesting for an idealistic young lawyer! 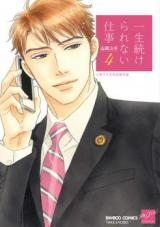 A little bit ruined
by landbound
May 28th, 2013, 1:38pm
Rating: N/A
I thought the story setup was really interesting, but as usual, the plot starts to degenerate once the pairings are "locked" and the characters start to become more defined by their roles and romance genre stereotypes. Which is unfortunate, because it tends to make the characters and story somewhat unenjoyable to me.

Although If 801Crazed does decide to do a write-up at some point, I'd be curious to see the differences.

Two Versions
by 801crazed
January 28th, 2013, 9:54pm
Rating: N/A
Just an FYI, there are two versions of this manga that were released in Japan. They each have somewhat different storylines.

The first version was published by Libre Shuppan in 2007. This is the first batch that Dangerous Pleasure scanlated (back in 2009). This version is shonen-ai.

The second version was published by Takeshobo in 2010. This is the second batch that Dangerous Pleasure scanlated (in 2012). This version is yaoi.

I only recently discovered this, so I might write a comparative description soon.

Edit: As neither version has been completed scanlated, I can't really compare them at this point. However, I will say that it seems the main course of events are more or less the same in both versions (so it's the details or how the main events come about that are a little different).

hmm
by maidenrose
December 1st, 2012, 1:58pm
Rating: 8.0  / 10.0
Characters display typical shojo character traits/behavior. Almost all the male characters are at least bi-curious too which is just an excuse for the author to add as much fan service-type situations as possible. Story wasn't very absorbing either imo.
Was this comment useful?  Yes

Wow!
by sOm1
December 17th, 2009, 3:19am
Rating: 9.3  / 10.0
This is amazing! Yamada Yugi is truly amazing.I agree with Misochan that the first 2 chapter is kinda boring.I wish there are yaoi scene for this though it is shounen ai.Highly reccomended!
Was this comment useful?  Yes

Interesting
by Misochan
May 30th, 2009, 7:45pm
Rating: N/A
Wow after chapter 3 it gets really interesting. The first 2 chapters were kind of boring. After reading chapter 3, I really want to know what happens next. Yamada Yugi is getting so good at her story telling. The plot is amazing since it's slowly unraveling the drama behind the whole story. Her artwork has improved so muchhh and all the characters look so pretty now. Ahhh I can't wait for the next chapter.
Was this comment useful?  Yes