Login to add items to your list, keep track of your progress, and rate series!
Description
With his phrase "don't you dare make girls cry," Makoto Tobita has failed his 30th confession, but that won't stop him. Promising to do anything for the girl who smiles at him, no matter what it is, what will happen now when the alien fighting - giant girl, Mana Eimiya, is in love with him? 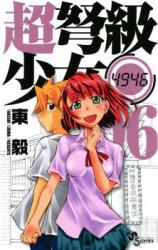 Note: You must be logged in to update information on this page.
Forum Posts Click to view the forum
someone continued scans
over 10 years ago

A cheesy jewel
by hurafloyd
January 1st, 2017, 10:37am
Rating: 10.0  / 10.0
As my comment title says but it is a cheesy well done lol, I can't believe I didn't evaluate it with its well deserved 10 before when I read it the first time. The fights may be considered weak or not well developed but this is not a battle manga.

Reasons for points (don't forget to add a "cheesy" in every line):

Yes!
by NomCakeMangaNom
September 14th, 2012, 4:17pm
Rating: 10.0  / 10.0
This was amazing. I completely didn't expect this story. I thought it would be just a typical boy-meets-girl, fall in love, kiss kiss etc, but no! First chapter was, sort of, but then the series became an explosion-filled-giant-monster-battle fest.

The manga had lots of potential at the start, and it lived up to it. Great read, 100% recommended.
Was this comment useful?  Yes

you can't just expect something huge event
at first scene right? it has direction and it is
not just a manga that will just go neutral.

and by the way I'm in a chapter where U.S.A
is joining the action. So better read it all before
you judge.
Was this comment useful?  Yes

Wow~!
by Yojilk
January 12th, 2010, 10:12pm
Rating: N/A
I'm not a big fan of sci-fi with comedy put together,but this one really got me going, loved how well detailed evreything is and how many references it makes too really old sci-fi series. Really deserves a 10/10! Thank you very much!
Was this comment useful?  Yes

Unlike the others
by Hell_Clues
October 16th, 2009, 4:17pm
Rating: N/A
I don´t think this has potential at all. The idea does, the idea is interesting. The execution is very close to boring. The guy is boring, and the girl is slightly less boring. If it had been some other manga ka... perhaps we´d get an interesting tale of a giant girl thats in love.

Instead thats not even an issue. how could they do that... they took the premise and gave it horric surgery Its hard to describe

without it sound even a little good but they took the interesting premise and threw it out the window. In order for it to be a bland and insulting girl that likes a guy but doesn´t feel worthy or some such. Believe me that its worst than it sounds. It doesn´t give itself time for the problems that would exist to really sink in or even manifest.
Was this comment useful?  Yes

Lots of potentail
by Jetpack
July 15th, 2009, 3:01am
Rating: N/A
after reading the first 3 chapters of this manga. i believe it has a lot of potentail, its pretty unoriginal but the characters are good and if they develop the characters and plot this will turn into a pretty good manga. 9/10
Was this comment useful?  Yes