Login to add items to your list, keep track of your progress, and rate series!
Description
'Ebisu-san and Hotei-san' is about two female office workers. Initially Hotei is not pleased when Ebisu is transferred to her branch, but gradually those feelings begin to change. 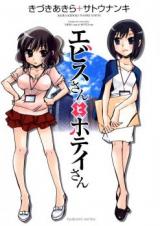 amazing short story
by riko_dewayne
November 28th, 2019, 4:34am
Rating: N/A
amazing how in a volume there is enough introduction of important characters, conflict, resulution, and some extra story. a good example how to make use of limited number of pages
Was this comment useful?  Yes

A great, short romance
by plotrobert
April 21st, 2016, 9:12am
Rating: 9.0  / 10.0
An absolutely adorable romance, in the end it's about two women finding each other and one of them kind of growing up in the process. I really just enjoy this title and recommend it strongly to everyone. It should only take you less than an hour to read anyhow.
Was this comment useful?  Yes

great development
by whitespade
August 22nd, 2014, 9:50pm
Rating: 8.3  / 10.0
i think their developing feeling is handled very well. we can their feeling turn from hate to love, and it is nice that both party discover each other almost at the same time without rushing. it may be a bit ambiguous, but the ending pretty much sealed the deal.
Was this comment useful?  Yes

Cute and short, but maybe a bit .... TOO ambiguous?
by Aadieu
May 13th, 2013, 1:12pm
Rating: 8.9  / 10.0
In the bonus ch 5.5, as an afterword, the authors pretty much come out and say that the magazine ordered 'yuri' and the editors hammered home the points "ambiguity, between friendship and love" + "no sex" (sweatdrops shown on authors at this juncture) into them, time and again...

...but, really, not even any hot'n'heavy making out between the main couple? Does contain
Spoiler (mouse over to view)
a peck on the cheek, an almost-kiss...and a full-on French kiss, forced and unexpected no less, BUT - coming from the Shrimp Mayo's SISTER, and only done to drive home the point that the yuri route *does* exist and is an option. NO real kissing between the MCs, though.

No flat-out confession, either (although an implied one does occur, and the receiving end does go "HUH?!" and blush like crazy). And they do end up
Spoiler (mouse over to view)
living together, they do get closer (the kid calls the lead the "aunt's ...friend"), and it lasts for a few years at least, as the bonus chapter shows.
Was this comment useful?  Yes

Excellent
by Verix
July 18th, 2012, 1:40am
Rating: 10.0  / 10.0
Easily one of the better shoujo ai I read, the build-up is excellent, the characters and their situations believable. Someone said it might give off a bit of a shoujo vibe.. might be true, didn't really matter though. It's a shame they left the ending with implications rather than a concrete ending. But it's all good, great read.
Was this comment useful?  Yes

Immensely rereadable
by Nouveauk
December 8th, 2011, 4:23pm
Rating: 10.0  / 10.0
I've found that I can reread this manga every couple months and it still gives me the same fuzzy feelings as it did when I first read it.

The pacing is excellent and the development in the plot and the characters' relationships is pleasantly structured. The problems with it are so minute that they aren't worth pointing out, especially in comparison with a lot of other short manga. Compared with other manga of similar style, it's great, and as a yuri manga it's brilliant (as an aside, I don't get why this site still differentiates between shoujo-ai and yuri; yuri would be the correct term for it anyway, and shoujo-ai actually carries connotations of pedophilia in Japan).

The end isn't particularly ambiguous at all, at least to me. The implication is very obvious.

It'd be a joy if the authors kept going with this somehow, but as it is it's already polished and in a good finished state. Give it a try.
Was this comment useful?  Yes

Wow. That was something
by Trimutius
December 6th, 2011, 1:45pm
Rating: 9.2  / 10.0
Even though it seems a bit too simple in the beginning I really liked the plot. And it is kinda cool. But it is really not your regular overly romantic manga. But because I don't really like stereotypical mangas the fresh ideas here were really interesting for me.

Spoiler (mouse over to view)
And you may say that here we have an example of lesbian parents, I really liked that.
Was this comment useful?  Yes

Nice
by akari_mizunashi
October 23rd, 2011, 12:21pm
Rating: 7.0  / 10.0
I really liked Kizuki Akira's short story Needles and Oranges and so was interested when I found out Lililicious would be translating another one of his/her works, although I was a little wary about the commercial-sounding "love between OLs" plot. Ebisu-san to Hotei-san is definitely many times more commercial than the indie-esque Needles and Oranges, and the hulking breasts sported by most of the characters are a distraction, but Kizuki's talent in storytelling is still evident here.
Was this comment useful?  Yes

Great!
by roxslide
September 6th, 2011, 9:58pm
Rating: N/A
This manga's put together really well, more so than a lot of BL and shoujo than I've read... needless to say that makes it a pretty decent GL. I think this was one of the most poignant and naturally progressing depictions of bad-impressions turned couple that I've read. I liked how neither of the characters were flawless, honest goody two shoes, because despite all the press on them, most people aren't. I did wish that their story went on a little further, rather then ending with just an implication. I really liked this couple, hearing a little more of their story would have been nice.

Typical style of Akira Kizuki
by Communist_Rob
September 5th, 2011, 4:39pm
Rating: 10.0  / 10.0
This is something a little more sophisticated than the average yuri romance story in that it's more reflective on reality than what's idealistic.

There's no milestone confession or heavy drama scene and because of that, readers have to draw their own conclusions from the interactions between the two characters. Though the ending does pretty much clear all ambiguity.

And even though the author makes it pretty obvious, most people are not used to thinking when reading romance: they prefer to be spoon-fed by overt confessions that are quintessential of the shoujo genre.

This is not for everyone, but for those who like josei and want a change of pace or something more casual, give it a try. There's only 5 chapters after all.