Login to add items to your list, keep track of your progress, and rate series!
Description
Nagisa's good friend, Igarashi Taiga, is the popular guy at their university. After being compared to Taiga as a lover, Nagisa keeps wondering and questions Taiga, who demonstrates his skills with a hot kiss... What will come after that? 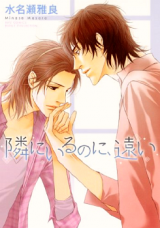 Rushed
by sallyen
May 12th, 2013, 3:51pm
Rating: 6.0  / 10.0
It moved too fast and too rushed. Don't expect any real character development. They don't really seem true to their characters either; so you can help to be thrown off a bit. Also too many characters considering how unimportant (and a bit uninteresting too) they really were.

Overall: A shallow story. Just an enjoyable story. Something to pass time with!
I am being a bit harsh, but people were raving about it and I don't understand why :-)
Was this comment useful?  Yes

Okay
by takatori
December 7th, 2012, 10:22am
Rating: N/A
Predictable, I didn't find anything special in this manga... Nevertheless it was still a fun read. I didn't really like the seme that much. It wasn't the art or the appearance, I just didn't like the personality or his name...Especially when Nagisa kept saying his name so much. The dramatic "I'm breaking up with you." and the act of a crazy woman tying up Taiga in the chair was rushed and wasn't really the tear jerker I was looking for. It was rather ridiculous really, not realistic in the slightest.The only reason I'm not giving it a really bad rating is because of the art.
Was this comment useful?  Yes

the story got potential..but not enough space
by kvicka
November 8th, 2012, 11:47am
Rating: 8.9  / 10.0
I have to lower rating because...it would be good story...BUT... it should be at least in three/four volumes or more...not everything in one volume... everything was going too fast...there wasn't time for much emotions and stuff... I believe the story got a big potential...but unfortunately didn't get enough space...
Was this comment useful?  Yes

Entertaining read!
by Namiya
September 25th, 2012, 12:17pm
Rating: 8.0  / 10.0
There's a ton of stories with a similar plot, two best friends where one has a crush on the other, plus one of them is super popular and all that... it's a yaoi cliche.
But I still enjoyed this story, the characters, the art...there was an unexpected twist... it was all pretty good! I really liked Taiga and Nagisa was a good guy too.
I personally would prefer such stories, where the best friend confesses, to be more of a character thing, you know. That the character has an inner struggle, worries, fears, and honestly thinks everything over because being confessed to by your best friend who's the same sex when you never thought about him romantically before isn't usually something you get be over and done with in a day or two.
So I felt the manga lacking there, because Nagisa was shocked at first, but his shock turned into love very fast and it seemed like only a few days later, he was already jealous and possessive of Taiga.
I wouldn't call the manga bad just because of that though, so I'd still recommend it as a light and fluffy read, as long as you aren't completely sick of yaoi cliches!
Was this comment useful?  Yes

Rushed
by mashimaro12345
September 21st, 2012, 12:51am
Rating: 7.0  / 10.0
It was a little bit weird that Nagisa accepted Taiga so easily, since he has been straight all along.
And Taiga was too clingy for my liking, and he seemed unable to take charge when it was needed.
Nagisa's the one who has to take initiative, and Taiga ended up going along with him in my point of view.
Was this comment useful?  Yes

A good and simple read...
by Natsumijojo
July 14th, 2012, 1:14am
Rating: 8.0  / 10.0
This manga wasn't bad, the story plot wasn't something unique actually we see it a lot in friends becoming lovers types of yaois. But it was still very enjoyable, also I find it interesting how the mangaka had them date before Nagisa was completely in love with Taiga (although the was a HUGE hint that he loved Taiga.) However found the mangaka wasn't able to completely developed the characters correctly, I mean Taiga had a fierce aura like a wolf at first, but as soon as he started to date Nagisa he became a little pup. Then we have Nagisa, he went from a happy go lucky uke, to this erotic, possessive, dominating uke! (I like how their personalities turned out, but they should of been like that in the first place!)
Was this comment useful?  Yes

Great~
by Kinky-Chan
June 30th, 2012, 8:11am
Rating: 10.0  / 10.0
It was a good read! But somehow the plot seems short...but at least the story is well written. Wow, that woman is so terrible and nasty. It's kinda like making us, the real women feel like as if we're that horrible and evil. Man, Nagisa should have gave her a punch real hard on the face. Anyway, the story itself is smooth and the characters are quite interesting although I think there isn't much development with the characters. Still, it's recommendable!
Was this comment useful?  Yes

Anyway ,it's really a good story, but things mive a littl etoo fast ? it would have been better with a little more of chapiter !
Was this comment useful?  Yes

Pretty common
by kurosu_yuuki
March 18th, 2012, 8:30pm
Rating: 6.0  / 10.0
I had reviewed this previously a few years back and was so harsh (also, the story hadn't been finished then), but I don't think that way anymore.
I pretty much hated it back then, but now I wouldn't say it's the most original in the world, but it's not bad, it's cute. Pretty common storyline and a bit too simple, because everything fell into place with almost no conflict, too easily.
To make this better, I wish it started sooner, showing more of Taiga's unrequited love and tactics, then a few years went by and it evolved from there, because I'm not too happy about how quickly Nagisa return his feelings. I'm also not a fan of fluff, angst is my cup of tea, but this was an enjoyable story to pass the time.
Taiga was my type in the beginning: cold, pushy, very seme. But when he got softer, it seemed like a big puppy.
The conflict was a bit laughable and it could've been finished before then.
Oh, something I did like was that the friends helped out, which was a nice touch.
Overall, not bad, just a quick read 🙂