Login to add items to your list, keep track of your progress, and rate series!
Description
College student Haneji Kaoru is surprised when popular actor Aragaki Jin appears in his workplace. They were high school friends, but unable to cope with his deepening feelings for the playboy, Haneji cut all ties after graduation. But now that Aragaki has found him, he has no intention of letting Haneji go... 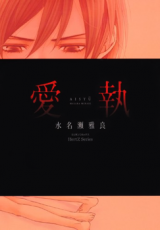 Doesn't Deserve So High an Average
by Hobostarr
December 30th, 2019, 2:45am
Rating: N/A
It's not the worst thing out there but definitely not in the 7+ range. More like a 5/10 MAX.
Positives: The art isn't god-tier, but it doesn't make me want to rip out my eyes.

Issues:
-Characters aren't super likeable. Now, truth be told this story doesn't have many chapters, but the characters still fall flat. The uke is alright, but the seme is the problem. Very selfish and posessive character. He sort of addresses the error of his ways a bit, but it's not enough to make him likeable or for me to want to root for the pairing.

-Problematic tropes abound. The first chapter has....dub-con...at best... After repeated requests for the seme to stop what he is doing, he responds with quality quotes such as "if you don't like it, then you'd fight back harder." Yikes. A few panels later, the uke thinks to himself he doesn't hate what's happening, and that the seme is right, buuut still kinda squick behavior very reminiscent of the rape-turns-to-love trope yaoi can't seem to rid itself of.
-As said before, on top of not understanding consent, the seme displays just toxic behavior like posessiveness, over-aggression, etc, and blackmails the uke into staying in the relationship and moving in with him by taking photos of him post-dub-con-smut and threatening to send them to his family (something that is never addressed ever again nor is the seme really called out on it.) I spent the story more wanting the uke to just get away from this man, more than actually root for the relationship. Even one of the characters in the story remarked the seme wasn't good for the uke, which I completely agree.
-The seme is pretty slutty. This one isn't as big an issue for me as the others, but he does fall into the promiscuous/cheating bisexual trope. Aside from being with the main character he also has numerous sexual relations with women. This part could just be a character flaw linked to his selfishness/carelessness for others, so it's not my biggest issue.

So, conclusions: don't read it unless you enjoy bad writing/ need a reference for toxic characters. This could have been an interesting story if the writer had gone a difference direction. Many of the flaws in this manga could have worked in its favor had the writer not tried to pass this story off as a romantic/ even moderately healthy romance. This relationship has red-flags abound which no newfound self-awareness in the seme can really fix. Some of his behavior persists even until the last chapter. If the genuinely abusive/toxic relationship aspects were taken more seriously/given more weight, and the story didn't try to make what was unhealthy healthy, it could have been a decent story about a toxic pairing. Some characters don't need to be redeemed like what they tried to do with the seme to make everything a-ok in the end.
Was this comment useful?  Yes

disgusting
by YanaseRyoko
November 22nd, 2018, 9:33pm
Rating: 1.0  / 10.0
seriously, this was too much to handle.
the only normal and smart character was the manager, I was shipping him with that stupid uke.
I love strongers ukes with self esteem and this isn't for me.
and here I wonder why this has a high rating

Lol
by Himeowchama
March 28th, 2017, 7:53am
Rating: 6.0  / 10.0
Okay lemme set this straight: at first I didn't like it and made up my mind that whatever would happen wouldn't change my opinion of this manga (hated it honestly, no excuse for seme's infidelity and uke's stupidity) bUT WHEN THE SEME CRIED, MY HESRT BROKE!!!!! HE WAS AN INNOCENT KID TO THE WORLD OF LOVE LOL. HE TOOK THINGS FOR GRANTED, AND WHEN HE LOST THE PERSON HE MOST TREASURED, HE REALIZED THR BITTERNESS OF LOVE!!! And maybe he's kinda tsundere or an egoist, not telling what he really feels until the uke would tell him lol (like I love you AND you're my first love lol)
so for the forgivable plot bc of the twist, I'll give this a 6 lol. (From 1 to 6, that's kinda high of a hurdle to jump lol)
Was this comment useful?  Yes

MasterCel has something to say!
by MasterCel
January 3rd, 2017, 7:16pm
Rating: 5.0  / 10.0
Aishuu isn't a typical BL manga. I'm not saying that it's the unique type of manga that I would definitely remember for the rest of my life, but I actually think that it's the opposite. Unfortunately, the plot and story doesn't hold any logical meaning whatsoever. It looks like Minase Masara is simply experimenting with different types of scenarios. Aragaki doesn't hold the ideal character of a seme. He seems too naive and immature to hold that part. Kaoru on the hand acted in a well-manner, but I find him somewhat wishy washy. I guess in the end I thought that the story felt rushed and needed more developing. However, put aside the fact that it felt a little plain, I would have to say that i enjoyed the author's art style. Therefore, I would like to explore more into Minase Masara's work and I'm hopeful to find something that I'll be fond of.
Was this comment useful?  Yes

dense seme....
by Maria-Ayako
September 13th, 2015, 4:23am
Rating: 8.0  / 10.0
This art style isnt bad, but i dun like that females have the same face as males.
Well it was kinda interesting, kinda slow and kinda baka. I mean Aragaki was a playboy but dense, so dense as if he never even heard the world LOVE.....huuuf.....and after realising he became so different!!!! Like he awakened xDD so he became so sweet and cute!!~
Was this comment useful?  Yes

Everyone is overly dramatic, but not nearly the worst I've seen.

Not too bad, though I probably won't read it again.
Was this comment useful?  Yes

Oh my!
by Namiya
September 24th, 2012, 12:16pm
Rating: 10.0  / 10.0
I went into this expecting another one of those normal boy loves idol or vice versa stories but it actually surprised me with how sweet it was!
The story is absolutely captivating, the characters are interesting... I loved both the main characters and especially liked how Jin was just so clueless about everything... that he didn't just fool around with women cause he was a jerk or anything, he just didn't know any better.
I found that to be very refreshing.

I'd recommend this to everyone, it's really worth the read!
Was this comment useful?  Yes

This story doesn't differ from her other works, so ofc I love it.

Nice!
by Kinky-Chan
June 8th, 2012, 7:02am
Rating: 10.0  / 10.0
I've always loved Minase Masara's works. I almost read finished all her works, except the ones that are currently being scanlated. Now this story kinda reminds me of...Lover's position. Both of the uke resembles each other a lot. But the seme in this story is OVERLY selfish and I'm pretty disgusted with his dumb "flirting" acts with other women. Like, come on! Keep it in your pants yo! He sleeps with the uke, yet he sleeps with other girls. I feel sorry for Kaoru! He deserves a better guy. Really! Why love a badass guy like Aragaki?! But then, there isn't any other guys that Minase sensei drew in this story. It kinda like only focuses on the both of them.
But really, Aragaki is so selfish like a spoiled brat. He doesn't love Kaoru, yet he wants him to stay close to him. He gets pissed off because Kaoru disappears?! Kaoru should just give him a slap when he said that he won't feel lonely if Kaoru is not there. The hell? But anyway, I still like how Minase sensei drew the work. :>
Was this comment useful?  Yes