Login to add items to your list, keep track of your progress, and rate series!
Description
When he was younger, Takeshi promised to come to the aid of a "cute girl" in his calligraphy class that he had a crush on. Since then he has never strayed from Mako's side. Mako sees Takeshi as "cute as a stupid dog". Add in third wheel friend Honda, along with many other typical plots for a school romance and you have a story. 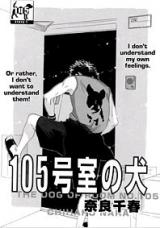 At first, I didn't like it. I remember when I first tried reading it but then just dropped it as that. I wasn't interested in reading some piece of work which contained masturbation. Now, when I read the manga actually, I still think the amount of time Takeshi fapped is unbearable. I like this book, so I'm fapping! I like this bird's color, so I'm fapping!Like seriously, dude, get a hold of your sexual fantasies. It's already too much. Fapping is needed, but not this amount of fapping is appreciated. But not like it's interfering with the story though. So I'm perfectly okay with this. Takeshi can fap as much as he wants, I'm no one to stop him.

The artwork seemed to be... somewhat familiar. Perhaps I've read the same author's works? But the name doesn't really seem familiar. I don't know. I'm probably having some kind of déjà vu. I wasn't used to this art though, so it took time for me to get used to it.

I have to say, it's not that interesting like the others are saying. The comments make you feel it's nice and exceptional. But when I read it, it's normal as other mangas in this genre and has nothing "exceptional". Maybe it's only me who has read so many mangas like this? Probably. For me, it's overrated. Maybe my view of this will change as it updates? But till then, it's going to be the same. Not like I'm hating on it though, I still kind of loved it. But it's just a bit uninteresting. Not going to recommend this to anyone.

Okay.. I just scrolled through the raws.. I didn't understand anything since I don't understand Japanese whatsoever. I was just laughing at that part where Mako bit Takeshi's nipple that hard that he he started to bleed? I liked that part though. I think I really need to consider learning Japanese. It's gonna save me from lots of trouble.

Ongoing...For 10 Years
by kira6
March 1st, 2015, 3:36am
Rating: 10.0  / 10.0
SEXUAL TENSION YES YES YES SOOOOO MUCH SEXUAL TENSION---I couldn't just read it once. I was even compelled to search for the raws. The only problem with this manga is that it's still labeled as ongoing...but it's been 10 years. The 6 chapters are all online (last 3 are raws), but nothing is resolved. I really doubt this series will ever be finished. The sexual tension in the first 3 translated chapters are still worth reading though.

Nah, it retains its seriousness
by MangomyTango
January 10th, 2013, 12:45pm
Rating: 10.0  / 10.0
Whoever said that it turned into a humor manga in ch4 is wrong, lol it gets pretty serious and the sexual tension just explodes later on and well, Mako becomes a BEAST! even hurting Takeshi lol but overall this manga is a mix of drama and humor and the balance is just right. Really loving it so far and looking forward to more!
Was this comment useful?  Yes

hilarious!
by jazzybaby
August 20th, 2012, 11:02am
Rating: 9.0  / 10.0
Of course, the plot itself is a little cliche for yaoi manga BUT the way it's presented by Nara Chiharu is just brilliant! ;D
I love her artwork because the guys, especially Takeshi and Honda, actually look like guys! Also, the whole manga was very entertaining to read and I would catch myself laughing out loud at naive Takeshi's hilarious facial expressions and reactions to certain events in the story. I thoroughly enjoyed reading this one. It has easily made it's way to the top 10 yaoi mangas I've ever read!!

Others include: Endless World by Jaryuu Dokuro, Boku no Shiru Anata no Hanashi by Suzuki Tsuta, Double Mints by Nakamura Asumiko, Sex Pistols by Kotobuki Tarako, The Cornered Mouse Dreams of Cheese by Mizushiro Setona,You & Me Etc by Kyuugou, Kuma to Interi by Basso, Devil x Devil by Sawauchi Sachiyo and After 9 Hours by Yoneda Kou (:

still love it.
by seito.kouji76
July 5th, 2012, 3:34pm
Rating: N/A
I love this manga. But too bad, in chapters 4, the story itself turn out into a humor manga. I'll give it 8 to 9 point though, if only this manga still have its seriousness like the first three chapters 8D Still, this manga is cute.
Was this comment useful?  Yes

good stuff
by altilye
November 27th, 2011, 10:10am
Rating: N/A
Chapter starts out brilliantly, with a touch of mature realism and a well translated sense of humor. Becomes a bit corny towards the middle and end, with the appearance of too artificially inserted foil Honda. Still, awesome series, dying to read the next chapter.