Login to add items to your list, keep track of your progress, and rate series!
Description
A graveyard in contemporary Israel has an unlikely visitor. The elderly gentleman from Japan, a former news correspondent, lays a bouquet of flowers at the tomb of one Adolf Kamil. For he remembers the tale of three Adolfs: Kamil, a Jew who grew up in Kobe, Japan, the son of a baker; Kaufmann, only child of a German consul stationed at that port city and his Japanese wife; and the Fuhrer with whom the Far Eastern nation made common cause. 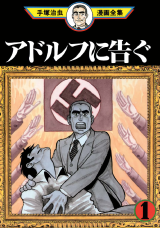 As a novice in this area, I'm surprised to see some commenters who shamed this story just because of rape being thrown at beginning of the story and such without considering the reality part of this whole thing which I'll elaborate later here. And of course, how old the art looked like, dude it's 1980s for goodness sake.

First of all. Plot wise, it's really tight I couldn't think of any plot holes to miss for, it's pretty well written and some did happen according to the history.

Secondly, character development. Everyone connected to each other at some point. Had their own stories, as usual, I love how Tezuka told the tales of these characters while still being relevant to the plot esp. Toge and three Adolfs had me interested but Kaufmann one got my most attention for the reason because of him slowly turning to be the anti-hero of this tale as a Nazi and a sociopath, I simply was in awe for him. Hitler, second, he himself and in Kaufmann's eyes. And last was Jewish Adolf, Kamil, but damn. Everyone was strong on their own. And certainly, everything happened for some reasons.

War, love, suicide, and all that stuff to have mixed feelings for. Because rape, loot, and basically all forms of worst things were indeed present in wartime and its post war. PTSD, psychopathology and ASPD, and so on. You couldn't sugarcoat this, could you?

Summer Olympic 1936, WW2, beef btwn Japan-China, Israel-Palestine ongoing war in 1973, Lebanese wars in 1970s-1980s involving long lost enemy between two Adolfs. This certainly got me seeing esp. Adolf Hitler, Israel-Palestine in a different light now. I mean, look, war clearly changed everything both in good and bad reasons. Guilt and anxiety ridden military officers esp. Kauffman himself, driving them to the madness while justifying everything as the way to deal with their own pain. That it's order, not their own intentions nor their responsibility while sometimes it's all mixed and blurry like Lampe and Kauffman did, self explanatory of war genre which Tezuka had done his best in his Japanese view, crystal clear because there are so many at stakes here to mess for but he certainly didn't mess it up, not even in slightest.

In short, I couldn't sleep after done reading this whole heavy story because of so many thoughts running thru my brain and hence I needed some time to collect myself to write what I needed to say here. I've never had such strong feelings for so called war genre, not that I didn't expect it but still.

Aesthetic wise, I guess it's typical 1980s drawing even if it's past oriented which was pretty interesting. As for panel, it's not that hard to follow except if it's on Mangarock, whose rules were to read from left to right but in reality it's the other way around because otherwise it wouldn't make sense, as it should be.

That's all for now, I think.

masterful storytelling. so clear. so gripping.
by Lanthimum
May 18th, 2019, 6:42pm
Rating: N/A
This is from the 1983, yet the storytelling so crystal clear. I struggle to follow many manga, especially older ones, but this is such a clean breezy joy to read through.
Was this comment useful?  Yes

Different to my expectations
by luzzz
October 27th, 2009, 12:17am
Rating: N/A
I enjoyed this manga (to an extent), even though I failed to finish it. However, the storytelling method by the middle of volume 2 did it for me. It's not that it's bad but I personally don't like the plotline - how every single character is conveniently interconnected in some way or other - not to mention that a few characters irked me a great deal. Second is Tezuka's art. It may be legendary but his cartoon style really detracts from the intended atmosphere of a lot of his series (see: "Metropolis" - another manga I couldn't finish). I think I came in with different expectations. I heard wonderful reviews of Tezuka's works but they're completely different to what I imagined them to be

In any case, even among Tezuka's works, Adolf is really something special. The characters are all incredibly rich, and the historical background that they are placed against is thoroughly developed. The story, thanks to his years of master-crafting, is well-paced, and rarely is a panel wasted or misused.

What decreases the rating are a couple of factors- the first is falling into a few storytelling cliches, the second is a lack of detail in the art (which is one of the few general complaints I have with Tezuka- he works in a cartoony fashion, which is fine, but he doesn't complete the atmosphere), and the third concerns some minor historical inaccuracies that I will refrain from ranting about.

Regardless, this is one all fans of historical manga should read- it's a good example of how a time period, even with incorrect aspects, can be turned into a powerful drama in this medium.
Was this comment useful?  Yes