Login to add items to your list, keep track of your progress, and rate series!
Description
From Adachi's Universe:

Slow Step follow the adventures of school girl Minatsu as she looks for a man and tries to stay on top at school. She's got the school bully to worry about, two potential suitors, a pervert for a PE teacher, and a gang of criminals in hot pursuit. 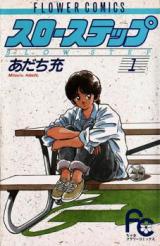 The absolute worst Adachi manga I've read
by Lucifel
April 19th, 2017, 9:25am
Rating: 4.0  / 10.0
If you've read Adachi before you know what you're getting in to. He's a hack who just does the same thing over but there's some value in it. Slow Step is the first time I've been appalled by how lazy he actually can be.
Was this comment useful?  Yes

Falls somewhat short.
by MondSemmel
August 25th, 2014, 8:44am
Rating: 7.5  / 10.0
I love many of Adachi's mangas, and Slow Step has quite a lot to offer - tons of fourth-wall breaking, lots of amusing characters, many overturned stereotypes etc. Here, Minatsu's disguise was a highlight.

But the overall result is ultimately rather unsatisfying since the final volume feels, if not axed, then at least rushed. For instance, the girl who vied for the teacher's affections is suddenly paired off with another; all sports subplots end in rather unsatisfying ways; and the final chapter is even more open-ended than typical for Adachi.

Still, up to roughly that final volume there's a lot to like. Just don't expect the brilliance of Cross Game. On the upside, Adachi has come a long way since 1987.
Was this comment useful?  Yes

that pic...
by Chinmay
September 20th, 2013, 11:04am
Rating: N/A
I don't know what is it about that peace sign on that picture and that lean, but it somehow pisses me off every time. Not dissing the work, because ADACHI Mitsuru's manga are great read many of them. Just that picture. and the odd thing is every time its released I click on it to look at the picture again to figure out why I don't like that picture, then I see it and again I see that pose with that peace sign and I get mad again lol wtf.
Was this comment useful?  Yes

totally love it
by myyinfatuation
April 22nd, 2013, 9:29pm
Rating: 8.8  / 10.0
Its an Adachi work so if your familiar with him you will like this, especially as a female reader. Anyway I love his humour, and its a shoujo, so I am in love with this manga. Read what was scanlated twice and I really wish someone out there finished translating this. that said it's not something that can be really enjoyed if you read it a chapter at a time - better to read it all in one go, at least I think so

Edit: the ending isn't bad by any means but it wasn't satisfying either...

interesting not sastisfying
by tumy102
May 19th, 2009, 7:12am
Rating: N/A
Typical Adachi sensei's style so I guess you have a picture of what to expect, adorable characters with fancy talent but clumsy personality, humor and sarcasm walk hand in hand, and plot twists being dropped here and there with a very calm and somewhat slow pace of developing, secretive hints and half open wrap up ,blah blah... the usual stuff.
However I have to say this is not his best works and I bet lots of people agree with me, its pace was fairly slow then somehow rush to the end, could have been better if the characters were polished a bit more.
Took me few years to get the whole series since it;s been drop by a few scan-trans group and reading sensei's raw works without knowing Japanese is purely a crime.I managed to end my agony of wondering who in hell is she gonna chose.... I would have liked it better other way but this one is okay comparing to H2's.
All in all, good read. I would give it a 5 out of 10 among sensei's works and 7-8/10 among normal rating.
Was this comment useful?  Yes

Its pretty good
by Hell_Clues
March 21st, 2009, 11:17pm
Rating: N/A
From the 3 volumes I've read, its probably going to be better than Katsu. But its not really about softball, which becomes a running gag. And the guy added boxing again. Here he continues his trend of having completely one sided, ubermensch.

It's not so bad since all 3 guys/interests are pretty cool talented dudes. and the teacher already has a hook up. Still, the idea that the best boxer gets the girl makes me cringe a little. Its highly mediated by the fact that they actually spend a lot of time together outside the ring in this. And that she has only spent a little less time with the other major guy character.

Aside from that its typical adachi humour and story development. He sets up pretty funny situations and makes fun of himself if they aren't original.
Was this comment useful?  Yes