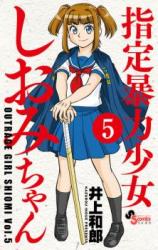 Identity Crisis
by MondSemmel
April 6th, 2019, 12:15pm
Rating: 7.5  / 10.0
Inoue Kazurou has written several comedy manga with wonderfully absurd premises, and Outrage Girl Shiomi continues that trend. Instead of the by now typical isekai story where an old person is reborn, only Shiomi's outer appearance changes. Much of the comedy is based on the absurd identity crisis (s)he experiences as a result.

I enjoyed the premise, though the story is episodic and some chapters felt a bit random. The cast of side characters is quirky but similarly somewhat random.

A criticism: This comedy about yakuza gang warfare can't quite square the former with the gravity of the latter. For instance, early on, there's a classic movie-style scene where a yakuza shoots another in cold blood. In contrast, Shiomi, the mob boss, refuses to kill the ones gunning for his life - which might be expected from a shounen manga, but doesn't fit his (her) character at all.
In other words, the storytelling suffers from an identity crisis that mirrors Shiomi's. I suspect this would've been a better story if the humor had been darker, without some of the concessions to the shounen genre.

Finally, the story ends relatively abruptly, and the entirety of the final volume has somewhat weird pacing as a result. And from what I remember, no story threads involving any of the side characters are properly resolved.

I began reading this story shortly after finishing Gokusen, which I wasn't quite happy with. Initially, I thought Outrage Girl Shiomi was a better take on a yakuza comedy, but now that I've finished it, I'm not so sure. The story may have been fun, but it was also somewhat unsatisfying.
Was this comment useful?  Yes

Premise Is So Ridiculous It Works
by re_netero
October 17th, 2016, 3:26am
Rating: N/A
It's honestly so ridiculous that it works. Well . . . granted there's only one chapter scanlated so far so that might not be saying a whole lot, however, the premise is enough I think to tell us how great (crazy) this series is going to be. I just hope it lives up to its potential. I already want to read the next chapter.
Was this comment useful?  Yes