Login to add items to your list, keep track of your progress, and rate series!
Description
After the Delpice Empire unifies all kingdoms with brutal subjugation, all the noblemen who stood up to the empire had to relinquish their titles. As her father’s only child, Leyrin Efran becomes a countess overnight, but to secure her family’s title and estate, legally she must be wed!

She enlists info from the infamous Nine Night Guild to find a man of lower rank to keep the empire at bay. They deliver as requested (eep! he’s SO hot!), but things don’t completely seem as advertised...

Official Translations:
English (Tapas, Radish), S.Chinese, Thai, Indonesian, T.Chin... More...
After the Delpice Empire unifies all kingdoms with brutal subjugation, all the noblemen who stood up to the empire had to relinquish their titles. As her father’s only child, Leyrin Efran becomes a countess overnight, but to secure her family’s title and estate, legally she must be wed!

She enlists info from the infamous Nine Night Guild to find a man of lower rank to keep the empire at bay. They deliver as requested (eep! he’s SO hot!), but things don’t completely seem as advertised... 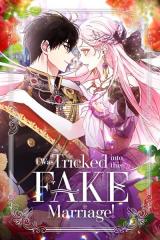 Comical
by SeesARead
May 5th, 2022, 12:07pm
Rating: 8.0  / 10.0
This was a nice light read. It's not a laughing-off-your-chair kind of comic but more of a ridiculous plot, sprinkled with a few chuckles. Some said it was a rushed, non-climatic ending but I thought it fit in well with the theme of the entire series. In fact, I thought the middle chapters were turning a bit too dark and serious. I'm glad the author decided to end it where it did and didn't drag it on further.
Was this comment useful?  Yes

I give a 6 just because I liked it
by Cereris
March 19th, 2022, 4:38pm
Rating: 6.0  / 10.0
I’m sorry but in the last few chapters I cried and not because the manhua had made me cry, but because (also this work) I had a HASTY ending.
I won’t go into too much detail because it seems to be copied-pasted from others I’ve already put in.
In short: reincarnation, fake marriage, and then all the clichés you can imagine.
A lot of things have been left open without explaining anything.
Many issues of secondary characters have been left suspended, although it would have been nice to see them closed.
Including:
Spoiler (mouse over to view)
-Will the goddess of the earth who is pregnant be sealed or not?
- The noblewoman who was sick when she just gave birth and the child, how are they?
- What will happen between the goddess and the cousin of FL?
- Will they ever have children?
- One of the important things on which the plot is based: why SHE among all is the only pure star? Nothing is explained.
- The final race to surrender the throne by the emperor then? No basis but to be with his beloved, who still does not know if he will accept.
Graphic compartment and good plot start. I am in doubt whether to recommend reading or not.

It was like any other contractual marriage you read in modern setting but with super powers. I still can't comprehend
Spoiler (mouse over to view)
why that particular Star was the one who reincarnated. It could have been another person named Star in her place, so what was special about that Star?
Or did I miss something in the story?
Anyway, the point of view changes from time to time without smooth transition. At one point it was Leyrin's inner thoughts then you scrolled down a liiiiittle bit and it was already Dell's.
I was disappointed at
Spoiler (mouse over to view)
how the climax turned out. The story had to orepare for the antagonist for almost a hundred chapters only for it to be resolved in just, I don't know, less than ten chapters? NGL, I was actually hoping the antagonist to cause great havoc but noooo.
Nothing is new with Dell's character. He's the same as other tyrants you read in other isekai manhwa(s) but he looks a lot like Lucas from WMMAP so yeah, bonus point.
It's a good read if you loved fluff. But if you're into deeper story and plot development, please don't.
Was this comment useful?  Yes

The art is very pretty, and in this one the female lead is all over the guy’s looks lol and I fangirl with her when looking at that handsome face! On top of that, the male lead in this one absolutely fawns over her and this is what I read otome isekais for lol, for the hot men that absolutely adore and treasure their women.

Both leads are competent people who have their own lives and work, which is much appreciated. The story focuses mostly on the two characters, but there are some side couples that help round out the cast and give the story a bit of variety. The overall plot is actually pretty interesting too, and actually has to do with reincarnation. Wouldn’t say the plot is anything too novel but it’s sufficiently thought out and played out well. The manga is rather funny too and I laugh out loud (or squeal with the female lead) pretty often. There are misunderstandings but they’re all minor fluff ones that are resolved soon enough and quite funny - no pointless ones nor frustrating dramatic ones, other than her being scared of the male lead for a little too long.

The romance in this one is really cute, even if it is a bit on the generic shallow side (guy falls for girl because she’s special and not afraid of him and cute, girl falls for guy because he could not be more husband material than he already is).

Really no complaints here, though! When I started reading I didn’t expect the female lead to value looks above all else and was like, isn’t this a little shallow? But it soon made sense with all of the glamour shots of the male lead and hey I’m okay with where this author took this. The physical attraction and tension between them is another great bonus. Not every otome isekai has this and I also greatly appreciate this.

I guess if you’re looking for an engrossing plot and deep characters this might not be for you, but if you’re here for fluffy romance, comedy, and tons of man-candy please do give this one a shot!

Artwork is great and story is above average
by Pompina Q
September 14th, 2021, 7:41am
Rating: N/A
Artwork is very nice, the story has enough interesting points and characters in it that it’s a nice read in between other manga’s that I’m completely in love with. I’ve read great (manga) stories with terrible endings that were so underwhelming in the end. So I am content with great art work and a interesting enough story.
Was this comment useful?  Yes

That impotent freak!
by HyperCaster
August 16th, 2021, 7:05am
Rating: 3.0  / 10.0
Well the story is good and character are not that bad either the FL is funny as hell the ML also maintain charms of evil but with sugar.
Just romance is little of bit it's like the writer whoever is making this is trying to hard to keep them apart with no nonsense reasons and bad plot lines, misunderstandings, Sudden interference of background characters, etc. Kinda like at the start but gets boring at the end of season two. #dropped
Was this comment useful?  Yes

My own Thirstiness Tricked me Into This Fake Marriage!
by DarthSiha
February 18th, 2021, 4:21pm
Rating: 5.0  / 10.0
I tried to make it through this because the Art is quite nice but it just doesn't work.
It's another "aggressive psycho gets cured by the power of love" story. The main character is kinda forgettable, the only thing I remember about her was that she was shallow in the first few chapters - but it wasn't shallow enough to make her stand out. The male lead is one of those "warmonger with a heart of gold but only for the woman he loves" dudes. The second male lead gets tossed in there like a decorative lettuce leaf on a steak dish. Noone asked for him, he enters the story at a point where the FL is already in love with the ML and he feels like an excuse for the artist to draw the male leads while he is jealous and angry. The overarching plot ranges from predictable to confusing, wich is one weird balance to achieve but here we are.
Art is great tho.
Was this comment useful?  Yes

Great art, subpar story
by Alwerien
January 5th, 2021, 2:29pm
Rating: 5.5  / 10.0
The best thing about this series is its art. It's truly pleasant and exciting to look or drool at. If only that much effort went into the story and their personalities. None of it is believable - for example other people call the MC sharp, intelligent.....yet she can't recognize someone with same name who she saw up close before? Also he is pretty OP (even cooking genius? lol) but I guess if you don't take it seriously at all, it's fine. It's also like a trope trying to appeal to those wanting to "fix" horrible people since such awful killer turns into lovey dovey husband. And then suddenly that back story about gods, I don't even know what to think. Stuff just keeps coming out of nowhere like pulling random ideas out of hat without previous existing foreshadowing of anything.
Was this comment useful?  Yes