Login to add items to your list, keep track of your progress, and rate series!
Description
Shiina Atsushi, a Japanese-American boy, lives in Japan during WWII. He comes across a Chinese girl, collapsed among the debris of a collapsed building, with a strange glowing symbol on her back. She claims she's from another world that has been destroyed. As she attempts to leave, the military arrive and demand she go with them. Who is this mysterious girl? What will young Atsushi do? 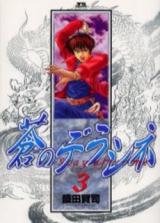 An exemplary story
by milkgreentea
January 31st, 2014, 4:16pm
Rating: 10.0  / 10.0
What I really like about this one is the story's themes, concerning insightful topics such as the horrors of war, the barrier between ethnic groups and the initial cause of war itself. They are well-woven out and both sides of the war are reflected; the characters themselves are the very medium of this aim and the plot itself is thoroughly thought-out and commendable in terms of suspense. The ending gives a solid reaffirmation of the author's message on the roots of war and to forget would lead to the desecration of peace. An excellent work of art.
Was this comment useful?  Yes

Well that ended abruptly.
by whistlebird
August 15th, 2013, 9:32pm
Rating: 9.0  / 10.0
Cyborgs, mutants, people with special abilities, world war 2 guns and ships, and a very idealistic pretty circus boy protecting a pretty girl with a seemingly magic map on her back. Also a few amusing and interesting companions. It's got everything I love. It was exciting, well drawn, the plot was interesting, and the characters were a lot of fun. It was building, building, building in excitement...! And then it ended, and while the ending worked and was satisfactory enough (even a little bit cool) you get the feeling the author had more planned and probably had to end it quickly for one reason or another. I kind of wanted more, a few loose ends hung here and there, but I'm glad it got as far as it did and didn't just leave off on an eternal cliffhanger like most of the manga I read seem to do...

Overall a fun read, definitely worth a look if you like some good old fashioned action sci-fi with good art. I also like how although it was set in world war 2, there wasn't too much bashing of either side (well, they recognized that neither side was completely innocent), and it looked into the more complex issues of race and war and prejudice and the kind of love and friendship that transcends those things--without getting too political (which I would have found annoying).
Was this comment useful?  Yes

the ending is the best part
by bookawkee!
May 17th, 2013, 5:43am
Rating: N/A
it says that the ending was rushed and if it was,its the best part of the series and the one that delivers the best effect while the parts leading to it were very bland,standard shounen stereotypes.
Was this comment useful?  Yes

agreed
by Fixedsys
April 5th, 2006, 3:20am
Rating: N/A
I agree. This title starts off with a real bang..true, its a little dramatic, but it's packed with action. And kudos to entropy for doing such a good job with it!
Was this comment useful?  Yes

very good
by sanoske
April 2nd, 2006, 7:26am
Rating: N/A
a nice series with lot of potential...about a boy in world war II who is japanese-american...it's shounen and has great fighting scenes and an interesting story so far
Was this comment useful?  Yes