Login to add items to your list, keep track of your progress, and rate series!
Description
From Nakama:

1) What are You Looking for?
A very rude but good looking banker named Ryo Masaki seeks the help of poor detective Keisuke Sanjo. This is the first client that he has seen in a very long time... what could he need?

2) Man of One Yen
Continuation of chapter 1.

3) Without Lending and Borrowing
Kanji is in love with Ume who can't seem to say no when it comes to women. After yet another breakup the two go out drinking together and Kanji decides that it's time to make his move on Ume.

4) Something of a Sore Loser
Continuation of chapter 3.

5) Debauchery and Villainy
Kyouichi (Bon) the runawa... More...
From Nakama:

1) What are You Looking for?
A very rude but good looking banker named Ryo Masaki seeks the help of poor detective Keisuke Sanjo. This is the first client that he has seen in a very long time... what could he need?

2) Man of One Yen
Continuation of chapter 1.

3) Without Lending and Borrowing
Kanji is in love with Ume who can't seem to say no when it comes to women. After yet another breakup the two go out drinking together and Kanji decides that it's time to make his move on Ume.

4) Something of a Sore Loser
Continuation of chapter 3.

5) Debauchery and Villainy
Kyouichi (Bon) the runaway successor of a Yakuza group told Kijima "If you hold me right now, i'll go back with you." 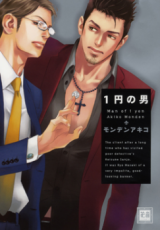 yeah! very nice :)
by kidoraku
April 15th, 2014, 5:36pm
Rating: 8.0  / 10.0
This is a very good story with an interesting and quite original plot, likeable characters and great art. It's not a boring cliché. Drawings are really captivating, full of emotions and pretty, also in my taste (I prefer realistic style). Moreover the characters aren't similar - neither looks nor personalities. Thus makes this manga enjoyable and worth to read. But...

there is but. It was too quick to read. The biggest problem is that the author didn't built tension, not at all, there wasn't time to empathize with characters or to revel in storyline and you know... sex scenes, well... it's not like the mangaka don't have abilities to show characters' emotions or chemistry between them, cause she have (damn good lustful faces contorting in ecstasy - one of the best among yaoi) but mostly one can't tell when they started making love or finished or how do they felt about it. Action is going too fast, there's no tension, no time for feeling the mood. What a pity. This is her first BL so maybe that's the cause. I hope it'll be fixed.

Still it is really good, I wanna read more of this mangaka. I had fun. Enjoy it

Characterization: the ukes were innocent in a way that didn't annoy me. But the characters were one-dimensional. Kouichi had a little more depth in him in the first story, but otherwise his own story left me wondering why he bothered with Ryo in the first story anyway.

Romance: was cute, but was lacking chemistry overall.

Artwork: was, of course, gorgeous.

The length of each story worked against it. I still rate it higher than a lot of the yaois I've come across though.

....
by MirayAllen
September 26th, 2013, 11:35am
Rating: 6.0  / 10.0
The first story is pretty decently developed, considering there are just a couple of short chapters of it. However, this works only as far as the plot goes. And maybe Ryo. Keisuke is indeed adorable but there's something to him that gives him that impression of the Prince Charming who turns up in the end to save the day which didn't sit well with me. He had his funny moments, of course, but on the whole there's too little substance to his character, and his motivations are not that clear. He fell in love all too suddenly for a straight guy, and Ryo was not that likeable or cute for me to buy it. I liked the story as a whole, it was entertaining, if devoid of perfect sense, but I guess I was just hoping for something more.

As for the second story, it was, no doubt, the funniest but still too rushed and even more shallow than the first one for me to remember anything at all by tomorrow. It was predictable, I think.

Now, I liked the third story very much. I would have liked it better if the protagonist this time was not the third-wheel from the first story -- which frankly kind of ruined the mood -- but if you look beyond (and you can, since there's no relation whatsoever between the two stories) it's by far the most compelling one. The characters still lack better development and the overall idea, I reckon, is to get it done with, but it was still quite enjoyable. Of course I'm already reviewing this with the sequel to this chapter in mind.

Unlike my experience with Limiter though, in this prequel I found the art style just delightful. I don't know, maybe it grew on me. Ahah. Gotta love the manly man

Good!
by Namiya
September 20th, 2012, 3:12pm
Rating: N/A
Like the others, I also love that more realistic type of art where men look like normal men (I am a fan of that over the art where the ukes look like grade school girls).
The characters are adorable! I love Ryo, who is such a stoic, serious looking man with a messed up, broken look on romance and has this cute and clumsy side to him.
That's a perfect character! Three dimensional, lovable, like real people.

All the stories are good and worth reading.
Was this comment useful?  Yes

wow. just wow.
by saskiiaa
August 28th, 2012, 7:02pm
Rating: 10.0  / 10.0
I don't even have words to describe the awesome hotness that is Akiko Monden's art and this manga QwQ It makes sense that she has created such strong characters with her expertise in josei manga, and I'm very glad she's tried out yaoi. Her art is just amazing, so realistic! I'm already a fan of Ike Reibun because of the realism, but this art really even beats that.

This is definitely yaoi though, be aware there is no censoring or anything! If that's not your cup of tea, then stay away... and leave it for me XP
Was this comment useful?  Yes

What Awesome Art!
by Dezi
May 29th, 2012, 2:43am
Rating: 8.0  / 10.0
Really, the art in this manga blew me away. One of the best I've seen so far. Of course I went looking for other manga by MONDEN Akiko, but unfortunately they're not scanlated (yet). As for the stories they were good as well. Very hot and also touching.
Was this comment useful?  Yes

:D
by varianthart
May 21st, 2012, 12:53am
Rating: 8.5  / 10.0
The stories aren't bad at all. They're mature, but not heady and have pretty good flow. The biggest draw here for me was the artwork though. It's really gorgeous in a lot of ways. Very technically proficient, but also soulful and expressive. The men look like actual, adult men, and not in an excessive manner. This series does mainly revolve around sex, but the plots aren't ridiculous or forced either. I really enjoyed it.

Oh god, yes!
by misosoup
July 30th, 2011, 10:51pm
Rating: 10.0  / 10.0
The art here is gorgeous, but if that alone hasn't sold you the story is just as stellar.
Masaki is one of those cold beauties that has troubles bringing down his walls, luckily Sanjo is there to break them down for him!
Was this comment useful?  Yes