Hand Which is a set of stories portraying friendship and love between men. Besides its stunning debut, it also includes extra one-shots that are popular among fans.

1. The Hand Which
After being forced to quit his job and getting dumped by his girlfriend in the same day, Sawazu went out drinking with his four university friends to vent his depression. The day just after he announced, "I shall become gay," he woke up to find himself naked and lying beside his good friend Udaka. And after telling the stunned Sawazu, "I've always liked you," and "I won't see you anymore,"... More...
From Dangerous Pleasure:

Hand Which is a set of stories portraying friendship and love between men. Besides its stunning debut, it also includes extra one-shots that are popular among fans.

1. The Hand Which
After being forced to quit his job and getting dumped by his girlfriend in the same day, Sawazu went out drinking with his four university friends to vent his depression. The day just after he announced, "I shall become gay," he woke up to find himself naked and lying beside his good friend Udaka. And after telling the stunned Sawazu, "I've always liked you," and "I won't see you anymore," Udaka left...

2. Shake A Hand
Kuroshima and his college friend Takada have a one night stand. Takada tells him it was no big deal, but Kuroshima can not get the night out of his head.

3. Shoumi na Kokoro [Entirety of a Heart]
A office worker named Tsuzuki begins to frequent the food stand owned by Chikuba. Tsuzuki is an incredibly picky eater, and Chikuba tries to meet the challenge of feeding him food he likes.

4. Shoumi na Kotoba [Entirety of Words]
A continuation of chapter 3.

5. Osewa ni Narimashita [Thank You for Your Help]
Iwata is an illustrator and writer who is not nice to Aono, his live-in housekeeper. Aono falls for Iwata, despite Iwata's violent disposition.

6. Hankei 10 Metoru no Inryoku [Ten Meter Radius Attraction]
High school student Hideaki accidentally stumbles on his older neighbor having sex with another man. He can't get the image out of his mind.


Associated Names
The Hand Which
牵你的手 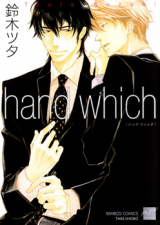 Gets worse with each story
by FeyPhantom
September 21st, 2015, 1:37am
Rating: 6.0  / 10.0
Starting with the first chapter, the stories go in descending order of likeability for me, which probably says a lot for the quality of the stories. I'd probably rate my enjoyment of the first one at ~7.5 and the last one at ~4 with each one getting worse in between. Just not recommended unless you're quite bored and want something to pass the time and you somehow haven't found something better to read. Even then, probably stop after the 2nd story (though it seems some people liked the third -chapters 3&4- so I suppose you could read that one though I didn't care for it at all).
Was this comment useful?  Yes

Shake a Hand was a little darker, but still kind of nice.

The Entirety chapters were pretty cute.

The rest I didn't really enjoy.

I liked that chapters 3-5 had older ukes (one of my favorite things in manga!), though.
Was this comment useful?  Yes

Hand Which the first story was okay, nothing out-standing of course, considering the predictable development and really cliché dialogue throughout, but it was still okay. I don't think Sawazu's feelings for Udaka are anywhere near real so I felt a little bad for the poor guy when the time was up (felt even worse I reckon in the beginning of chapter 2) but well, that's what you get when you read a one-chapter-long story.

Shake a Hand the second story was bad. There's no passion, there's no comedy, no drama, no nothing. It's the story of a very inartistic coward and a cheater. Really bad.

Shoumi na Kokoro the third story is sweet, even if a little rushed; and it was indeed a pity we didn't get to see much of Chikuba's story. Nonetheless, I found the couple strangely compelling. Chikuba is the kind of upbeat and charming Seme that could easily fit with someone as shy and awkward as Tsuzuki. On the other hand, the absence of an overtly dramatic undertone gives them a more realistic appeal, truly Slice of Life-ish, yet refreshing. It's by far my favourite story of the bunch, although it still suffers from the usual issue in Suzuki-sensei's works: pacing. You can't fall in love completely with these characters because the pacing is so rushed, they get to the happily ever after so stupidly quickly, there's no way you can feel satisfied. Still a decent read, though.

Hmmm
by Mochi__x
January 11th, 2013, 8:50am
Rating: 8.0  / 10.0
I liked the first 3 stories, though I wish the 2nd one had been developed more. There was no real love in it, and the comedy was lacking... though I saw a lot of potential in that couple.
The 1st story was the funniest, and I liked both the seme (for his straightforwardness, especially at the end of the chapter) and the uke was just sooo cute. It also made me laugh when the seme realised he was naked ^_^
The 3rd couple was cute too, I liked how we got to see both their pov's.
I was confused about the 4th couple... the writer says that sex with another man is gross, then later on he goes along with it... did he actually feel anything for his servant or what? Since the emotions were lacking in this one, I couldn't like it.
And the final story should really have a shota warning. I personally hate shota so that was a major turn-off for me (besides I couldn't even feel the love between that couple too... I mean the seme not only photographs young boys, but he also has sex with them... did he even stop sleeping with them after getting together with the uke? I doubt it. Also I thought the seme in that story was so unattractive, especially compared to all the other characters throughout the other stories, so I didn't understand why all those young boys were fascinated by him) but if you like shota, then you may like this.
So overall I'm giving this an 8, just because the 1st and 3rd stories were so cute. If it weren't for those two, then I'd probably only give this a 6.
Was this comment useful?  Yes

agree w/ mixed bag comment...
by torride
November 1st, 2011, 8:11am
Rating: 7.9  / 10.0
the first two stories are typical but still entertaining, the third one comprises of violence that is common in slapstick comedy -some may not appreciate it for violence trying to get the 'funny' in you (like Tom & Jerry and how kids find it funny), it's also not my cup of tea but I forgave it, after all, it is just a manga...the last story can be summed up in one word - 'pedophilia' ...that's how I see it, that's how it will stick to me. period.
Was this comment useful?  Yes

I liked chapters 1 and 2
by vforvisitor
March 30th, 2011, 8:09pm
Rating: 8.0  / 10.0
I was struck by the mangaka's art style. Chapters 1 and 2 are very memorable for me because of the art and characters. It was great to see more mature, adult-like characters (regular life in their twenties). I liked everything about Kuroshima's character and his development.

mixed bag
by pleochroic
March 15th, 2011, 1:13am
Rating: N/A
there is one lovely story in this volume; the 3rd, "shoumei na kokoro", the one with the bento stand owner; that's really touching, and has satisfying development for a short oneshot. "hand which", the 1st story, is also cute. but there are 3 stories i don't care for: "shake a hand", the 2nd story has a character who cheats without compunction; ok -- that happens. but he and his new lover are also vehemently "not gay", and i am just dead tired of that stupid trope. and there really isn't anything here that weighs against those black marks; why are these two together? the last two stories each feature a seme i can't like; the guy in "osewa ni narimashita" hits and rapes his servant, the one in "hankei ni 10m no inryouku" is a pedophile who doesn't just photograph young boys for a porn website, but also has sex with them. i think it's not at all "unfair" to call them "abusive rapist" and "pedophile"; they are, and in this volume suzuki hadn't developed that quirky sense of humour yet that later makes her handling of questionable pairings and actions amusing instead of icky; these stories feel too real for me to enjoy.

i am not sure how to rate this; it's well worth reading for the good stories, but while it is a surprisingly interesting debut work, it's also nowhere as compelling as her recent stuff.

oh man i love this one
by cubedude84
January 9th, 2009, 2:05pm
Rating: 10.0  / 10.0
The 3rd chapter storyis my favourite. The one about a salaryman and a bento shop owner. I can completely relate to how the main characters don't quite undestand why they like each other. And that's just how I feel about the story! It's not meant to please every single reader. One of the main characters is so plain- he isn't even near to be good looking. There's no unexplainable sex drives or deslocated sex scenes of any sort. I really think it's just a story about two people liking each other and fighting to be together. But against such ordinary matters it really breaks my heart everytime I read this!

Rush
by ragec
December 31st, 2008, 11:46am
Rating: 8.0  / 10.0
I really think the story was too short and a bit rush in the end. There were many holes and the ending left me hanging. Oh btw this manga consist of 5 different stories. My favorite was the first one and i wish the stories coulda been longer. Not really a big fan of this mangaka but i love the art. Overall it was ok!!

...
by thismomentisfate
December 26th, 2008, 9:12pm
Rating: N/A
i hated the story of the guy that slept with another guy when he has a girl friend. and then they simplify things by the girl friend randomly finding out about what they are doing. neither of the guys feel guilt for what they are doing to this poor girl, they only feel happy that they can date, although they claim not to be gay. doesnt he realize that if he dates a cheated he'll get cheated on himself?
Was this comment useful?  Yes