Login to add items to your list, keep track of your progress, and rate series!
Description
The journey to the martial peak is a lonely, solitary and long one. In the face of adversity, you must survive and remain unyielding. Only then can you break through and continue on your journey in becoming the strongest. High Heaven Pavilion tests its disciples in the harshest ways possible to prepare them for such a journey. One day the lowly sweeper Yang Kai managed to obtain a mysterious black book, setting him on the road to the peak of the martial world. 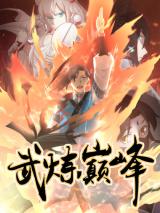 Overrated.
by tiankioo
March 19th, 2022, 2:00am
Rating: 1.0  / 10.0
Chapters that are too short, constant skips where it looks like you missed a chapter or frames, and frankly outright boring. About as exciting as watching paint dry. Chapter after chapter where the MC is constantly wandering around, long discussions with absolutely no substance, having some anticlimatic argument with someone and a really half-assed fight scene,then rinse and repeat, for hundreds of chapters. There is barely any actual plot behind it all. Just a generic xianxia with piss-poor cultivation descriptions and side characters with no personality that are used and quickly discarded.

It's really good
by Helbrassen
July 25th, 2021, 5:41pm
Rating: 10.0  / 10.0
It's really good, it keeps my attention without getting to boring, i've read better but i'm the kind of person where i would take a good but not best manga with 1400 chapter rather than a best manga with 14 chapter. Only problem i've had is that it's sometimes hard to see which character is which, the art in other words make the characters look very similar sometimes, so when a character has a close looking hairstyle like the MC i sometimes mistake that character for the MC, it also happens with other character as well.

8/10 is my rating but since rating this manga a 10/10 is the easiest way to keep an eye on it when new chapters release i'm forced to do so.

The best written MC in a manhua (not webtoon I mean in the Chinese one)
by Maalibo
June 10th, 2021, 10:05am
Rating: 9.0  / 10.0
Honestly the only reason I read it is because the MC is amazing ,I am not going to explain ,just read it ,you won't lose anything
Was this comment useful?  Yes

Quite enjoyable
by weltall2
December 31st, 2020, 8:39pm
Rating: N/A
I thought I would get tired sooner or later due to the immense amount of chapters and felt it would probably drag out things. As it seems, I was quite wrong. The only time I felt "tired. was at around chapter 500 for some reason, but then again it might have been cause I have been reading this manhwa non stop for days. But do not get me wrong, next day I was back at reading it non stop, so I just needed one day to rest from that, which probably has nothing to do with how good this is.

I like the personality of the MC a lot. Even if at times he shows a ruthless side, if you look at the whole picture he is actually quite a neutral character. As he mentioned at a point, his mother taught him to return what he is given multiplied, be it good or bad. At times he even struggles with the fact that even if the logical thing to do is evil, he will regret doing so if he was helped in any way. I would say his personality if just another cold hearted to enemies and warm hearted to friends person, but if you keep reading, you will see him struggle with himself as one of the main aspects, if not the major after of his personality, is that he is selfish. If anything, he seems a mix of different cliché type of OP character personalities, which makes him interesting. You might think that at times he acts evil in order to obtain something from people that have not wrong him before, but he just reminds me how sometimes in RPGs I would too be ruthless in order to get something I want, even if I always prefer to be benevolent.

If I can point out any flaws up to now, is that at chapter 700, take or give, the story there speeds up. Everything goes from slow pace to extreme fast forward. Like "goes there, meets people, subdues people, leaves and instantly meets new people, helps people, leaves". This keeps going for at least a while, where the pace seems fast, as in trying to not delay him becoming more OP and reach faster towards the end. In a way that can be bad, but I understand that after 700 chapters, the pace needs to be picked up, instead of spending numerous chapters just for one "sidestory". I honestly prefer that to the author totally skipping ideas he wanted to add, or just adding that part of the story as just a handful of boxes where it explains how it happened.

OP as this character is, as the story goes at least, it just feels his maxed out stat is mostly his Luck with also the Perseverance attribute. Really enjoying this story for sure and again I am shocked how after so many chapters, I still do not feel tired and want to keep going.
Was this comment useful?  Yes

More refreshing than I had expected, actually (but maybe just due to the MC?)
by noisyparker
August 31st, 2019, 8:28am
Rating: 9.0  / 10.0
While the events of the story are fine but not unusual, there is something about the MC that seemed very refreshing to me, perhaps because I have read a number of cultivation stories with rather toxic or heavily-carried MCs. Due to his background and status at the start of the story, it is not odd that he is detached and self-interested in most of his dealings with other, but he is surprisingly sincere/earnest in responding to kindness.

While he has a calculating nature common to MCs in these stories, it can express itself as insightful deduction, which is more fun, and not so common. Also, his general quiet demeanor makes this aspect of his character more of a hidden blade than something which is is an obvious part of a more overbearing and obviously-cocky MC personality. He comes across as more stubborn/strong-willed/immovable than someone who is trying to move others.

A related note to that, about the story. The setting has not provided any kind of large goal for the MC thus far (just speaking of the manhua... I have not read ahead in the web novel). He does his thing and has goals for personal improvement and such, but outside influences so far are just people reacting (usually badly, as is common in these stories) to his increasing prominence. So, there are dramatic events, but the manhua has not included a dramatic overarching story arc up until now.

For people who like a "practical" MC, I will say that another hidden blade to this MCs quiet demeanor is that he is not especially shy of ending threats permanently. He also has a pretty extreme "bloodthirsty battle maniac" switch that gets flipped when the odds are bad.

edit add: I've since gone on to read ahead in the web novel, and the MC's character is very consistently developed, even as his role in the world grows over time. I feel like it confirmed the impression I had gotten from the manhua and, given the way the manhua has been adapted so far, I'm confident enough to set a rating now, and to suggest people go along for the ride to see how the story is developed.

Well, it's just another cultivation manhua...
by Samken
July 30th, 2019, 6:23pm
Rating: 5.0  / 10.0
It's very average, that's the best I can do to describe it. The plot follows a very structured "weak to strong" scenario, as the protagonist easily climbs the Martial ladder due to "word of god" being incredibly beneficent to him, finding him the right power-ups at the right times, so overall it's an easy and smooth journey to the peak, but that's the usual stuff in cultivation manhua.

People who find value in these stories will undoubtedly enjoy it, as well as people who're reading battle shounen for their first time, the rest will just move on.
Was this comment useful?  Yes

Another cultivation manhua
by PZcolo
January 17th, 2019, 4:36am
Rating: 6.0  / 10.0
Another generic cultivation and martial arts story, nothing particularly good nor bad in this one so far. So only for those looking for more of the same thing, if it's your first try on the genre, better try other options, there are many.

Edit: Gets a little better with time, basically because of the MC, he's a mix of a chauvinist asshole with a good and competent leader, generous and kind to those who stand by him and ruthless to those against him. Story is still extremely generic for the genre but in any case, thou still not a great manhua it's more enjoyable than other cultivation stories.